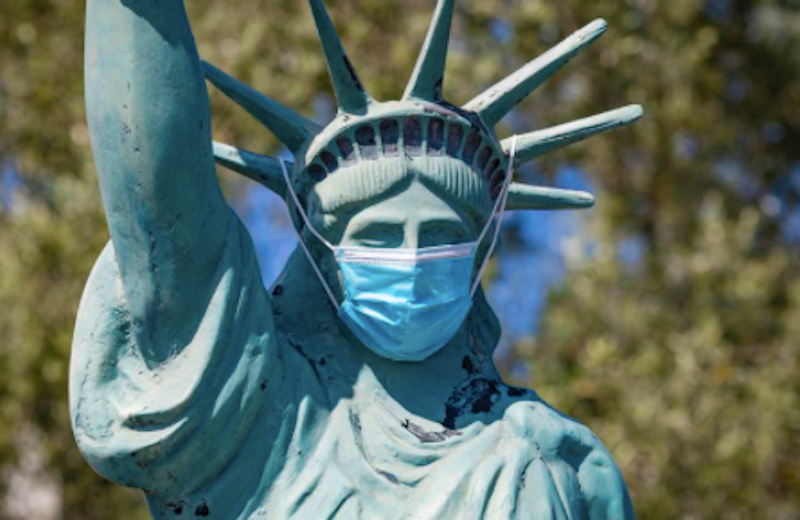 Maybe society’s combined responses to the coronavirus crisis will prove to have been worth it and well chosen, but those responses will nonetheless have exacted a high toll, not just in dollars but also in lost liberties. We can lament that fact even while accepting that the virus poses a real danger.

As usual, the establishment’s preferred responses to the crisis—to any crisis—look an awful lot like the wish list they already had on hand for years. You can’t act surprised when hammer-makers leap excitedly upon a crisis involving lots of nails, once one arises.

So, official responses (active or proposed) now include surveillance, implants/marks, drones, more vaccines, economic controls/redistribution, the institution of Universal Basic Income, more biotech, Net censorship, discouraging of church gatherings, nicotine patches for all, decoupling of the China/West relationship, imitation of China, a shift from theaters to streaming, 5G, healthcare and healthcare-worker subsidies, and slight immigration restrictions. And amidst all the surrounding uncertainty and decreased economic activity, the world's billionaires have reportedly somehow gotten $280 billion richer during the first few months of the CV crisis.

The Net censorship uptick, now rationalized as needed to prevent deadly health misinformation spreading, should be no surprise. Heck, even when lives don’t hang in the balance, Facebook caves to pressure on various non-CV matters, for instance by censoring posts displeasing to the Communist Party of Vietnam, against which I guess we really did lose a war. But then, in countries even closer to home, Facebook may ban you merely for saying you’re proud to be English.

Twitter, for its part, briefly banned the account of the site ZeroHedge back in January for suggesting that CV might have escaped from a Chinese bioweapons lab, an idea that won’t get you banned anymore, now that multiple nations’ intelligence agencies find the notion plausible. God forbid we should let people debate instead of waiting to see which way the establishment/intelligence sector winds are blowing.

Matt Drudge, who always had his pessimistic eco-doomsday side along with his populist-libertarian side and thus may be in a doubly negative mood right now, lately links to things like a piece lamenting the shortage of OSHA inspectors at a time when the regulations say they’re needed to officially “reopen” businesses. What ever happened to the conservative and libertarian movements that loudly said things like OSHA should never have existed? “Reopen” those movements, please.

The mainstream press, more easily sticking to its favorite themes in these times, downplayed the idea men are more likely than women to be CV victims when that pattern began bubbling up from the data, since men aren’t the sex for whom we’re supposed to feel extra sympathy. By contrast, mere days later, having found a formulation to its liking, the press loves asking, as The New York Times has, whether giving men estrogen might help in the current crisis.

So it always is with our feminist culture: Stories about, say, women being shorter than men are offensive and to be avoided, but stories about men being taller than women (and that being an unfair advantage) are encouraged. Same facts, only one permissible narrative.

Meanwhile, at The Washington Post, reporter Amber Phillips, wanting to alarm people about Trump mentioning rubbing alcohol as a disinfectant and thereby causing a run on the product, posts a photo of a $2375 price tag for a rubbing alcohol container while cropping out the visual evidence that the container was a giant 55-gallon industrial drum, not a little plastic bottle for individual consumption. This is the media who claim to be terrified you won’t get the straight facts you need.

The government continues to govern amidst the crisis, and I have mixed feelings about the fact that tough-talking, unafraid conservative types appear to be the ones more likely to show up for work, since legislation is “work” that shouldn’t occur and thus performing it should never be valorized.

A mere six senators, not just Democrats Chuck Schumer of New York and Ben Cardin of Maryland but also Republicans Mitch McConnell, Dan Sullivan, Mike Lee, and Rand Paul, showed up on the Senate floor and unanimously passed the half-trillion-dollar CV bailout/response bill. Someone had to, was the universal consensus among that body’s members, both present and absent, but to have such a high proportion of the fingerprints on it be market-leaning ones is ironic and a bit sad. Better if the government had responded to the crisis by permanently suspending operations.

Stephen Moore, once an ardent free-marketeer and now some sort of populist, at least gets points for breaking with business as usual and familiar narratives—with his suggestion that we reopen the economy by encouraging everyone to wear NASA-like protective suits. “Hazmat, will travel,” you might say. That’s both an ambitious and practical suggestion, though it does make me worry that the establishment is really using this period while we’re shut in our homes to terraform the whole planet, leading to us emerging in a few months into an unrecognizable (drone-filled, digitally-tattooed) outdoors.

One person looking more and more likely to have a hand in any such terraforming and tattooing, Bill Gates, has now, like the Obamas, bought a mansion right next to an ocean, on one of the flattest pieces of land I’ve ever seen, despite being a climate change alarmist who ostensibly thinks the oceans are going to rise, easily swamping such precarious spots. The elite talk the talk on global warming but let the plebes walk the walk—while the elite buy up any land surrendered or made less pricey in the process.

Real estate usually comes before principles, as years of listening to the conversations at political cocktail events in Manhattan taught me, back before CV nudged us all to do the smart thing and just stay home. If and when I reemerge, maybe it’s time I go to places where they tell very different stories.