NPR's cutesy coronavirus coverage has been awful, second only to Fox News. 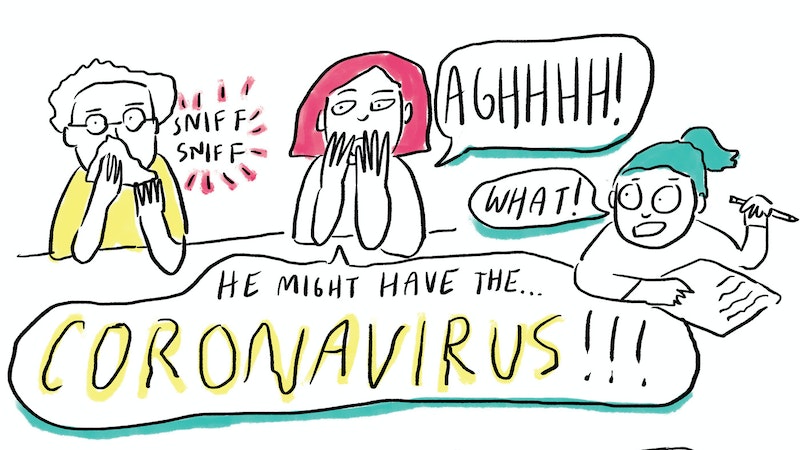 A comic for children

No surprise that a majority of Americans believe the government is lying to us about COVID-19, its origins, and its potential cure and treatment. Robert Griffin, the research director of an organization called Democracy Fund Voter Study Group (started by eBay owner Pierre Omidyar in 2011), played dismayed and disturbed when talking to a reporter about Americans’ distrust and nihilism: “To see about a third of people give that some level of ‘Yeah, that might be true,’ that was pretty shocking to me… That’s a pretty dark type of thought to be floating around the public.”

Dark thoughts…floating around the public… you're listening to This American Life... the CDC and the WHO lied to Americans about the need to wear masks for weeks because there was a shortage of PPE for healthcare workers. NPR has not criticized any organization or official at length during the pandemic except Donald Trump. Shocker, I know—but that lie about masks, which went on for weeks, was bipartisan. I understand the government was nervous about sending the public into a panic buying medical equipment for personal use when there wasn't enough. This is an astonishing indictment of our entire country and its institutions. I have little optimism for the way this plays out longterm, and the media are making it worse every day by allowing everyone in charge off the hook.

But no, you do not need a hazmat suit to go to Whole Foods (just don’t try to start a union anywhere near their thermal guns).

Second only to Fox News in abominable coronavirus coverage is NPR, which has done more to launder conservative values and a mindset to a largely suburban and liberal audience that listens without questioning or even paying attention. It came out after the murder of Freddie Gray when they joined in the national smearing of Baltimore, falsely claiming that multiple major riots had occurred in the city and looting was widespread. Breaking windows with trashcans and looting a pharmacy are not the same thing—a CVS in West Baltimore was pillaged and burned, but a variety of people sampled what was on offer: a couple detectives in the Gun Trace Task Force took what they could grab and incorporated into their already significant side-enterprise.

That story is a lot harder to find than the dozens upon dozens of hyperbolic hit pieces on the citizens of Baltimore reacting to cops in tactical gear antagonizing them. NPR isn’t any better than Fox or Breitbart on this front. No, they don’t air stories about Barack Obama being a Kenyan Muslim, or a homosexual prostitute—what a high bar.

NPR are not the only offenders. Yesterday on NBC, I saw an anchor broadcasting from her home in a white t-shirt that read "TUESDAY" in big black type. I assume she has the rest of the week covered. Anyone trying to make the quarantine cute or fun or silly is trying to make something very serious into something frivolous. This is not a vacation, and it's not a time to seek cheap attention out of boredom. Put some effort into your quarantine work, whatever it is—just don't pretend you're special. Everyone's up to something new.

Remember too that the mainstream media didn’t take COVID-19 seriously much sooner than President Trump (playing that compilation of politicians and media figures downplaying the threat of the virus at a recent briefing was very shrewd). When I shot On a Day That Doesn’t Exist at CPAC during the last two days of February, none of my friends saw a quarantine coming. I didn’t even bother asking anyone at the conference what they thought about the virus because Fox, Trump, and all their lapdogs were still calling it “fake news.” A few days before, I asked another friend—a Boomer doctor for Biden—what they thought of the virus. “Oh, I mean, if you get it, you’ll probably have to be hospitalized, it’s not a big deal.” Mouth agape!

This was still H1N1 thinking. Yes, that disease killed 10,000 Americans in a year, and now no one doubts we’ll hit 100,000 coronavirus deaths by June 1. A Great Depression for the new century is on its way, and NPR is already aligning itself with Fox in questioning and shaming the poor and unemployed: “The government is now offering $600, the equivalent of $15 an hour, or double the federal minimum wage, to people who've lost their jobs because of the coronavirus. A Kentucky cafe owner says she's had to close because her workers make more staying home.”

Most of my friends work or have work in coffee shops, under varying degrees of management stupidity. I’ve never known a smart coffee shop owner (but I’ll keep my mind open). Sky Marietta owns a coffee shop in Kentucky—or did. NPR helps her in shaming those filthy employees who want a living wage: “But the extra money can create some awkward situations. Some businesses that want to keep their doors open say it's hard to do so when employees can make more money by staying home.” This is a problem with the business, not unemployment, and certainly not with the judgment or constitution of the employees who know a good deal when they see it. You can’t pay people starvation wages and expect them to come back for less.

Marietta goes on: “‘We basically have this situation where it would be a logical choice for a lot of people to be unemployed… We have these lovely baristas, they’re hardworking individuals. But literally this is the best possible pay of their lives they could possibly get, to be unemployed.’ She worries about what will happen to those workers when the federal unemployment benefits run out at the end of July. Maybe by then, she'll be able to reopen.”

When it costs people “hundreds of dollars a week to be employed,” there needs to be a minimum wage increase, or unemployment will continue to swell and people will “abuse” the program, like Marietta implies her employees have. NPR never questions these right-wing, conservative ideas—this wouldn’t be alarming if they weren’t one of the most prominent “liberal” media organizations in the world. At least MSNBC has completed its heel turn into Fox’s opposite, but NPR still delivers its true crime exploitation and twee cooking shows in hushed tones denoting “respectability” and “decorum.”

Listening to NPR talk to its audience like they’re babies (Learn how to clean your mask with Sheilah Kast! And at noon, Mo Rocca is going to show you how to wipe your ass!) makes me want to open my veins. These are the people Bret Stephens was talking about in his dreadful Times column: elites who think most people have guest rooms or $1000 on hand at any time for an emergency.

NPR, along with the rest of the mainstream media, condemned these people as irresponsible, stupid, and poor. Many of them certainly demonstrated a remarkable lack of compassion when they spit in nurses’ faces and told them to “go to Hell,” inexplicably, as if doctors practice partisan bias in the operating room. These were not purely astroturfed protests, but either way, they’ll be used to demonize the poor and dying by NPR and like-minded organizations.