Warren Boxed Herself Out of the Race

Always locked in an unwinnable contest with Bernie Sanders over who could be the most ambitious progressive. 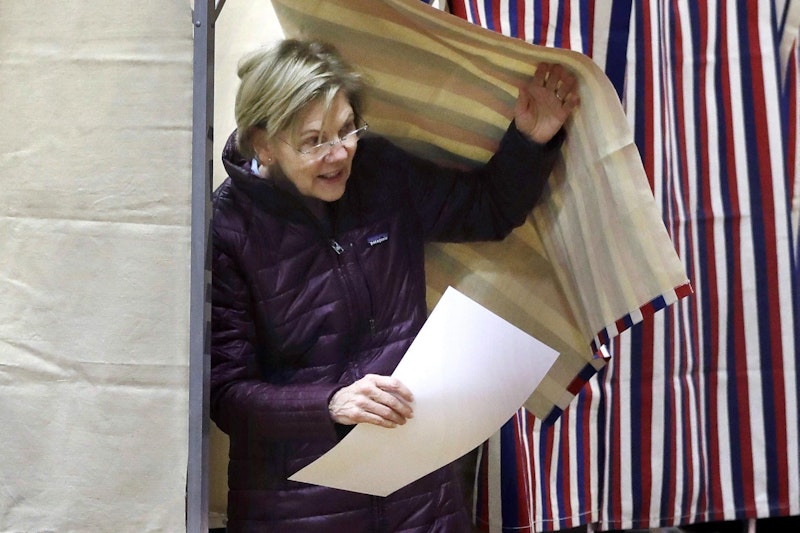 It’s no surprise that Elizabeth Warren’s campaign was supposed to be about “big, structural change” (has anything wonkier ever been printed on the back of an RV?)—she has built her career around the idea that fundamental reform is necessary in Washington, particularly in financial regulation, anti-corruption, and consumer protection. During the campaign, she often touted her record in these areas (such as the establishment of the Consumer Financial Protection Bureau) as evidence that progressives can get big things done.

Although Warren put issues like corruption and Wall Street regulation at the top of her agenda, she knew she couldn’t just run on her areas of expertise. From her plan to enact a $3.8 trillion wealth tax to student debt cancellation and free college to the breakup of big tech companies, she developed a sweeping populist platform that propelled her to the top of the field by fall. However, after Warren endorsed Medicare for All, she struggled for a plan that could simultaneously avoid alienating her more moderate supporters while siphoning progressive support from Bernie Sanders—a difficult task, considering the fact that Sanders “wrote the damn bill” on the issue.

Medicare for All may have been the biggest mistake of Warren’s campaign. She became a target when she surged in the polls last fall, and was relentlessly attacked for failing to explain how she’d pay for her healthcare plan. For example, during an October 15 debate, Pete Buttigieg argued: “Your signature, senator, is to have a plan for everything. Except this.” For a candidate who positioned herself as the arch-wonk in the race, this was a wounding attack. Meanwhile, Amy Klobuchar accused Warren of misleading voters: “At least Bernie’s being honest here and saying how he’s going to pay for this and that taxes are going to go up.”

Warren repeatedly failed to explain how she would pay for Medicare for All. She faced this problem for months—just look at this July interview in which she couldn’t answer a simple question (posed again and again) about the tax implications of her plan. After Warren’s poll numbers peaked in early October, intensifying criticism of her healthcare plan coincided with a steady decline in support from which she’d never recover. Even after she finally released her $20.5 trillion proposal in early November, her support continued to collapse. “She’s making it up,” Joe Biden said about the cost of her plan after it was released.

Warren’s embrace of Medicare for All was indicative of a deeper problem with her campaign: she was locked in an unwinnable contest with Sanders over who could release the most ambitious set of progressive policy proposals. Warren offered to eliminate most student loan debt; Sanders offered to eliminate all of it. Warren said child care should be “free for millions of families and affordable for everyone”; Sanders said it should be free for everyone. Warren’s wealth tax was supposed to generate almost $4 trillion; Sanders expected his tax to raise $4.35 trillion. Sanders emphasized the fact that he’d introduce Medicare for All “in my first week in office,” while Warren’s plan wouldn’t have introduced a full single-payer program until the third year of her first term.

Even though Warren released much of her platform earlier than any other candidate, it was clear that Sanders had pulled her much further leftward than she ever would’ve gone on her own. Things would’ve been different had Warren run in 2016 at the behest of progressives who wanted an alternative to Hillary Clinton, but by 2020 Sanders already had a formidable base of support, name recognition, and fundraising infrastructure. With an avowed socialist as the progressive standard bearer in the party, it was much more difficult for a candidate like Warren to distinguish herself.

Many Democratic Congressional candidates will face a similar problem in the coming years. Organizations like Justice Democrats and Alexandria Ocasio-Cortez’s Courage to Change PAC will continue to support primary challengers who reflect the priorities of the Sanders left. Candidates will have to pass a series of rigid ideological purity tests: Do you support Medicare for All? Do you support a multi-trillion dollar Green New Deal? Do you support free college, free childcare, and massive debt forgiveness programs? Despite the fact that Democrats reclaimed the House in 2018 by fielding moderate candidates who won over suburban voters hostile to Trump (FiveThirtyEight refers to these suburban areas as “Romney-Clinton districts”), the party’s progressive wing will only intensify its attacks on the center in the coming years.

One likely reason Warren decided not to endorse Sanders is the fact that she doesn’t actually align with him as closely as their platforms would suggest—particularly on what’s practically achievable. Warren understands that political capital isn’t unlimited. When she first ran for Senate in 2012, she rejected Medicare for All and argued that Democrats needed to defend the Affordable Care Act: “I think the urgent question now is whether we’re going to be able to hold on to the health care reforms that just passed.” She’s clearly sympathetic to Medicare for All, but other concerns would’ve taken precedence in a Warren administration.

For example, Warren made it clear that one of her top legislative priorities as president would’ve been the passage of comprehensive anti-corruption reform—a measure she regarded as necessary to undergird the rest of her platform. As she put it in an article that outlined her “plan to end Washington corruption,” the passage of conflict of interest laws, tax disclosure requirements, restrictions on the “revolving door” between the public and private sectors, stronger lobbying rules, etc. would make it easier to pass and implement legislation on healthcare, climate change, criminal justice reform, and a range of other issues. She wouldn’t have burnt precious political capital trying to uproot the American healthcare system when she had a real chance to enact the reforms she has championed for years.

But she didn’t tell voters that. Instead, she told them big, structural change could happen all at once—the healthcare system could be revolutionized, a massive anti-corruption initiative could be launched, college would be free, debts would be forgiven, and a multi-trillion dollar wealth tax could help pay for everything. Warren could’ve gone further if she’d promised less—a lesson the next generation of progressives will almost certainly refuse to learn.