Media is Condescending and Hypocritical During Pandemic

Is it a coincidence that everyone advocating for indefinite lockdown has a job? 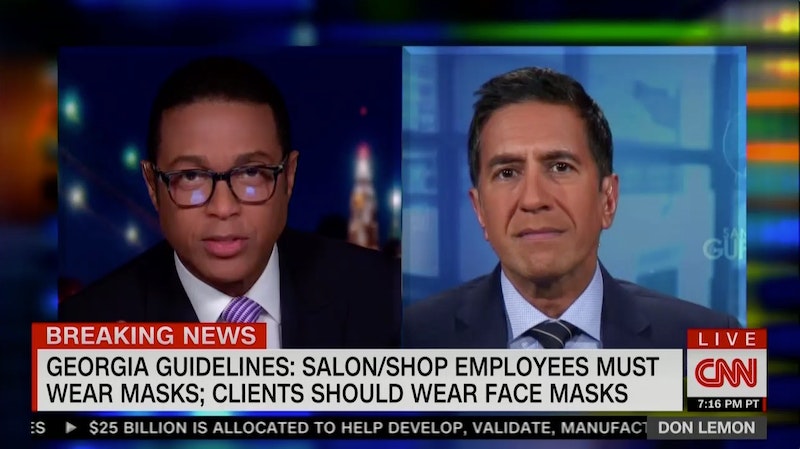 Georgia decided to reopen its economy, news that didn't go over well among the Democrats. The Washington Post wrote about Georgians' fear of an uptick in COVID-19 deaths. CNN noted that Georgia mayors have warned that the crisis isn't over yet. These are legitimate concerns, but there was no media coverage of the extensive restrictions that Georgia placed on businesses that it's allowing to operate—gyms, tattoo parlors, movie theaters, bowling alleys, and nail salons, etc. Those businesses will have to screen workers for COVID-19 symptoms, enhance sanitation in the workplace, requires employees to regularly wash their hands, prohibit workers from gathering, and insist that employees take breaks and meals outside. That's just a partial list, but this list is news. The lockdown can't go on indefinitely, and people need to start learning about safety measures that will be taken once it's lifted. But the media won't report on this because, in their minds, people who want to end the lockdown are indifferent to human life.

Time will tell whether or not Georgia's doing the right thing, but it would be difficult for a mainstream media consumer to learn that it's not going to be business as usual for those Georgia businesses that are reopening. The reason can be summed up in one sentence: Republicans are so greedy that they're willing to sacrifice lives for their own economic benefit. That's the media narrative now. Democrats are compassionate, caring people, while the Republicans are cold-hearted capitalists. This rigid binary doesn’t bode well for the future, as we need to start the debate over how and when to open the economy instead of shaming anyone who's "callous" enough to broach the topic. We also need to discuss the serious economic consequences of keeping the lockdown in place too long. A wrecked economy can destroy lives just like a virus can, but the media either doesn't understand this, or wants no part of it.

The media gives us only bad news about the pandemic. The first indication was the early, exaggerated reports that the death rate for those contracting the virus was above three percent. If you questioned this, it meant you were a science denier. Science at the time had already determined that there were many asymptomatic cases, but they weren't factored into the equation. The actual mortality rate turned out to be under one percent (way under that for healthy people), so who were the science deniers?

The media also leads us to believe that every state should adhere to the exact same lockdown policies, regardless of how hard the coronavirus is hitting them. By this logic, Wyoming, which has experienced seven COVID-19 deaths and is sparsely populated, should proceed just like ravaged New York City.

New York City is by far the nation's hardest hit area. That's also where the media is centered, so we're getting NYC-centric media coverage, which may not be relevant to someone living in Wyoming. It's not much different in Washington, D.C. The Washington Post recently ran an article suggesting the key to escaping the lockdown is to sleep in your guest room and pretend you're on a trip. The accompanying photo shows a couple sitting on a balcony as they enjoy a comforting view of the ocean. Which group of people is this fantasy advice "key" to? Probably not those concerned with paying their rent or waiting in food lines.

It's the people who can't play pretend that the liberal media are supposed to empathize with, but it prefers to either mock or ignore them now. Responding to a media report that an early denier of the coronavirus' impact had died, I noticed that one Twitter commentator said that he hoped that the guy had died an excruciating and dehumanizing death. Undoubtedly, this person considers himself a liberal who's morally superior to conservatives, even though he'd wished torture upon a person who'd lost his life after having been duped by Fox News.

The worst behavior from a New York City media personality that I've seen came from CNN's Don Lemon, which is hardly a surprise. He railed against the anti-lockdown demonstrators who've taken to the streets so they can get "haircuts" and "play golf." To people he hadn't bothered to ask about their motivations for protesting, Lemon shouted, "Who the hell do you think you are?" Who does pampered Don Lemon, who still has his lucrative job and a CNN employee to make his hair look great, think he is to make such assumptions about people who may no longer have a job and have no idea when the government will let them work again?

Eventually, every nation is going to be forced to follow the Swedish pandemic model. Life will return to semi-normal while those in high-risk categories will have to take extra precautions. The sooner the media understands this, the better off we'll be.