Missing the Point on Baltimore 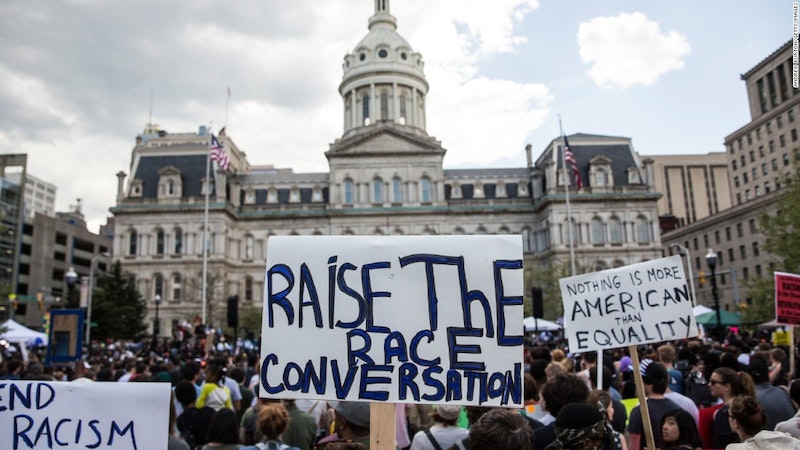 It’s unremarkable that the “Comment” opinion in the May 11 issue of The New Yorker addresses the disastrous events in Baltimore during the past two weeks. What is remarkable, however, is that the author, Jelani Cobb, an acclaimed black author/professor, offers not a single idea about how cities like Baltimore, whose population is predominantly African-American, can improve conditions for its citizens. Instead, Cobb offers, in general, a history of racial violence in American cities since World War II and the resulting white flight from urban centers, and in particular, a brief run-down of Freddie Gray’s death, which he calls “a not unfamiliar journey.” It’s a repetition of probably a thousand similar op-eds that have appeared in the past week, and isn’t especially illuminating. He adds, parenthetically, this condescending observation: “It’s worth noting our tendency to think of declining, mostly white Rust Belt cities elegiacally, and of largely black ones moralistically.” I doubt the people in, say, Buffalo or Pittsburgh, would agree.

Cobb correctly notes that Baltimore’s elected officials, including the feckless mayor Stephanie Rawlings-Blake, the police commissioner and the State’s Attorney, are black, but that hasn’t changed the city’s fortunes. What he doesn’t say is that it doesn’t matter if the mayor is black or white: he or she (Rawlings-Blake follows the disgraced Sheila Dixon, Martin O’Malley and Kurt Schmoke, dating back to the late-1980s) is still in hock, politically and even ideologically, to the developers who’ve flocked to the Inner Harbor (and east) tourist area of the city. Tax breaks are lavished upon companies who would likely locate there without incentives: yes, when James Rouse’s Harborplace was first proposed in the late- 70s—and opened in 1980—these perks were necessary, but that’s no longer the case.

Here’s a hobbyhorse that I share with many Baltimore city residents: whatever happened to the homesteading initiatives of a generation ago, the kind that young entrepreneurs like Bill Struever used to re-fashion South Baltimore’s Federal Hill? There are so many vacant, boarded-up buildings in Baltimore—some from the ’68 riots—that are just waiting to be refurbished. Doesn’t it make more sense to sell these properties—at least those the city owns—to people for a nominal fee, and provide tax assistance and affordable mortgages to them as they’re being rebuilt, rather than lure another hotel or restaurant chain to Fells Point or Canton? This is perhaps a small step in giving more reality to Baltimore’s now-forgotten slogan “A city of neighborhoods,” but it’s an improvement over the status quo.

John Angelos, COO of the Baltimore Orioles (and son of owner Peter Angelos) was eloquent last week in minimizing the importance of Major League baseball games—even as the franchise lost money by playing once to an empty Camden Yards and then re-locating to Tampa Bay to play a three-game series—in the light of the protests over Freddie Gray’s death. The Angelos family, which is wealthy, could go one step further and establish summer baseball leagues in East and West Baltimore, constructing fields and providing equipment, another example of reaching out to Baltimore’s disadvantaged youth, as well as providing employment.

Cobb doesn’t touch the liberal, especially among Democratic politicians, allegiance to public sector unions, but Ross Douthat, in a very smart New York Times May 3 op-ed, does. In describing the clout the police and teacher unions lord over politicians—and Douthat, a moderate conservative, admits that the right rarely criticizes anything to do with the police—the columnist details the corruption and unchecked power these two organizations have in a city. He notes that both teachers and cops enjoy, at least in some quarters, “reservoirs of good will” because, contrary to the more hysterical voices, many teachers and cops are “heroic.” Yet the unions protect bad and sometimes dangerous employees, and as Douthat says, it’s “necessary to restrain the excesses” of police departments. “[That] can only happen if we reckon with the ways in which police unions, no less than other interest groups, can align against the public that their members vow to serve.”

If these unions were disbanded, who’d take up the slack of suddenly unfilled positions? I imagine that both professions would, at least temporarily, be attractive to young men and women, as long as a decent salary and benefits were provided. In cities like Baltimore, the culture of civic servants is rotting, and a lot of that has to do with the union leadership, which is more concerned with political power and tenure, than the quality of its employees. Such a structural change would be radical, but who’d argue that bold action is required?