We'll figure out the senator eventually. 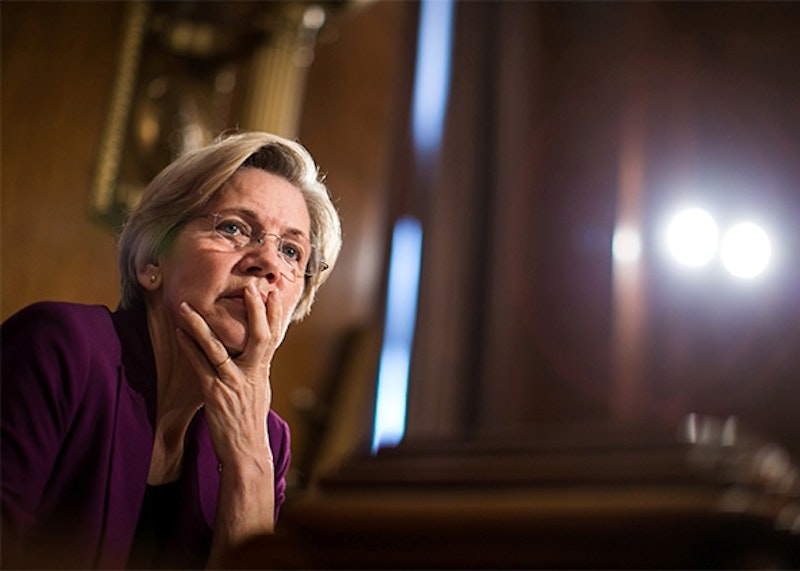 Every time Elizabeth Warren wins, it's at Barack Obama's expense. He names the appointees who get scalped, he backs the compromise bills that she battles against. Who's right? I bet she is. Who should we follow? Oh gee, I don't know. I wish I did, given that Congress is now looking over the Trans-Pacific Partnership. Obama negotiated the deal and wants it passed. Warren isn't happy—“No more secret deals,” she says. The agreement's text can't be published, but a few sections got out because of Wikileaks. Among other things, it looks like the agreement would allow a multinational to sue its host government for decisions likely to hurt the company's profits. “Say, laws that protect consumers from unsafe products or unhealthy foods, that protect workers, block toxic emissions or prevent another taxpayer-funded bailout of Wall Street,” says Robert Reich, who used to be labor secretary. Has Obama fixed it so that progressive government in America (and Chile, Singapore and Australia, etc.) will be impossible? Reich thinks so, and Elizabeth Warren sure seems upset.

At this point it would be good to have some detailed idea of the Massachusetts senator and how her mind works. But the press has stuck with a finger paint version. The latest example is from Ryan Lizza at The New Yorker, who reminds us how words get slopped about when the fancy press says little. From his new profile of Warren: “Warren did not predict the subsequent financial meltdown in all its particulars, but her warning about the dangers of unregulated lending was prescient.” One imagines Margaret Dumont inclining her head toward Groucho Marx: “Mr. Rittenhouse, Warren did not predict the subsequent financial,” etc. All right, Mrs. Dumont would have had “Senator” in there, but otherwise it plays.

The profile covers much the same ground as Politico's big piece on Warren in March. The two start with Warren's betrayal by Hillary (who voted for the 2005 Bankruptcy Act) and continue to her betrayal by Obama (who didn't choose her to run the bureau she started). There's a dropped-in bio on how she came up the hard way (dad's death, single mom) before making herself a law professor and a nationally known expert on bankruptcy. Examples are given of the Senator's clout in office, with quotes by political mavens about how she's playing her hand. Verdict: as long as she doesn't run for president, Democrats in Congress will fear her as keeper of the base's wrath. If she does run, the jig is up.

Why? Doesn't say. I guess either the magic is gone or there's no leeway for Dems to help her without screwing Hillary. The New Yorker is also hazy about where the Senator's clout comes from. The article is so off-hand when mentioning Warren's “nationwide fund-raising network,” it sounds like the network was thought up by the person speaking in the sentence just before, an Obama aide. Like Politico, The New Yorker doesn't have much time for the central fact about the Warren phenomenon: that's there an army of people willing to give her money and punish her enemies because the Senator is against Wall Street and they have been burnt so thoroughly.

Lizza's bit of value-added is a section about Warren's alliance with small-time bankers. When the legislation for her Consumer Financial Protection Bureau had to get through Congress, Warren sat down with the community banks' top lobbyist. The result, eventually, was that the small banks kept quiet about her measure, leaving the big banks to advocate against more regulation without any p.r. cover from the little guys. Another result was that the new bureau doesn't examine little banks, just big ones.

Warren's reasoning was that… well, here Lizza becomes hard to follow. You have to pick bits of explanation off the article and mash them together, like they were lint. Once mashed, they suggest maybe that local banks already had enough oversight because they weren't rich enough to absorb and neutralize their regulators' efforts, whereas the big banks did have the money to absorb such efforts and therefore needed this further layer of regulation, which would be enough to do the trick. That might be it. As for figuring out the Trans-Pacific Partnership, I won't get my hopes up.