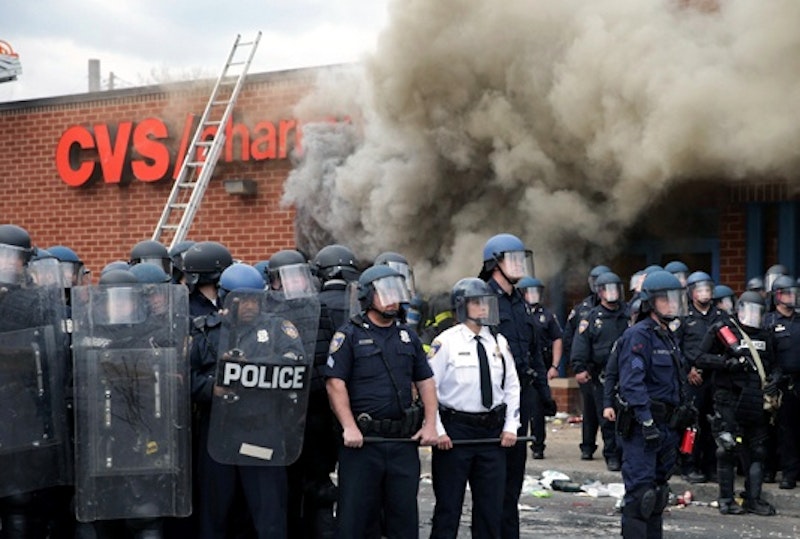 We’re living in a Philip K. Dick book. People are expressing solidarity with a pharmacy. Je Suis CVS. Je Suis un putain de crétin. Thick brown smoke billowing out of the windows next to that instantly recognizable logo, three bolded red letters huddled close: CVS. Brands in America have more cultural cache than black lives. That CVS logo is like a cartoon character or a buddy everyone knows. I can’t wait ’til we finish Minority Report and get to VALIS. There’s no mystery to what’s happening right now: the USA was built on the blood and bones of black people, captured in Africa like animals and carried like cargo across continents. For 400 years. In schools, the virtue of the Founding Fathers is never questioned, and every inch of the knife removed held up as examples of our “exceptionalism” and the unstoppable promise and progress of our great, amazing, absolutely-the-fucking-best country in the world. The USA is black genocide in slow motion. Comfortable people see the CVS being raided and razed and scoff, “Well I would never do that.” Because you don’t live in a fucking ghetto, and neither do I.

My father wrote yesterday: “Bigotry of all kinds exists, obviously, but at the risk of naiveté, I don’t think that defines the United States.” Bigotry is what built and sustained our country, and none of this was ever resolved. MLK is used to chastise black people who white people believe are acting disruptive because he’s non-threatening and very dead. There are cries about a smashed 7-Eleven that will be repaired, but indifference over a human being who was tortured and accidentally killed by white cops who live nowhere near West Baltimore, carrying on as if they’re handling cargo. “We gave him a run for his money,” one of the cops allegedly said in the van. Violence for sport, sadism for its own sake, and sociopathy in the police force—vets that walked the street of Fallujah treating citizens of Baltimore like terrorists.

Being black in America is a disability and a crime. White Americans have a more personal relationship with a CVS than a black man on the street. And for the second night in a row, the police and National Guard presence in predominantly white neighborhoods like Station North, Charles Village, Hampden, and Mount Vernon is practically non-existent, and breaking curfew won’t get you thrown into central booking. Meanwhile, Penn and North still looks like the Middle East.

If the six officers were arrested, none of this would have happened, and when they’re exonerated, inevitably, on Friday, the eruption will be intense, and that’s exactly why the National Guard was brought in earlier this week. Turns out one of the officers involved was extremely unstable, a Chris Kyle American Sniper situation. Baltimore’s de-facto segregation, plain to see here every day, is finally getting attention all over the world, as well as the blissful ignorance and affluence of the blue blood prep school scum I hate. Too many people are shocked and disgusted when they see chain stores being destroyed, because it’s a familiar face. But as Deray McKesson explained to Wolf Blitzer: “Broken windows are not broken spines.”