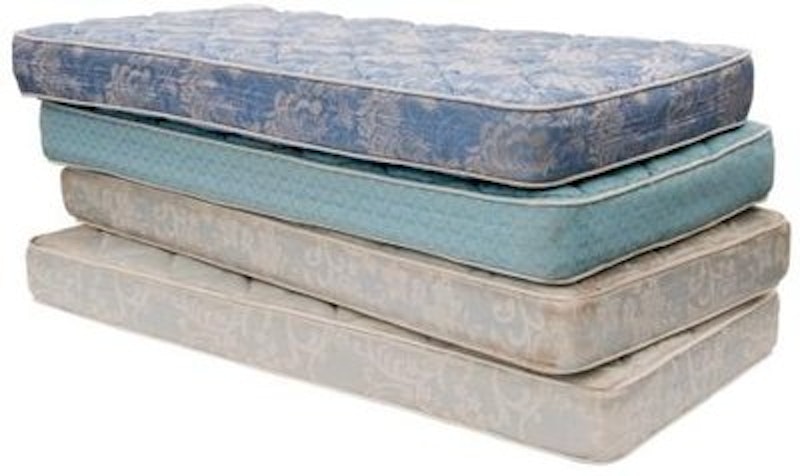 There are two people in America who won't sue each other. One is the girl carrying that mattress, the other is the guy who she says raped her. Why no lawsuit? It's hard to say. “I think right now I have a lot on my plate,” the girl told a reporter, meaning her mattress project. She has sworn to lug the thing around school until the boy leaves or graduation, which is now in a few weeks. But she could have sued if she wanted; she chose the mattress. The boy's lawyers are equally elusive. The kid recently filed suit, but not against the girl, just against their school and certain people who work there. “This case is not about Emma Sulkowicz,” says the boy's lawyer. “It is about Columbia University and its ivy-covered halls, and the responsibilities it owes as a place of higher learning.” To risk imitating Aaron Sorkin, I'd say the case is kind of about Emma Sulkowicz—she's the person carrying the mattress. Paul Nungesser, her ex-friend, might sue the girl and also the school. But whatever.

The kid's suit contains embarrassing Facebook messages that the girl sent him. He released some of these a few months back; those established that she came off as quite friendly after the alleged attack. This new batch is supposed to blow her out of the water. Over at Reason, a journalist lets out a sharp sigh. “Those in the media who uncritically re-reported Sulkowicz’s claims and gave credence to her antics should be feeling rather ashamed of themselves,” he says. Well, I don't know. Being critical of Sulkowicz is fine by me, but the messages appear a long way from damning.

All right, she seems to have been very interested in Nungesser during the summer before the incident. We see “Paul I wuv you so much. Please stay w me foevah” and “DUDE I MISS YOU SO MUCH” and a bunch of other messages, and there are more caps toward the end of the bunch than toward the start, so it's like she was getting herself into a state. On the other hand, texts are cheap and the girl seems to have a mouth that runneth over. “Emma's yearning for Paul had become very intense,” the suit says, pointing at the messages. Maybe. She gushed a lot, that's for sure.

According to the fellow at Reason, the girl's a liar because she says she and Paul never “discussed” anal sex prior to his performing it on her. The suit highlights this message: “fuck me in the butt.” Powerful words, but I would describe them as goofing, not discussing. The suit tells us the girl displayed a “history of alleging sexual assault.” The boy says she told him she was raped in high school, and the suit tells us she made further allegations in her messages to him. No. Apparently the girl had the kind of freshman sex life I wanted to have. Along with that life come some hazards. She bumped into a few, and she talked about them with her friend Paul. What she didn't do was cry rape. Read through the part of the lawsuit with the messages. Where does she say she was sexually abused? She describes an incident that we might call abuse. But she doesn't call it that. Of course, somebody might be perfectly truthful and level a few rape accusations during her college and high school years. It's just that the girl didn't, and the suit wants us to think she did.

Why Columbia? Yes, if the girl's mattress-carrying does represent bullying and harassment, then the school shares blame. It's a school project, after all, done for credit, and her professor helped the girl get the idea (such as it is) into shape. Also, her claims were first published on a university blog, the Columbia Spectator printed the boy's name before he went public, and the university kicked in $1000 to help clean up after a campus rally where the girl was a speaker. All this was after a university investigation found the boy innocent. Oddly, the boy is suing not just the professor and the school but also the school's president, citing some public comments about the case that to a non-plaintiff sound painfully generic.

Here's a twist. Under New York and federal law, a college has to make sure all its students have an equal shot at an education regardless of their sex. Apparently, there are no other laws under which a college can be sued for allowing one student to parade about the campus while accusing another student of a terrible crime. Therefore, the suit describes the mattress stunt as “prolonged gender-based harassment of and gender-based misconduct as to Paul,” and we're told that Columbia has “intentionally discriminated against Paul on the basis of his male sex.” Intentionally? You could make a case for “effectively,” in that a guy is more likely than a girl to be accused of rape, so that official toleration of a false and publicly repeated rape accusation could represent a special obstacle that he faces because of his sex.

Sulkowicz's response to the suit is that it's “ridiculous.” Among other things, she says, it's ridiculous that her ex-friend would see her mattress project “as a 'bullying strategy,' especially given his continued public attempts to smear my reputation, when really it's just an artistic expression of the personal trauma I've experienced at Columbia.” That “when really” is classic. As the suit details, she told an interviewer that the message her project sends Columbia is “Get my rapist off campus.” Having read about this case, the best I can say is that I'm glad they're not my problem. Good luck, Columbia, but you let them in.