Milo’s the Britney Spears of the Right

Using a ghostwriter for Dangerous diminishes his standing. 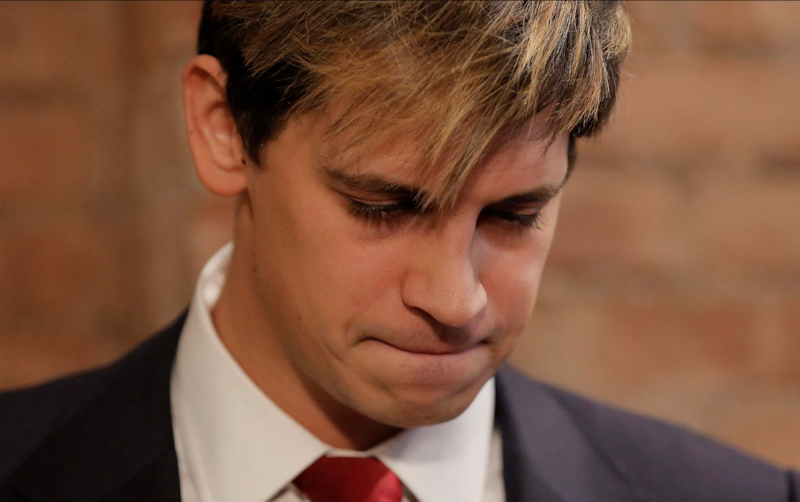 BuzzFeed recently ran a supposedly “explosive” expose on conservative bad boy Milo Yiannopoulos. But the only truly appalling thing in Joseph Bernstein’s long read is the revelation that Milo uses a ghostwriter—a lot.

As for other revelations in the BuzzFeed piece, there’s not a lot there. That Milo contacted neo-Nazis as research for an article on the alt-right shows that he’s a thorough researcher, not a Nazi. The fact that in emails Milo, who is gay, Jewish, and married to a black man, sounded friendly to the American Hitler Youth could be nothing more than a journalist trying to butter up his sources to get good information. It’s something all reporters do. (Although sometimes it doesn’t work out so well.)

Milo is no Nazi. But he’s also not his own writer. This is a real disappointment, considering that he’s been compared to Christopher Hitchens and has cited Lenny Bruce as a major influence. Hitchens and Bruce were social critics who had distinctive voices that run like an electric current through their work. Bruce’s How to Talk Dirty and Influence People is an autobiography where you feel like Bruce is sitting right next to you telling you his story, from his childhood on Long Island to his battles with censors of the 1950s. Hitchens’ writing was biting and witty, even if occasionally too thick and verbose. But the verbosity was a part of Hitchens; it was an aspect of his voice. You bought his books to hear that voice.

As the BuzzFeed piece revealed, Milo’s ghostwriter, Allum Bokhari, was paid $100,000 to write Milo’s book Dangerous. Bokhari also pops up in the rest of the BuzzFeed article, seemingly whenever Yiannapoulos has an article to write. Here Bernstein reports on the negotiating that went on before Breitbart published Milo’s piece on the alt-right: “Also, there was another sensitive issue to be raised: credit. ‘Allum did most of the work on this and wants joint [byline] but I want the glory here,’ Yiannopoulos wrote back to [Breitbart editor Alex] Marlow. I am telling him you said it’s sensitive and want my byline alone on it. Minutes later, Yiannopoulos emailed Bokhari. ‘I was going to have Marlow collude with me… about the byline on the alt right thing because I want to take it solo. Will you hate me too much if I do that? …Truthfully management is very edgy on this one (They love it but it’s racially charged) and they would prefer it.’”

As I’ve argued before, Americans once had a kind of unspoken pact with our bad boys. We let them cause trouble, sleep around, offend the squares and drink and drug too much, but only on the condition they be responsible for some substantive art. Hemingway was a brute, but he wrote The Sun Also Rises. Marlon Brando was an intense eccentric who revolutionized acting. Norman Mailer spent time in jail, but he produced several great books that are unmistakably his work—including the sprawling Advertisements for Myself, a book well summarized by this Amazon reviewer’s line: “an unbelievably arrogant exercise in self-creation.” That’s the key term here: self-creation. It was arrogant, sarcastic, subjective, horny, and it was brilliant, but there was no mistaking Mailer’s voice, anymore than there was that of Hunter S. Thompson.

There’s no finding Milo’s voice in Dangerous, because he didn’t write it. This makes him less a significant iconoclast than a Britney Spears, dancing and lip-syncing while behind-the-scenes songwriters do the hard work. For all of Milo’s strafing of the college snowflakes who can’t take the real world, I’m betting that most of them write their own term papers.

After he was banned from Twitter and his publisher, Simon and Schuster, pulled out of publishing his book, Milo had a chance to independently publish something brave, insightful, and entirely his own. Instead, Dangerous is weak sauce. Joseph Bottom, a conservative, summed it up well in the Washington Free Beacon: “Dangerous is a book mostly in the way that something by Bill O'Reilly or any other media figure is a book: short paragraphs strung together to pander to an audience. It's even sloppily copyedited, and Milo as Fabulous Writer seems never to have met a comma splice he didn't like… None of this means that Yiannopoulos is wrong in general or even in any of the particular points he makes. It just means he didn't write the book he maybe could have written and certainly should have written, chastened into seriousness by his strange expulsion from the gardens of media notice and cast out into the wastelands.”