Now the party of the permanent war dance. 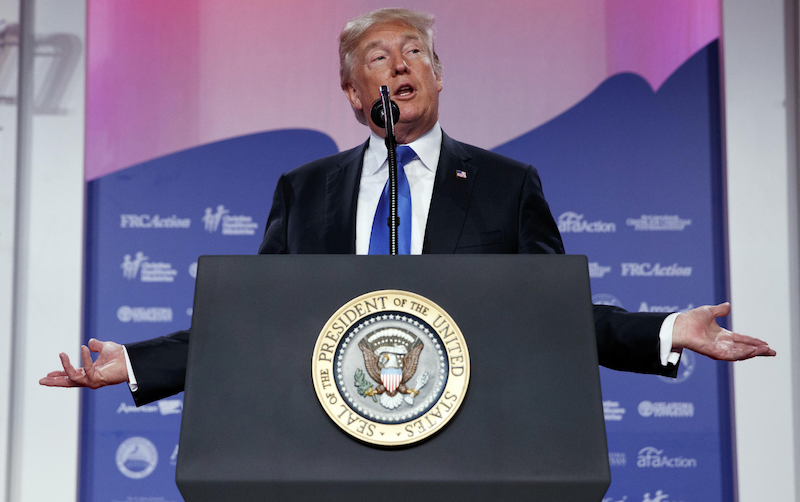 “His tweets do say a lot, and that’s what we try to mirror.” Samantha Osborne is the Republican National Committee’s chief digital officer and she’s talking about the President, whose tweets have been labeled by the chairman of the Senate Foreign Relations Committee as a significant risk factor for nuclear war. The chairman’s a Republican, of course, so his opinion may be seen as coming from the party’s governing wing. If so, party headquarters doesn’t care.

The RNC takes the Trump Twitter blats—examples of government malfunction at the highest level—and plays on the base’s fond memories of them to dig out more money. By following this method and sticking close to Trump, the party’s having its best small-donor year since around Mission Accomplished. Meanwhile, Senate Republicans can’t raise a dime because they fumbled Obamacare repeal. The Republicans raise money off presidential chaos, not off results in government. The GOP appears to have wound up where it was always headed. With Trump and his RNC, the party has devolved into its core function of separating money from suckers. Governing is no longer in its collection of tools.

A pensive John Cornyn, the Republicans’ Senate whip, reflects on the bloody primaries of 2010 and 2012 versus those of today. “It was more ideological, whereas now it’s just more everybody is just angry at everybody,” he says. I’ve got my view on that. When Obama was president, the hotheads could rail at the Maoist in power. Now they just rail. That’s how the hotheads make their money.

The fans want apocalypse, with their side battling the demon hordes. Apocalypse can’t be provided by the party out of power. Therefore, as Steve Bannon told the Values Voters summit, “it’s a season of war against a GOP establishment.” His demands come down to the decapitation of Mitch McConnell and broken kneecaps for senators judged disloyal to Trump. Which could be all of them. “There's a coalition coming together that is going to challenge every Republican incumbent except for Ted Cruz,” Bannon told Sean Hannity. (One hears that Cruz and Bannon have the same big-money sponsors, the Mercer family.) The President let Bannon know how much he liked those thoughts, according to “two people familiar with the call.” The RNC should do a tweet.

Bad medicine. Dig Carl Hulse at The New York Times. He’s reporting on what Republicans say about the bad weather for Senate candidates: “They say the hostile views of both large and small donors are in unusual alignment and that the negative sentiment is crystallized in the fund-raising decline.” Do they? They sound like a court physician from the days before real medicine. To the Times this sound is normal.

I prefer the words of Al Hoffman, a Florida real estate honcho who used to raise money for George W. Bush. “It’s a real mess, no?” Hoffman said to Politico.