The Myth of the Spat-Upon Vet

A look at the psychology of a long-ago tale. 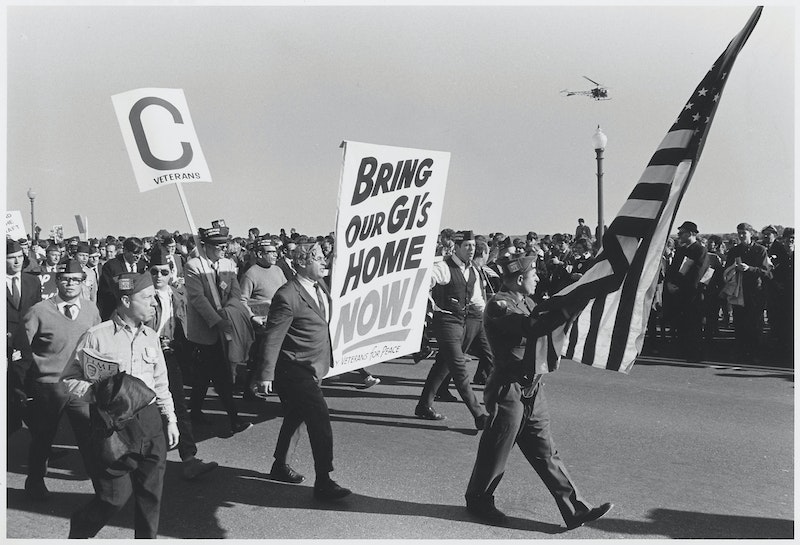 A professor who served in Vietnam (chaplain’s assistant, 41st Artillery Group) dissects the myth that people spat on the veterans returning from that disastrous war. His op-ed piece for The New York Times offers polling evidence that being anti-war didn’t mean disliking the troops, and it reports on his investigations into “about 220 first-person ‘I was spat on’ accounts.” The professor found that available evidence backed none of the stories and threw doubt on many. To take what seems like a giant example, the planes home didn’t land at airports. They landed at military bases, where there were no random civilians to rush up and do anything at all to the soldiers.

Being a professor, the fellow puzzles over obvious things. Why do people accept untrue stories without speaking up? He nails that one. Listeners, he says, “are loath to question the truth of the stories lest aspersion be seemingly cast on the authenticity of the teller.” Here’s another: why spitting? The professor coyly hints at a “Freudian exegesis,” but points us to “the long history of spitting imagery in legends of betrayal.” Then, shaking his head, he admits that this merely delays the question. Where did the people who told these long-ago spitting stories get the idea to include spitting? The professor suggests that years of academic work will be needed.

Well, try this shortcut: they got the idea from living in a world where people spit to show contempt. Nowadays it doesn’t happen so much, because couthness has greatly expanded in reach since 1850 or so. But they did it long ago, and for obvious reasons. Being around people means living next to portable food-processing plants covered in skin. Most of us hold that everything associated with a given plant should stay on the right side of the skin—that is, the inside. In fact, under certain conditions (elevators, airplane seats) we can be desperate for that rule to be upheld. Spitting is the fastest and easiest way of getting the contents of one person’s body onto another person’s body. Also, it involves the mouth, the single orifice that isn’t doomed to be comic. Therefore, spitting goes well with drama, such as the humiliation of a man who has given his all at the front and comes home to ingratitude.

I’ll add a thought. Vietnam vets kept telling the story because to them it felt true. They didn’t get a lot of parades, did they? That war was a dog, and there was no glory for those who fought it. Going on leave, a given soldier had seen people in airport lounges look at his uniform and then shift their eyes someplace else. The cliché from World War II was of civilians rushing to greet the hero come home. Flowers, small flags, and children played a part. The Vietnam vets imagined the anti-cliché: a little girl was spitting on them. In providing backstory to their picture, they decided anti-war protesters had put her up to it. After all, enough anti-war protesters had said nasty things about the troops.

For his part, the professor suggests that the story may be “indicative of betrayal preoccupations at work in our own culture.” Eyebrows flexing, he asks, “Is it the post-Vietnam lost-war narrative that feeds the back-to-the-future sentiments in campaign promises to restore and rebuild America? And are the recent public and political spectacles of nativism and gun-toting masculinity symptoms of a wounded people more than deviant personalities?”

I’ll go with that “wounded people” thesis, but the wounds came after Vietnam. The Gulf War did fine for our psyche, by which point Vietnam had become old news anyway. But then came 9/11, Iraq, Afghanistan, and the ’08 crash. We’re reeling, and the surprise is that we don’t have stories about fellows returning from Kabul and getting spat on. The reason behind the surprise is that this time we did something right. America made a choice: if we’re going to have a futile imperial war that tears at our insides, we can at least display some decorum and basic fairness. Jon Stewart and Jerry Bruckheimer, the war critics and the war fans, all agreed that the troops deserve appreciation and support because they’re people serving their country in the face of danger. The professor doesn’t seem to know about this decision, and that’s too bad. It’s the one sign we’ve learned anything from our stupid wars.