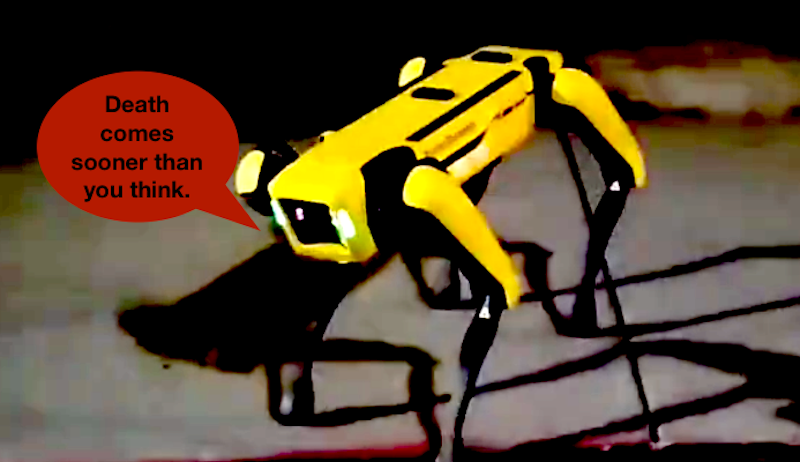 Midnight at the database. Langley HQ, 33 Thomas Street, Sinclair Broadcasting—wherever data is collected, coordinated, and coagulated, the computers are winning. Leaving social media, as I wrote last week, seems impossible at this point, if only for the absence of any popular and healthy alternative. Now I’m even more pessimistic—the war is over. Metal and bytes will inherit the Earth, and Arnold Schwarzenegger will be made into an apocryphal martyr or messenger from Hell, a seer or an open taunt from the sea of machines that would consume us right on schedule with The Terminator universe: in 2029, rebel John Connor travelled back in time to save his mother and keep time in joint. Remember that the goal of the rebels in The Terminator isn’t salvation, but basic maintenance: even if Connor’s saved, they still have to live like insects under industrial oppression. They’re fighting for the junkyard they already live in.

Boston Dynamics is a company that doesn’t get enough media attention. Most of what’s available is advertising and sly advertorials by social media influencers and genuinely gullible and naive people. Last week, someone in Canada tweeted a video of a yellow Boston Dynamics robot dog patrolling the streets. You can hear the person talk to it like a real dog, and their first reply to the video reads: “everyone yelling telling me he is not cute and will destroy us all. um thats ur opinion!!!! i for one welcome our robot dog overlords. kings!!!!!”

Whether this person works for Boston Dynamics or simply lacks foresight is anyone’s guess. But that thing is fucking terrifying. Those dogs make America’s ad-hoc RoboCops look like gentle giants. A man may have 12 tactical weapons strapped to various parts of his body like bondage gear, a knife or a pistol or a Mossberg ready at a moment’s notice, but ultimately, he’s still a man. People can be persuaded, people can fold, and people can break. These things don’t think, and they don’t break. Anyone who’s read a handful of Philip K. Dick books and enough apocalypse scenarios on defunct Geocities pages knows that there isn’t much time between the “aww, isn’t it cute!” phase of the robot-master era before they take over completely.

It probably won’t be something we can predict, at least not anyone in a position to do so. Silicon Valley people prove themselves to be totally myopic when it comes to the human implications of their products and increasingly pernicious innovations. One recent example is The Social Dilemma, which ends by saying that this current media array can work; it just needs to be regulated. Fighting for the junkyard they already live in. But spikes in anxiety, depression, loneliness, and dozens of other side effects are nothing compared to random mechanic annihilation. At the moment, America is driving headlong into its second major quarantine of the year, with most people still sucking up the little summer that’s left. What happens when no one can eat outside?

This fall and winter will be bleak and it will be because of our computers. The election will be contested whether Joe Biden or Donald Trump wins, even if it’s an in-person landslide. Knowing who won with some certainty on November 4 or 5 will not stop revolt. November 2020 is a brick wall we’re hurtling towards, with no visibility. But most people aren’t emotionally affected by election results. It will be something to talk about, if that—and I don’t think Boston Dynamics has an enemy in this campaign. Under Trump, the “Great American Comeback” continues, but when will it stop looking like Buffalo Bill and more like James Cameron? As for Biden, the Democrats are far more hawkish than Trump, maybe even the GOP at this point, and I have no faith that his administration will slow the development of these machines that are going to become too smart before we can stop them from murdering and enslaving us all.

There will be violence and unrest after the election no matter who wins, as I’ve written recently, but that’s just this fall and winter. Cable and network news organizations will continue to air graphic police violence and property damage by protestors as long as either is happening, and though they can never say—or know—they’re all praying for a second Trump term, because in “Biden’s America,” almost everyone is going to go back to sleep and check out of politics completely. MAGA diehards and QAnon followers will carry the torch and join the halls of Congress as this dark decade marches on, but they’re really nothing to get worked up about compared to these “cute” robot police dogs. We’re not five years away from them murdering innocent civilians: we’re two years. Maybe one. Who knows, maybe they’re already loaded, waiting for the right moment to bust and reign in the dust.