The Illusion of American Deterioration 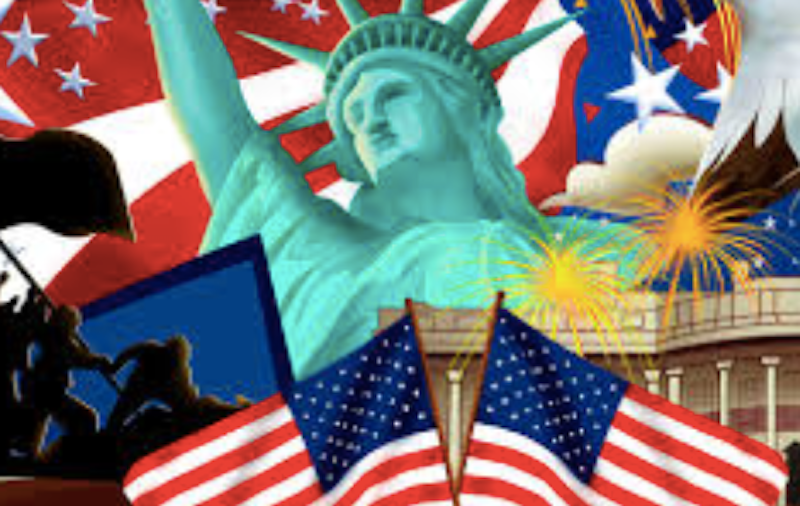 Reading Chris Floyd’s “Thirty-Six Hours Past Judgment Day” reminded me that I can be sympathetic to opinion pieces that are well-written, even if I don’t agree with them. I’m a writer, I can recognize when someone has talent, and sometimes that’s more important to me than what he or she is actually saying. But not always.

Reading Floyd’s Counterpunch op-ed, I saw a hint of my own experience. He mentions his life fell apart so he went to Moscow in his mid-30s looking for a new one. That’s familiar to me. My life has fallen apart several times and, though I’ve never been to Moscow, I’ve found changing countries can be a good way of putting things back together. I also admire Floyd’s attempt to tie the harsh world of “Yeltsin time, in the post-Soviet breakup” to “the openly criminal, openly unconstitutional rule of the cheap gangster Trump.” It’s an ambitious move, since it’s more specific and risky than just calling Trump a dictator or a fascist. But I still don’t buy it.

We’ve seen this many times over the past four years, even recently, when Biden compared him to Joseph Goebbels in an interview with MSNBC’s Stephanie Ruhle. As a trash-talking non-politician media personality, Trump may be reprehensible. He may be a lousy president. He may have disastrously mismanaged the front-end of the COVID response. He’s offensive (at least to my liberal sensibilities). And his use of the executive order and the federal pardon seems on the near side of corrupt. But we don’t see him disappearing journalists out of airplanes, publicly executing his political opponents, and dumping bodies in mass graves—all prerequisites from the beginning of the fascist dictator playbook. Trump’s a lot of unpleasant things and he may openly admire dictators, but he’s not one of them. He’s a crooked capitalist, who often makes a mess.

As much as I like Chris Floyd’s writing, I’m not convinced we’re sliding straight into hell. We’re still far from “Yeltsin time,” government-sponsored gangsterism, and becoming a failed state. Bread lines in the United States aren’t happening—unless you’re socially distancing and you’re at your favorite bakery for some handcrafted sourdough olive loaf. We’re in a pandemic and therefore have to endure lockdowns, but there’s no state-sanctioned reign of terror, no lèse-majesté. I’ve lived in countries where those things are real. I know the difference.

No matter what the inflatable personalities on MSNBC and Fox may suggest, martial law, race wars, and the collapse of the Union aren’t seriously in potential. We’re just a nation of upset Americans, more upset, at least, than we have been in a long time. And Floyd’s piece reflects that, as he adds at the end, “But now, in this moment of time, our moment of time, we must say not what we ought or wish we could say, but what we feel.” But reality isn’t just a mass of feelings. In reality, we’re dealing with a pandemic, civil unrest, unemployment, a toxic media, and the identity politics that have gained prominence. But we’re not dead yet. Let’s tell it like it is: America doesn’t go down so easy.

This charmed, fascinating life we’re leading—no matter skin color, economic circumstances, or opportunities—could end right now and all we’d honestly be able to say would be, “That was remarkable.” It reminds me of Louis C.K.’s famous “Cell Phones and Flying” routine where he observes that everything’s amazing but no one is happy: “We’re the worst people… because we have this beautiful thing and we hate it.” As I said when I first heard the slogan, Make America Great Again: “When did it stop being great?” But Floyd wants to toll the bell:

None of what we are seeing today—the relentless rise of an authoritarian police state; the lawless rule by kleptocrats; the genocidal violence (verbal and physical) aimed at an ever-increasing circle of “enemies” and dehumanized “Others;” the looting of trillions of dollars corruptly transferred from the common people to the super-rich; the endless wars, the state murders, the sanctions and “humanitarian interventions” that condemn millions to death, ruin, famine and despair—none of this had to happen.

True, bad things usually don’t have to happen. And good things don’t have to happen, either; they often don’t, no matter how hard we try to wish the moral utopia du jour into being. And as well-crafted as some op-ed writing can be, crying foul and mourning sudden change overlooks the very real strengths and virtues of American culture, something that has become unfashionable to point out in this new era of speculative history, witch hunts, public excoriation, and iconoclasm.

No country is all bad and no culture is completely bankrupt. Believing that means entering a failure mode where you can’t see clearly. As Hans Rosling notes in Factfulness: Ten Reasons We’re Wrong About the World—and Why Things Are Better Than You Think: “The news constantly alerts us to bad events in the present. The doom-laden feeling that this creates in us is then intensified by our inability to remember the past… This illusion of deterioration creates great stress for some people and makes other people lose hope. For no good reason.”

If you read my old columns and blog posts, you’ll see a fair degree of this sort of hand-wringing. I’m an expert at lamenting my bad luck and the political state of affairs in the United States, far in excess of what Floyd just offered in Counterpunch. My life fell apart as much due to social and economic conditions beyond my control as to my own complaining and maneuvering. Ultimately, I left the States because I simply couldn’t find a decent job and I’d received too much abuse from my keepers in graduate school. But I never stopped thinking that there might be a time when I’d come home again.

At the end of my English PhD, my graduate adviser laid some Great Depression mind-rape on me as only a hardened serial rapist can—casually, methodically, with the unbothered nonchalance of a repeat offender: there’s always room in academia for good people. She said it so smoothly (along with a few other passive-aggressive and demeaning things) that it would be years before I straightened out my thinking and realized what had happened. Of course, as an agent of the system, she knew this.

She took the aggressive, unkind approach usually aimed at the non-aristocrats in academia’s hidden caste structure—an approach designed to make complainers disappear and generally put the victim on trial. Instead of suggesting that I fall back on a (non-existent) trust fund or look to my (non-existent) affluent family for support while I used a post-doc to stall, attend Potemkin conferences, and submit a few more essays until the next annual hiring cycle, she took the more expedient route.

When facing a despondent graduate student about to be cut loose after almost a decade of demanding study, with no job prospects and a certain amount of insurmountable debt, one avoids the litany of half-truths and occasional bald-faced lies used to keep the highly exploitative, extractive system in place. Instead, one starts with a rape-culture cliché: this wouldn’t have happened if you hadn’t wanted/asked for it. One enlarges that into a Great Depression slogan designed to remove all responsibility for the haves and place it squarely on the have-nots: there’s always a job if you want to work. And then one garnishes this dish of poison with some meritocratic moralizing: there’s always room in academia for good people.

It’s a recipe for despair and often suicide in those who have dedicated their lives to a profession they will never practice. It’s handed out most commonly to the losers, the unconnected, unlucky, un-datable grad school proletarians destined for obscure entry-level jobs, temping, and lifelong poverty. Luckily, I could write and liked doing it. I could freelance and survive—doubtless to the chagrin of the graduate adviser, who had nothing but malice for the young writers in the department.

Ten years and 13 countries later, I should’ve learned something in retrospect from that sociopath. I had enough time to figure it all out. But, like many liberally minded humanities students trained for a calling that has largely disappeared, I remained invested in a political and professional system that didn’t care about me (and, I suspect, has never cared a whit about Chris Floyd, either). I hit the end of my freelance decade in a writer’s Stockholm Syndrome, living from gig to gig, practicing an exotic style of longform complaining, and alternately blaming myself and the U.S. education system for all the ramen and the coffin hotels.

But it was nobody’s fault and I still don’t believe we’re entering the End Times. We’re not now, nor have we been, in some kind of endless hellscape. Life is actually amazing. I just had to wake up to that fact. That’s my version of “woke,” a view of life not focused on hatred, resentment, or regret, but on the opportunities and experiences that came my way as soon as I took responsibility for myself—a responsibility grounded in seeing things as clearly as possible, not just through the lens of what I may be feeling as I watch MSNBC.

Recently, I saw the movie, Limitless, and recognized my post-PhD self in Bradley Cooper’s Eddie Morra, only I didn’t have a crazy genius drug to help me into the ranks of pathological success. They say a writer only fails when he quits and I believe that. But I also believe there are other achievements necessary for leading a non-miserable life, like the success of being able to get your teeth cleaned, the success of getting employment commensurate with your level of education so you can pay off your enormous debts, the success of being able to afford luxuries like an apartment that doesn’t make you sick and clean food.

Those things are still possible in America and they’re amazing when put into global perspective. To get them, you might have to travel far, like Floyd and I did, or do something you don’t want to do for a while. But don’t lament that we’re living in a failed fascist police state in 2020 America. We’re not. Don’t spend your life complaining like yesterday’s Eddie Morra. Maybe you feel crappy being locked down or having to socially distance from everyone or having to watch violent protests burn through otherwise great cities, but your feelings are only a small part of what’s happening. Just because it feels like the end doesn’t make it so.

It's trendy to assume that America has always been rotten, systemically, from its root. And media commentary would have us believe that the current, often violent and upsetting, modes of dissent and complaint should morally motivate us to burn the whole thing down—that wanting a humble, middle-class life in our imperfect system is capitalism’s hidden carrot-and-stick coercion at work and now the carrot’s gone. Now people think it’s all stick. But that endless chattering commentary from a manic and childish media doesn’t mean a thing. Maybe it’s all carrot.

Journalists, especially talented ones who should know better like Chris Floyd, write, “This is our only hope: that those whom we will never know will know a better world somehow, somewhere, in a future we can’t even imagine,” overlooking that this is the best world, right now, of all possible worlds and, as part of that, the U.S. is still a pretty great place to be.