Not Voting is a Legitimate Decision

Maybe what we need to improve the system is fewer people voting, and making informed decisions. 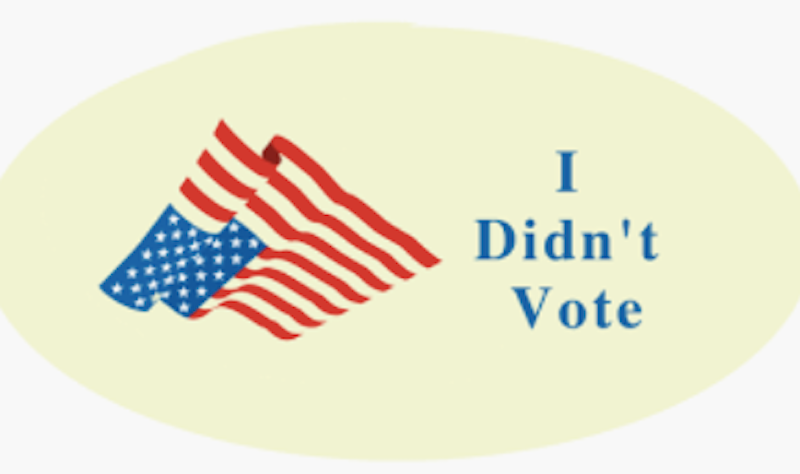 These are some of the ideas put forth by those who want to raise civic engagement. They’re pro-democracy. I plan to vote in the 2020 presidential election but can’t say everyone must. Some people think it’s important to vote, and that we should talk people into voting if they don’t vote. How about no? Maybe what we need to improve the system is fewer people voting, and making informed decisions.

There are Americans who know absolutely nothing about politics. Do we want disengaged people voting? Someone could have below-average intelligence and yet more politically informed than someone with a higher IQ who doesn’t pay much attention. Some of the most misinformed people I met politically were my peers in college. Often, people vote for someone they've never heard of. A Reuters poll in 2018 showed that about a third of Democratic and Republican voters didn't know the name of the congressional candidate in their district a month before the election. Blind party loyalty doesn’t make sense when there’s so much variance on where candidates stand on issues.

Living in Massachusetts, I plan to vote third party in a congressional race and not vote in a state senate race because of the candidates involved; one is a liberal Republican, Patrick O’Connor, who’s supposed accomplishments are pork spending funded in part with the regressive state lottery, and the other is a Democrat, Meg Wheeler who wants Medicare-for-All at the state level, the government to hire fewer white people, and presumably raise taxes so high that businesses will move to New Hampshire. Universal healthcare is a worthwhile endeavor, but even Vermont couldn’t implement single-payer at the state level.

It’s also worth noting that the people who do vote already, who may know more about politics than a lot of people who don’t vote, make some poor decisions. In my state, about 40 percent of Republicans who participated in this year’s U.S. Senate primary voted for a conspiracy theorist named Shiva Ayyadurai, who associates with white nationalists. And two years before that, 36 percent voted for Pastor Scott Lively in the gubernatorial primary over Charlie Baker; Lively has a questionable human rights record and inspired a "Kill the Gays" bill in Uganda. Given the lack of media coverage of those campaigns, I’d assume most people voting for them didn’t know that—which is a problem.

And then there’s the Democratic side where candidates can’t do basic math. They’ll propose Medicare-for-All, a Green New Deal, and maybe universal basic income, and never talk about how it’s paid for. Some people think the deficit doesn’t matter, but that’s not the argument the candidates make. If you’re Sen. Ed Markey, it’s nonsense that Twitter communists will defend until their last breath. For example, he tweeted earlier this month, “Our government has the money to fund Medicare for All and a Green New Deal. It's right there in the Pentagon's budget.” Some people really believe it.

There’s waste in the military budget. Markey should know. He voted for the Iraq War and has taken money from Raytheon. However, something that costs $8 trillion over a decade can’t fund something that potentially costs $5.2 trillion annually and something else that may cost $5.1 trillion to $9.3 trillion annually. It’s a shame because voters deserve serious environmental and healthcare plans, and the GOP doesn’t offer them either. And Joe Kennedy, who ran against Markey unsuccessfully, had nearly the same platform with no plan for paying for these items. The same goes for Alex Morse out in Holyoke, who also wants UBI and reparations. We don’t see legitimate answers from politicians on how to fund programs in a country that spent $4.4 trillion last year, collected $3.5 trillion in revenue, and had a $984 billion deficit.

The candidates purposely mislead the public. Last month I had a conversation with someone involved with a democratic socialist’s campaign in Massachusetts’s Fourth District, Ihssane Leckey. I was told some of the candidate’s private positions were watered-down versions of the public positions—which makes sense because the candidate was a multimillionaire running as a socialist. Most voters probably didn’t know that.

Vote, don’t vote, both are legitimate decisions. However, a low turnout can send a strong message to politicians as well. For example, conservatives stayed home in 2013 when Gabriel “Gang of Nine” Gomez ran against Ed Markey in a U.S. Senate special election in Massachusetts—because they didn't want a liberal hawk. And in 2017, conservatives stayed home in Alabama rather than voting Roy Moore into the U.S. Senate—because they didn't want an accused pedophile in power.