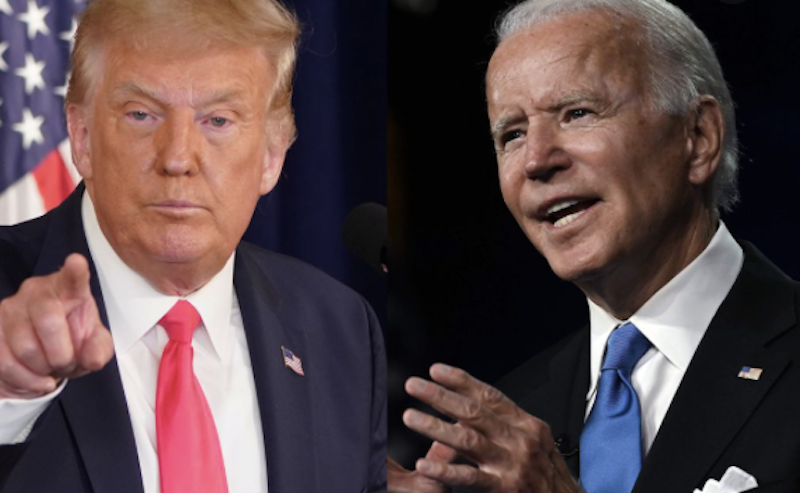 Faced with a choice between rudeness, lies, and tariffs on the right and arson, child endangerment, and national bankruptcy on the left, you’d think America would find some other option, such as Libertarian Party presidential candidate Jo Jorgensen. Realistically, though, the handful of Americans who care enough about politics to trudge to the polls (or mailbox) on Election Day will be focused on angry partisan micro-issues rather than big-picture philosophical differences.

The closest most voters will get to looking at a “big picture” will be mulling the basic psychological traits of the candidates—particularly Trump’s egomania and Biden’s dementia—and how much horror or affinity those traits inspire (not that people gauging politics by personality traits is anything unusual—take this recent piece by someone still steamed that former vice presidential candidate Joe Lieberman’s son gave him a harsh grade in school). Add to the mix the late Ruth Bader Ginsburg’s purported deathbed wish that Trump not appoint her replacement—and give all this an ominous backdrop of COVID—and it’s an election about declining health all around. The two main presidential candidates may not be death-bed decrepit, but they’re still sort of decrepit.

First: Trump, love him or hate him, is going to keep working his angry grandpa shtick to Election Day and beyond. There will be no grand philosophical agenda even in a second term, just more swatting at things that annoy him. For its failure to prevent a recent crime and rioting upsurge, New York City, like Portland and Seattle, has been designated by Trump’s Department of Justice an “anarchist jurisdiction.” This is more a way of saying those places are behaving badly than of saying they have coherent rebellious philosophies.

Would that they did! Instead, New York City will participate in electoral democracy in just over a month like the rest of the nation. Far from promoting anarchism, the city will go on behaving like a totalitarian socialist enclave, disrupted by even-more-socialist rioters.

All the while, leftists in and outside New York will pretend to be freedom lovers guarding humanity against a tyrannical Trump. The strange warnings from the left about the possibility of a “Red Mirage”—that is, the appearance of a Trump victory on election night, which should not be taken too seriously, we’re told—are surely a better indicator that the left is contemplating non-democratic or at least vote-tweaking resolutions to America’s political struggles than that the right is. Be watchful.

The half of the political spectrum that appears willing to, say, route money from left-leaning corporations friendly with Bill Gates and Jack Dorsey to Black Lives Matter-affiliated bail-funding groups and then to less-formal projects like renting a U-Haul full of riot weapons is probably not the half of the political spectrum that wants the election and its aftermath to go “smoothly,” even when they give themselves anodyne names such as the Transition Project.

In a world now full of people who want gun manufacturers and the like to get sued for what their customers do, maybe the bail-funders should be held accountable for the subsequent actions of those they assist, too. This increased blurring of the public/private lines is why populism (of some sort) is making more and more sense: the commanding heights of government, capitalism, and philanthropy alike are held by anti-civilization subversives.

With that in mind, I can’t rule out Trump’s combative egomania continuing to yield some good results, working like an anarchist wrecking ball swung directly at those commanding heights, even if the wrecking ball doesn’t do nuance (or have the grace to admit it already holds the highest office in the land). Trump having his anarchist strategic uses doesn’t excuse his numerous un-libertarian actions, or the often obnoxious psychological traits of those who feel the strongest and most immediate affinity for him.

Regardless, I don’t think many people are falling for the left’s 11th-hour attempt to spin Trump’s hopes for reelection—and his reasonable fear of mail-in and proxy vote fraud—as a dictatorial urge to cling to power, overturn elections, and fight for control of the military. Despite the fevered imaginings of the Transition Project, most people see in Trump a man probably happy to retire into a gig as talk show host or golf tournament host if it comes to that.

Second: Biden’s now selling himself to us, when he’s awake, as in essence “the devil we know.” How big or surprising could the risks be after all these decades, goes the argument? Well, Biden may not be surprising, but anyone claiming to have libertarian leanings should recall that Biden has been awful for decades, not merely predictable.

As people watch forthcoming Supreme Court confirmation hearings, they should recall Biden is himself a veteran of the Senate Judiciary Committee. Libertarians who saw the Clarence Thomas confirmation hearings three decades ago remember Biden asking Thomas how America could be expected to tolerate a Justice who had spoken fondly of libertarian arguments in favor of property rights. Biden’s the enemy and long has been; don’t kid yourself to burnish your respectable-establishment cred.

That establishment still expects Americans to be impressed when, say, an array of Republicans associated with the FBI, CIA, and the anti-Trump group called the Lincoln Project endorse Biden—or when 30 former Romney staffers (which is a hell of a lot of fair-weather Republicans on team Romney, I must say) do so, but inspiring this sort of army-of-dwarves onslaught is surely the biggest point in Trump's favor.

Third: Ron Paul, you know in your heart, is the politician who makes the most sense, with his lifetime of warnings that government has grown too big and too powerful and needs to be put back in its constitutional straitjacket. Thus, many goodhearted people, whether libertarian or not, were alarmed by Paul’s micro-stroke last week, even though he’s not running for anything anymore. He’s still the politician making the most sense, even when he’s impaired. He’s also the least alarming, since he’s the only one who doesn’t want to control you.

Paul had a bit of a rough week even before the stroke, with YouTube censoring his video expressing skepticism about the dominant COVID narrative and the SEC temporarily shutting down a bitcoin operation run by Paul’s former political director. But then, while people look upon Paul’s stroke with alarm, what was that bizarre Pelosi moment last week when she abruptly stopped in mid-interview with George Stephanopoulos to say good morning and announce the day of the week for no reason? At least Paul has the excuse of a stroke—and he’s not running the House of Representatives.

It’s fitting Pelosi now thinks Trump doesn’t deserve a chance to debate Biden. She probably wants to protect her fellow dementia sufferer Biden from abuse by Trump, in much the same way Fox News wants to protect George Soros from anything that might come off as an anti-Semitic attack, so much so they’re willing to cut off Newt Gingrich in the middle of criticizing Soros’ financial influence. All around us, the foolish rush to protect the faltering.

But the immediate choice before Americans, who, unlike me, plan to vote, should really be which candidate most resembles Ron Paul. The Libertarian seems the obvious choice. I will say this for Trump, though: He, far more than Biden, is the heir to the mantle of mildly anti-war politics.

Notice how the establishment, even the parts claiming to be anti-war, trot out purported insults to the troops when they really want to make some public figure look like a heretic. But Trump reportedly saying World War I soldiers were dupes and we were unwise to join the Allies may be the most delightfully anti-war thing any president has ever said—and perfectly in keeping with the sentiments of a whole school of tragic English poets I could’ve sworn we were also supposed to respect only yesterday or so.

Former Trump associate Michael Cohen and others saying Trump would happily start a war to boost his popularity is more a laughable confession of their own likes and dislikes than a convincing analysis of Trump. Say what you will about the grouchy old egomaniac, he doesn’t seem to think war is cool. You can’t convince me he’s itching for conquest one day and then expect me to be horrified the next by him scoffing at militarism or saying DC fights needless wars “to keep arms dealers healthy.” That’s hardcore peacenik talk from the Prez—and thank goodness.

Thirtysomething Ivy Leaguer CNN national security reporter Ryan Browne was aghast at that Trump comment, tweeting, “In an unprecedented public attack by a sitting US president on the leadership of the US military, President Trump has accused US military leaders of seeking to start wars to boost the profits of defense contractors.” Gasp! Maybe Browne’s so young that Eisenhower’s warning about the military-industrial complex has faded into the forgotten recesses of history for him, jumbled up with World War I trench battles and the sack of Rome.

I’d prefer to outlast Rome, and I’m not convinced the Bidens and CNNs of our world know best how to achieve that. I’m not so sure the current establishment will even outlast Ron Paul.