Even if people are unhappy, are they really willing to give up their ability to make “public statements” and affirmations online? 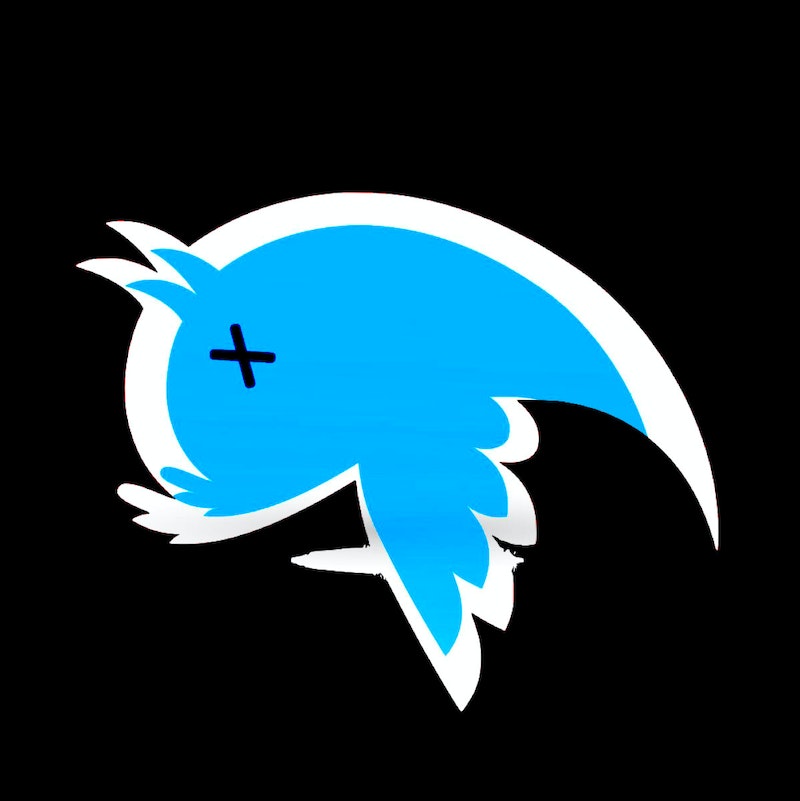 When will Facebook close? When will Instagram see its last selfie? When will the Twitter bird sing its last song? When will social media collapse and where will everyone go? I can’t quite imagine this world without people pacified by smartphones and easy alternate realities that haven’t yet physically entered our bodies. The Apple Watch comes close, so do most cars made after 2015—good luck finding one without a GPS and a computer installed in the head stereo. Deleting one’s account is already too much of a to-do than it should be: I got off Facebook earlier this year after having an account for over a decade, and I’ve already forgotten most of those acquaintances last names, many people altogether.

Twitter, as I’ve written before, is the only current social media platform that allows for any kind of creativity with its form. Facebook is, as Dan Deacon once said, “like going to the mall food court every day to see everyone you’ve ever met.” MySpace was an HTML minefield, full of garish coding that would crash computers and make careers. The last great run of DIY touring in America was 2005-2010, the MySpace era, right before smartphones emerged and opened their all-seeing eyes. Events no longer occurred in the moment, but were titrated over several days, even weeks, until all events felt like cheap premiums, until going to a show felt the same as watching a video on YouTube.

No coincidence that the Arab Spring of early-2011 was, according to mainstream Western media, largely driven by Twitter and text messages. Never mind that those uprisings invariably made their countries worse. Later that year, Occupy Wall Street was even less successful in controlling their media narrative, outfoxed by the cynical and wily Andrew Breitbart and his crew. “YOU ARE ANIMALS!” he yelled at the protestors in Zuccotti Park, less than six months before his sudden death. Breitbart’s legacy was ensured, and his attitude has defined the last decade in American politics, not the phrases David Graeber coined or the close-but-no-cigar presidential campaigns of Bernie Sanders.

I caught Sen. Maggie Hassan (D-NH) on PBS describing the GOP’s blitz politics as “breathtaking” and “hard to believe,” despite having nearly five years of experience with these exact tactics in the exact same circumstance: who expected Mitch McConnell to “keep his word”? Forget about honor and nobility if you actually want to win: Sen. Hassan was shocked that the GOP “isn’t abiding by the rules they created in 2016.” This woman should be removed from office immediately for political incompetence. Astonishingly, Democrats are still shadow-boxing while the GOP reloads its bazookas. They understand “modern day presidential,” they understand digital guerrilla warfare, they’re willing to vent out the vapors and quit pretending they have a motivation other than consolidating power by any means necessary.

Why haven’t Democrats (and some leftists) realized that you can’t hold hypocrisy and morality over a party that’s finished operating under handshake deals and unwritten rules? The worse this year gets for them, the more they burrow deeper into social media and micro-communities and obsessions, domains that they can control (for now). While Donald Trump remakes the Supreme Court for a generation, professors and overpaid journalists bicker about the proper way to address people that speak Spanish.

(Did you know that this now-treasured monolith of “Latinx” people actually identify with their nationality first, rather than their ethnicity? You probably do if you don’t have a baby’s brain—otherwise, The New York Times has you covered.)

There can be no revolution driven by social media. Emina Melonic wrote a review of a new documentary called The Social Dilemma this week for Splice Today. To her mind, “What the tech experts always miss is the notion there’s no algorithm for the human spirit. The antidote to the manipulative effects and shackles of technology isn’t another seemingly pleasant and safe set of technological advances. Undoubtedly, social media platforms need to be regulated, but that’s an issue of public policy. The far more important answer lies in asking perennial human questions. As much as these tech geniuses seem concerned about the state of the world, they repeatedly fail to grasp that human life is composed of paradoxes and nuances, something an algorithm will never be able to track, analyze, and decipher.”

These systems will either collapse after a mass exodus (unlikely), or will grow so large as to represent most of the visible world (look at Amazon and Google). Beyond politics, professionals are tied to organs of personal promotion: if you’re an artist, how are you supposed to make people aware of your work? How will you let people know you’re going on tour or releasing an album if you don’t have a publicity team? How long will “irreverent” politics be accepted? Spotify is already having an internal meltdown over The Joe Rogan Experience, and I wouldn’t be surprised if Rogan has an airtight contract that gives him an out if censorship ever came up.

Despite documentaries like The Social Dilemma (which appears to cover the same ground and make the same points that David Fincher made with The Social Network in 2010), this society couldn’t survive without social media in quarantine. You think the suicide rate is high now? Imagine forced quarantines without ability to communicate publicly. Email will still be around, phone calls and text messages of course, but they won’t be public. Public statements from civilians will once again be limited to letters to Congressional members and yard signs. No Democrat will put themselves in serious harm’s way, no matter how much they cry and moan about the death of a narcissistic 87-year-old woman who should’ve retired when she had the chance—maybe when she was diagnosed with pancreatic cancer in 2009.

These platforms are striker boxes, designed to keep people enraged and engaged. But you know that already. Now what? I’ve been waiting for an answer for five years. We’re approaching a new Year Zero in American popular culture, and I’m not going to be caught flat-footed while statues crumble before me. I’ll be back pasting posters on telephone poles.