Gender Treason and the Supreme Court

People are tying gender identity too closely to political positions. 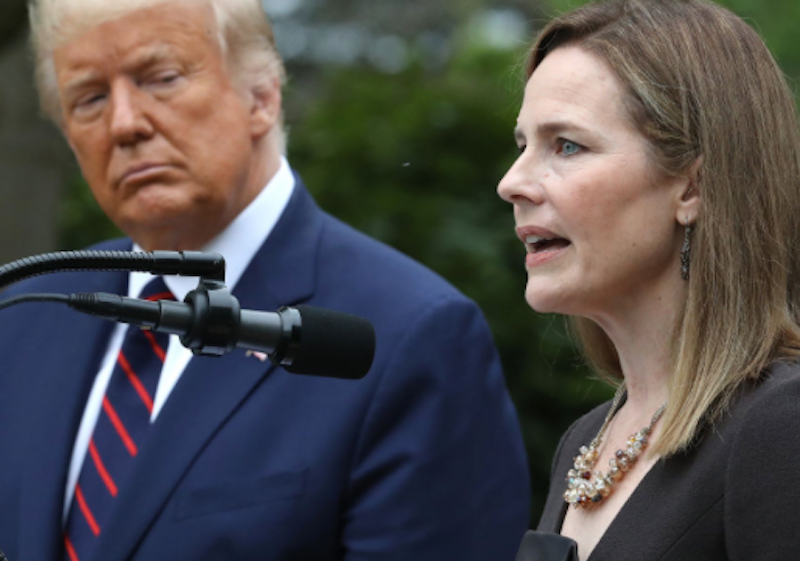 The opposition to Amy Coney Barrett, rocking the opinion pages and the halls of the Senate, is taking some disingenuous and self-contradictory forms.

For example: the charge, implicit in many a negative comparison of Barrett to Ruth Bader Ginsburg, that Barrett is a gender traitor. "President Trump's promise to name a woman to replace Ginsburg... was cynical and insulting to millions of women who view the late Supreme Court justice as a feminist icon," wrote Lara Bazelon in The New York Times. "Women aren't gym socks, purchased in bulk so that a replacement can be seamlessly substituted into the rotation when one goes missing in the washing machine."

It's true: a seamless gym sock is hard to find.

Bazelon then goes on to deal with the rather obvious observation that Joe Biden promised to name "a woman" as his running mate long before he plucked Kamala Harris out of the drier, and that Biden has flatly promised to appoint a black woman to the Supreme Court, declarations which were greeted enthusiastically by all progressives. The idea that people's gender and race are relevant to what position they should hold is central to a progressive vision of racial and gender justice, according to which it is important to have "diverse voices in the room." But Biden's approach is totally different than Trump's, Bazelon claims, because Biden's "not going to gaslight us by choosing someone who will share the judicial philosophy of the Court's conservative wing."

Leaving aside “gaslight,” a word which some "writers" evidently conceive to be a powerful tool to shape public opinion and hence worth throwing randomly into any given sentence (along with "emboldened"), all Bazelon is saying is that she agreed with Ginsburg, and disagrees with Barrett (being entirely certain how Barrett will vote on Obamacare, for instance). She thinks her agreement and disagreement is relevant to the legitimacy of the a priori pledge to choose a woman. For the same people who managed to vividly associate Ginsburg with women's identity in general, Barrett is a gender traitor, or, perhaps, not a woman at all. I'm not sure how else to interpret Bazelon's claim that Trump's declaration that he'd appoint a woman was gaslighting. He did in fact nominate a woman, did he not.

Gender identity is conceived at the moment by progressives to be interconnected with or essentially characterized by political positions; they keep hinting that women who oppose abortion, for example, or have many children, are not really women, a sort of mirror image or fliparound of the charge that Phyllis Schlafly and co. hurled at feminists in the 1970s: I disagree with your positions, and, by the way, deep inside I’m disgusted by your gender deviance. You can see the loathing on my face.

"Certainly if her rough sketch of her home life is accurate," observes Robin Givhan, who writes about fashion and politics for The Washington Post, Barrett "is a lovely neighbor and an attentive mom. But she has not been nominated to the school board." One catches the echo here again of the 1970s battle between “feminists” and “homemakers,” one of the least wholesome moments in the history of gender. Each side accused the other of not speaking for and not speaking as women. We might say that the approach of each side was to "misgender" the other, to disqualify their opponents as women.

Feminists were unnatural, averred their female opponents; they were trying to mess with biological destiny and destroy traditional child-rearing, among other disasters. Anti-feminists, filled with patriarchal false consciousness, betrayed their own gender and themselves, according to the feminists. Evidently, who actually counts as a woman, and what that means, is still a question. Now it's fully flipped around, however, and the home life that once would’ve reassured everyone about Amy Coney Barrett's normative femaleness now raises the suspicion that she has turned against her own people. It's a bizarre reversal, really, and I don't think it's useful. It's like boys torturing each other on the playground for being insufficiently masculine.

Bazelon's defense of Biden's affirmative-action approach to appointments peters out into incomprehensibility. It was fine to produce Kamala Harris like a gym sock, because "Kamala Harris–fairly or not–has been denounced by the Trump campaign as the most liberal member of the Senate." That is, it's alright to reserve a spot for "a woman"—you know, a generic woman, any woman (with plausible qualifications)—if what you mean is a woman who’s sufficiently progressive, or (things get strange in an ideological bubble) who Trump believes or claims to be excessively progressive, even if he's wrong about that.

The SCOTUS process has become a beautiful case study in universal hypocrisy, remarkably disgusting on both sides, insofar as it's not merely a conflagration of nonsensical phrase-making. I'd call on "us" to do better, but in order to do better we'd have to want to. We don't, and on that, if nothing else, both sides, all women and all gym socks, are in agreement.