Casual Trump clues in pal O’Reilly about the U.S. 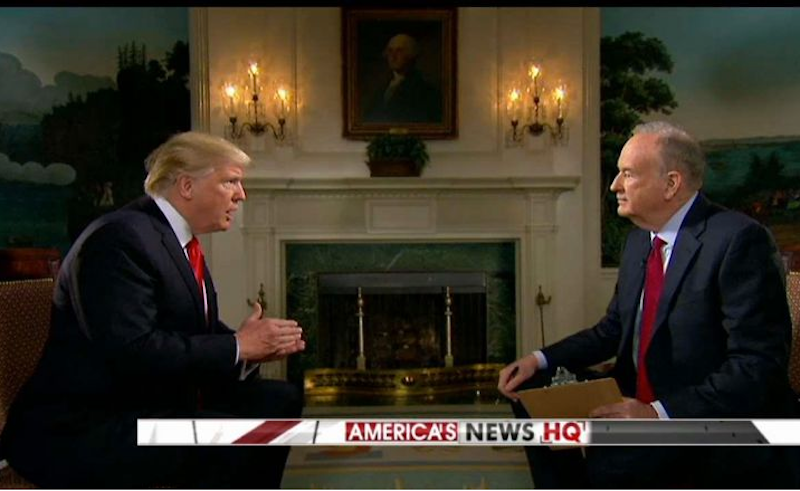 “There are a lot of killers,” the President said. “We’ve got a lot of killers. What do you think— our country’s so innocent?” So we’re in new waters here. We’ve got a president who says this country’s as big as criminal as any other. In a 1970s political thriller, the sort of thing I saw as a boy, the tousle-haired president who came out with that sentiment would’ve been struck down under mysterious circumstances, after which the soundtrack would’ve played a distorted version of “The Star-Spangled Banner.” Today we live the dream and it turns out the renegade president isn’t some reformer that the establishment must remove. Instead he’s the muscle who’s helping the establishment keep a grip on power. The President’s shooting the bull with Bill O’Reilly, his old pal, and he shrugs away the idea that a head of state shouldn’t commit murder. “Putin’s a killer,” O’Reilly says. Trump replies, in effect, “Waddaya waddaya.” Or, to give the long form, the words at the start of this paragraph.

The exchange took place in the new chief executive’s first pre-Super Bowl interview. President Barack Obama, taking part in these interviews, strove heroically for air-time against the assault of O’Reilly’s ever-escalating voice. Trump has a much easier time of it. “A lot of killers around, believe me,” says Trump, wrapping up his thoughts on Putin and the U.S.-as-murderer. “Let’s talk about Mexico,” O’Reilly says. O’Reilly himself has been matter-of-fact about U.S. rough stuff, so he may consider Trump’s remark as a breach of manners, not a besmirching of the country.

Turning to Mexico, Trump fails to deny a particular quote attributed to him. Supposedly he was on the phone with Mexico’s president and said, “You have a bunch of bad hombres down there. You aren't doing enough to stop them. I think your military is scared. Our military isn’t, so I just might send them down to take care of it.” That’s according to an Associated Press article that said somebody who saw the official transcript of the conversation showed that one sentence to an AP reporter. Raising the matter, O’Reilly says, “There’s a report that you talked to President Nieto and you told him—this was the report, I want to know if it’s true or not—that if his army couldn’t handle the drug cartels, that U.S. army soldiers would. Did you say that?” This version’s already more anodyne than the original. In his response, Trump blands the tone. “I did talk to him about it,” he says, and he adds that the Mexican “seemed very willing to get help from us.”

But what exactly Trump said is never discussed. Was it exactly the alleged quote from the official transcript? If so, America’s new boss appears boorish to the point of being unhinged. Or, worse, he’d actually consider invading Mexico. O’Reilly should’ve asked. On the other hand, Trump’s answer couldn’t have been trusted. Here we run into a complication of the Trump era. Normally a politician who steers clear of commenting on some particular wording wants to avoid telling a direct lie. But Trump wouldn’t care. (Of the Mexican president: “We have a very good relationship, as you probably know.”) So, when he and O’Reilly deep-six the “bad hombres” quote, are they committing an artful dodge? Or is there no dodge to commit?