Both are populists and present themselves as a fighter for the common man. 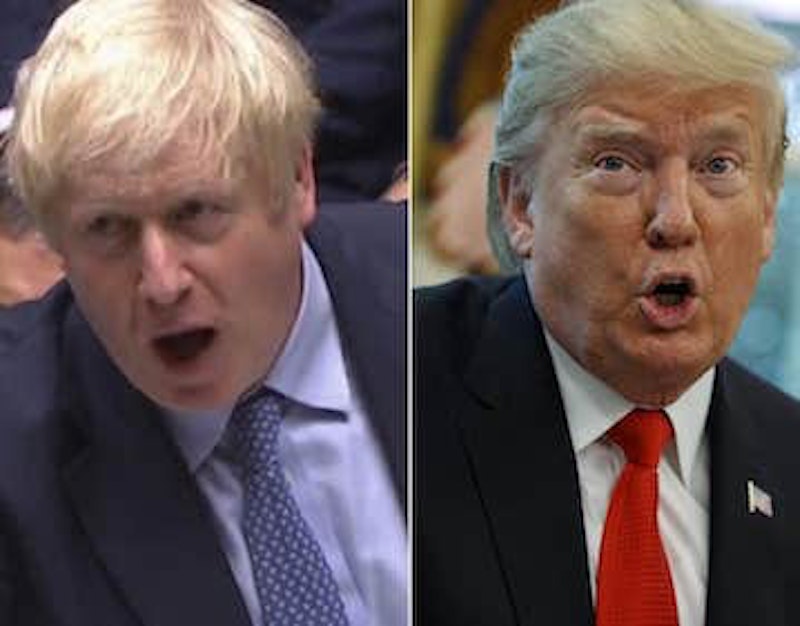 They are similar, if only in incompetence. White men who’ve failed upwards to the highest level of government, Boris Johnson and Donald J. Trump do look alike. But while it’s conventional commentariat wisdom to use them both as symptoms of a rising populist tide, they have their differences.

Watching Johnson in the House of Commons you notice the difference in their situations: the American President doesn’t have to put up with debates as part of his office, doesn’t have to face a hostile opposition in a structured setting. Johnson’s sputtering oratory, different from his campaign affect, points up how both men feed off a friendly audience. They get those audiences in the wild, and make similar promises to them, appealing in broadly similar ways. But there’s a difference in how they relate to their crowds.

Trump sets himself above the crowds at his rallies. He praises himself as a hero, the man who promises (or has, or is) the most, the biggest, the greatest you’ve ever seen. Johnson puts himself forward as more of a common man, even a jesting screw-up. He’s widely known as “Boris;” it’s hard to imagine Trump on a first-name basis with his supporters. Trump insists he’s in absolute control, when he clearly isn’t, and also insists on being taken seriously even at his most bumptious. Johnson plays as a comedian, frenetic and improvisatory, clownish, even vulnerable. Unlike Trump, he’s aware his hair looks a fright, and plays it up.

Consider their backgrounds. Johnson was born in New York to well-off English parents and given the gloriously European name Alexander Boris de Pfeffel Johnson. (While known as “Boris” to the general public, friends and family reportedly call him “Al”.) He studied at Eton and read Classics at Oxford, and went on to a brief career at the Times before getting canned for making up a quote. He became the Daily Telegraph’s Brussels correspondent, and wrote stories mocking European Union bureaucracy, then edited The Spectator. There, he promised his boss Conrad Black he’d resign as editor if he ran for parliament, and then ran without resigning; “Boris lied to me,” Black reflected to The Globe & Mail, “but that’s Boris.” From Parliament he moved on to become Mayor of London, then shifted back to Parliament where he became a leader of the Leave side of the Brexit referendum, and so on ultimately to Prime Minister.

Trump was born to rich parents, went to a military academy, then on to the University of Pennsylvania for a bachelor’s degree in economics. He took over the family business in 1971; it’s been said that he’s the first president who never had a boss. He expanded into other businesses, and bankruptcies followed, but the key point is that he began appearing in tabloids, and vigorously parlayed that into a low-grade fame. He became famous for being famous. His divorces made headlines, he was a repeated guest on the Howard Stern show, and it all reached what appeared to be its apex when he hosted The Apprentice.

Add it up and you find these are two men of privileged, coddled backgrounds, and each of them has conned large numbers of poorer people into voting for him. But there are differences in the images they’ve created, and in the ways they relate to the media that helped them craft those images.

Boris Johnson has, to all appearances, wanted power since he was a young man, if only because power’s there to win. He told a radio host once he was “programmed to try and scrabble my way up this cursus honorum, this ladder of things.” He’s joked about wanting to be “world king.” Power’s what drives him. That’s not something you hear often about Trump. Trump seems to have always felt entitled to power; he apparently believes he has superior genes. His biographer Michael D'Antonio has said his father raised him to believe he was above the law.

And yet if Trump thinks power is his birthright, he craves fame. For decades he’s plastered his name all over anything to hand, and done whatever he can to appear in the papers. He believes all press is good press. He wants respect, perhaps, but above all celebrity status. It’s not surprising somebody who believes he’s entitled to whatever he wants lashes out at “fake news” media that reports on him in insufficiently deferential fashion. He knows, at some level, that for all his power he depends on the media for the fame he craves. That has to be painful for somebody so self-centered.

Johnson, who spent his 20s and much of his 30s in the media, also understands how fame works. He’s seen the press from the inside, and knows how to appeal to it. He’s always wanted people to like him, and somewhere along the line he worked out how to pull that off on a large scale. He knows how to build himself into a character, and how to tell a story around that character to draw exactly the kind of media coverage that reaches people. He knows how to leverage his character, his fame, to gain votes. And thus power.

Trump did the same thing, but not in the same way. Both men are populists and present themselves as a fighter for the common man, as a hero in a story their followers are invited to identify with. But if the stories they tell are similar, the protagonists are different. Johnson’s the awkward amateurish English clown, an admirer of Wodehouse who’s turned himself into a Wodehouse character. Trump’s the American wheeler-dealer; in a quote attributed to Fran Lebowitz, he’s “a stupid man’s idea of a smart person, a poor man’s idea of a rich man, and a weak man’s idea of a strong man.” Trump and Johnson both present fictions of themselves; both are best understood as con men. Though you suspect Johnson’s the only one of the two to know it.

It may come out to the same thing. One of Johnson’s officials when he was mayor of London told his biographer that “Boris is surrounded by people who are seeking to advance their own careers rather than his vision but he doesn’t seem to mind and we’re not clear what his vision is anyway.” Substitute Trump’s name in at the start of the sentence, and it describes much of the current White House.

The irony is that both men have failed by succeeding. Trump will go down in history as a president who opened concentration camps and kowtowed to foreign dictators. Johnson was the first Prime Minister in over 100 years to lose his first vote in Parliament, then went on to lose his next five, by which point he’d also lost his majority in the Commons.