A 1979 Prediction of Newspaper’s Demise

A career in journalism is “a waste of time,” said a young Mark Bowden. 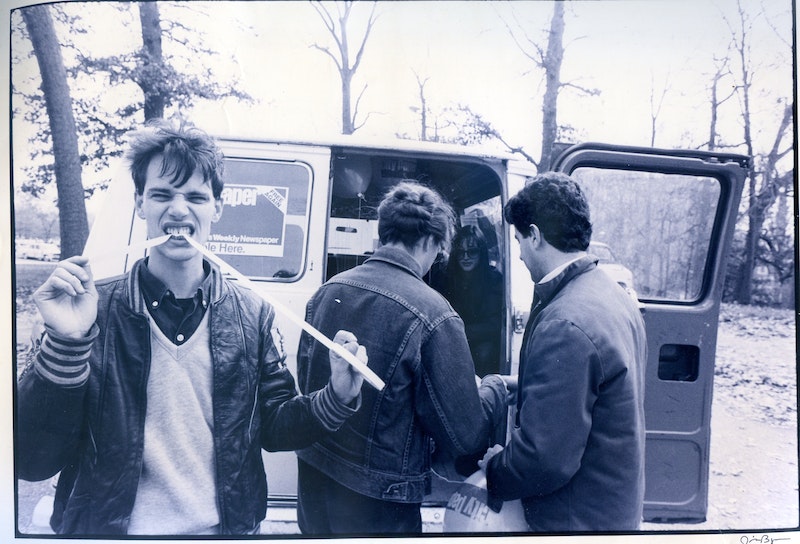 My close friend Michael Gentile (at left in early-1980s pic by Jim Burger) sent me a spare copy of the October 19, 1979 City Paper the other day. Perhaps he saved it because he was mentioned in a gossip column by Peter Koper, a one- or two-off that led to the long-running RUMP section of CP, and was the direct precursor to my MUGGER column in New York Press that ran for over a decade there. Peter, a longtime buddy, onetime croquet competitor—along with the late Joe Potts and Vince Peranio—and Prince of Prince St. in Manhattan, wrote of Michael (amidst a barrage of dot-dot-dot items from “The 2nd Annual Perverted Acts Festival” in Fells Point, bold-typing John Waters, Edie Massey, Pat Moran, Da Moronics and Sue Lowe): “Michael Gentile, the mind behind Dead Strippers, tells me that ‘It’s a nice cab ride down here in the misty rain.’ He’s wearing white Capezio’s, gray sweatshirt, knee-length black leather mac, and blue Levis… none of those snotty imported jeans with foreign sounding labels on the fanny in this crowd… thank God… Good to see people are politically concerned enough to buy American First…”

There are many nuggets in this particular issue, but one bit from Eric Garland’s media column stuck out particularly since it could’ve been written in the past five years. Eric notes that Mark Bowden—who went on to write Black Hawk Down and Killing Pablo, and have a well-earned reputation, and a lucrative career, appearing in countless glossy magazines—was moving the from the now-defunct News-American in Baltimore to the Philadelphia Inquirer, at that time one of the five most prestigious dailies in the United States. Bowden told Garland, before leaving for the Inquirer’s Wayne, PA bureau: “Journalists are second-class writers. Anyone who makes a career out of journalism is just wasting his time.”

As I recall, 40 years ago, I thought this was a rather bitter and cynical view from a nice fellow—an acquaintance—upon receiving a promotion, especially in an era when journalism schools were still flooded with youths who sought the Woodward/Bernstein gold. But Bowden was right, even if he couldn’t possibly anticipate the complete incineration of the media industry. He stayed at The Inquirer until 2003 and then ditched it all for books and magazines. Then again, in 2009, wizened and comfortable, he said, “Nothing will ever replace language as the medium of thought, so nothing will ever replace the well-written, originally-reported story, or the well-reasoned essay.” A memory’s a terrible thing to forget!

Better late than never that a mainstream Beltway pundit—in this case, of all people, The New York Times’ Maureen Dowd—understands how fundamentally Donald Trump has upended traditional politics. A less-exalted, or, in today’s passing parlance, “privileged” observer could’ve seen this three years ago when Trump tossed all rules, dignity and intelligence, and was on his way to the GOP presidential nomination. Dowd, like her friends, at first treated him as a hilarious footnote to that election, unintentionally falling under his spell, and it wasn’t until the spring of 2016 that they sort of took him seriously. And then he defied polls and “conventional wisdom” and squeaked past the robotic (and baggage-impaired) Hillary Clinton.

Now, Dowd, almost alone, says Democrats are in trouble for 2020 if they don’t understand The New Politics. She writes, about last week’s three-hour debate: “Trump is one of the phoniest people ever to walk the earth. Maybe that’s why he was uniquely suited to tear through the phony conventions of and bloated world of consultants that made up politics as usual. There were a lot of good politicians on the stage in Houston. But the night rang hollow as they clung to the old conventions—the overcoached performances, the canned lines, the pandering, the well-worn childhood anecdotes meant to project ‘reliability.’”

Dowd concludes the column by asking a question no Democrat wants to even consider: “Will the most beatable candidate in American history win twice?”

In the me-myself-and-I category that forms a large component of social media today, I read this eye-popping comment on Facebook last Monday. It read: “Damn. RIP Ric Ocasek. Another piece of my youth, gone." Never mind that the Cars’ frontman left behind children and any number of close friends upon his death at 75. It’s all about me! My youth! I’m getting old!

I was surprised by last Sunday’s news about Ocasek—didn’t realize that the “New Wave” artist was 75—but didn’t feel any particular sense of “loss”; how can you when celebrities who’ve been eligible for senior citizen discounts for years drop off every week? I suppose Twitter and Facebook act as a de facto obituary page in place of long-ago print newspapers, a section that would command the attention of people over 50, perhaps taking second-fiddle only to sports results and the comics.

The Cars hit it big in the pop music renaissance of the late-1970s, and there was so much excellent material released almost every week, I can’t say they were a Top 5 favorite band of mine, which is no knock given the quality and quantity of the time. But songs like “Dangerous Type,” “Let’s Go,” “Since You’re Gone,” “Double Life” and “Touch and Go” would be the highlights (for me, at least) on a very good 12-track CD.