They're not "deranged," just cowards. 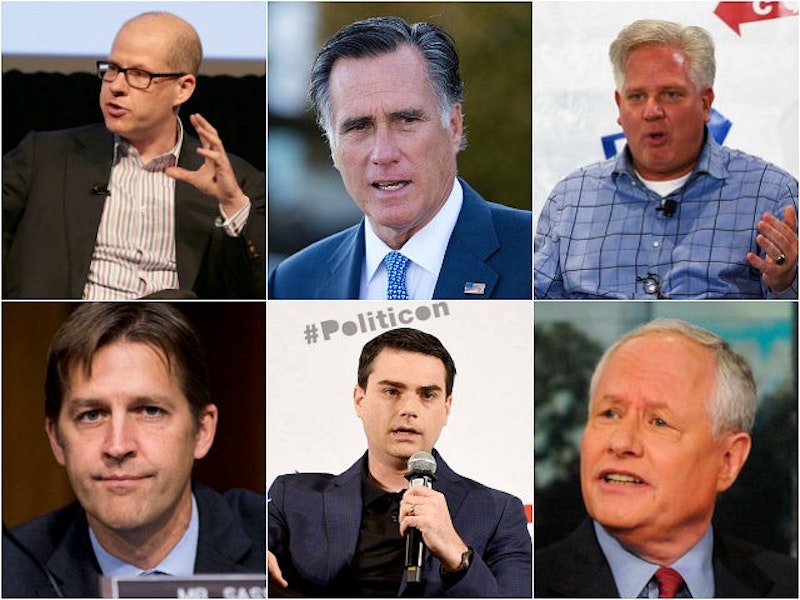 On Sunday, Donald Trump suggested, or instructed, on Twitter that the Department of Justice should intervene in The New York Times' investigation of Supreme Court Justice Brett Kavanaugh's alleged misbehavior in college. There was a time when a U.S. president interfering with the free press so blatantly would've attracted bipartisan condemnation, but Republicans are more obedient now. The President has trained his lapdogs well.

The Democrats have their own problems. Actor Tom Arnold is reported to have said, "I would endorse a fucking Nazi against Trump." New York Times columnist Michelle Goldberg said on "The Argument" podcast that she'd prefer to have a homeless person in the Oval Office than Trump. They both suffer from the modern malady known as Trump Derangement Syndrome (TDR).

TDR gets all the attention, but there's a related malaise with less fanfare attached—Trump Silence Syndrome (TSS)—that involves monastic silence among Republicans whenever Trump behaves in a way that no American president should be allowed to get away with, a routine occurrence now.

Trump Silence Syndrome is mocked and condemned less because it involves an error of omission. Calling out Republicans for saying nothing when Trump claimed there was "blame on both sides" and talked about the "fine people" at the alt-right rally in Charlottesville will never have the impact of that viral video of the woman who screamed in agony as Trump was inaugurated.

But at least that poor woman's pain wasn't a performance, unlike Lindsey Graham's golf-buddy act with Trump after having called him a "kook" who was "unfit for office," and after Trump had trashed his recently departed best buddy, John McCain. The war-loving Senator from South Carolina contracted an integrity-threatening case of Trump Silence Syndrome in the early morning hours of November 9, 2016.

TSS and TDR occur with the same frequency. For every instance of people flipping out over Trump putting ketchup on his well-done steak there's the President doing something like calling a woman a "horse face" and the GOP leadership ignoring it, as if it's acceptable to use the bully pulpit to demean a woman.

Texas Sen. Ted Cruz, who's usually got a 10-gallon mouth, would've been the logical one to go to bat for America's distaff side after that demeaning (inaccurate, too) comment, given that Trump had mocked his wife Heidi's appearance during the last Republican primary. But Lyin' Ted's never gotten his cojones back after that humiliation.

Cruz is emblematic of the entire Republican Party, which has made a bargain to be satisfied with tax breaks and judicial appointments while remaining shy when Trump disgraces the office by doing something like going to Helsinki and siding with the nation's enemy, Vladimir Putin, over his own intel community.

Former Speaker of the House Paul Ryan once was one of a handful of GOP leaders who didn't always bite their tongue when Trump crossed a line. When Trump was the Republican nominee for president and accused the judge overseeing a lawsuit involving Trump University of being biased because he was Hispanic, Ryan called it “the textbook definition of a racist comment." Ryan's now where Republican elected officials go when they choose not to act like they've joined a silent order when Trump spews toxic waste—retirement. Ask former GOP Sens. Jeff Flake and Bob Corker how that works.

There are no Republican leaders left who'll criticize Trump for racist comments. When he told members of The Squad to go back to their countries in June, 11 GOP House members did speak up against the President, but none of them are prominent Republican figures.

Trump's like a mafia boss imposing the traditional omerta code of silence, a trait the despot he claims he "fell in love with," Kim Jong Un, would approve of. In Trump's mind, nothing justifies violating his omerta, even when he trashes the country your family comes from in a dehumanizing way that has racial overtones.

When the media reported last year that Trump had called Haiti one of the "shithole countries," Haitian-American Mia Love, then the only black House Republican, called the remark "racist" and asked the President to apologize. When she lost her November election in Utah to Democrat Ben McAdams, Trump taunted her on Twitter: "Mia Love gave me no love and she lost. Too bad. Sorry about that, Mia." When attacked, Trump sees it as a personal victory when his attacker goes on to lose an election, even if it's to a Democrat. He demands loyalty from others, but is loyal only to himself.

While Trump Derangement Syndrome's an ailment of emotional excess, Trump Silence Syndrome's a matter of cowardice—a failure of character. Which damages the nation more? TDR sufferers have temper tantrums, while the TSS-afflicted act like they're in a coma every time they're called upon to speak up when a moral or constitutional principle's at stake. At least those Democrats who lose perspective over the bullying hustler in the Oval Office are acting like they're alive.