It’s the candidates’ time—to be awful. 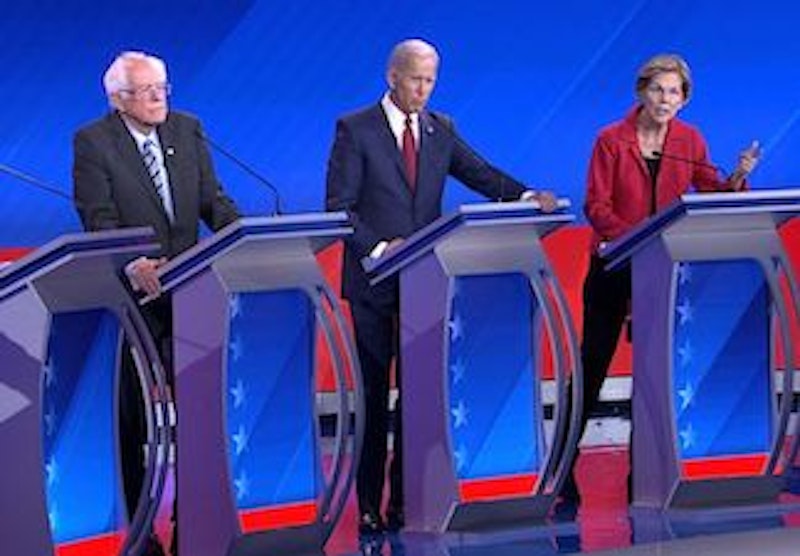 Even the most right-wing of American citizens probably have those moments where they think that a hint of sanity and normality from the Democrats might offer a welcome change of pace after the exhausting past few years and provide a tempting alternative vote next year. So we must survey what the left has to offer, and then be reminded it’s nothing but ever more totalitarian schemes for social control—completely unacceptable, and for a libertarian, unthinkable.

Witness Beto O’Rourke with his yelps of enthusiasm for gun confiscation. Witness, too, his Twitter spat with Texas State Rep. Briscoe Cain—in which O’Rourke accused Cain of making a death threat merely because Cain said he’d defend himself if O’Rourke came to confiscate his guns. O’Rourke’s hysterical-sissy reaction suggests he’s either the most passive-aggressive person alive or can’t even understand the childhood playground concept of “Who started it?”—which I regard as the bedrock principle of all morality. Left-liberals don’t like concepts like guilt and innocence, I suppose, let alone complex notions such as “assailant” and “self-defense.” Never, never again give such people political power.

It’s not just guns, though. Consider O’Rourke’s ill-thought-out insistence you… somehow… have a right to live close to your job. How does he plan to enforce that? No, don’t tell me, please. I don’t want to spend the night shuddering in horror at the thought of the mass relocations.

You might think Joe Biden provides a moderate, albeit doddering, option. But then, in last week’s debate, Biden at one point (in a healthcare segment) basically accused Bernie Sanders of not being socialist enough. Biden should attend to his teeth and leave Americans to attend to their own dental and health plans privately.

Andrew Yang continues his nerd-niche attempt to look cool offering to buy votes and, once elected, to decide whether companies are operating in a “human” as opposed to merely “capitalist” fashion. This distinction is essentially meaningless, but it reveals Yang thinks government makes things “human” whereas buying and selling in the marketplace doesn’t, as if there were no humans doing the buying and selling. Not surprisingly, Yang recently bailed at the last minute on a debate at the libertarian Soho Forum, where he would surely have ended up receiving UBI—an Unambiguous Beatdown Intellectually.

Elizabeth Warren is just as nuts, wanting what sounds like a Yang-ish but even more strictly enforced set of benchmarks for corporations to obey each year if they want the federal government to do them the great favor of allowing them to continue to operate. That way lies socialism, pretty quickly and not in a good way. She also opposes school choice, though no intellectually honest person thinks trapping people in bad schools is the way to get those schools to perform best.

That’s how a kidnapper thinks. The kidnapper swears you’ll eventually learn to like it in the basement, so there’s no reason to let you wriggle out through the back window. Pardon me: that’s how kidnappers and teachers union heads think. Same thing, really.

Meanwhile, a book out this week claims that a DC non-profit head claimed to recall that back at Yale, at one naked college party, friends of Brett Kavanaugh pushed his penis onto a woman’s hand, but the non-profit head recounted that back before Kavanaugh’s Supreme Court confirmation, doesn’t want to comment now, and has not had his story confirmed by the woman who supposedly had the penis shoved onto her (a penis that is also perhaps being victimized in this account). Indeed, her friends say she has no memory of any such incident. That’s good enough for some Democrats, though, and presidential candidates Kamala Harris and Julian Castro have called for Kavanaugh’s impeachment.

I could go on, but you get the idea. The Democrats are so awful and so detached from reality that they have no grounds for complaining about things like the mild hyperbole in that wonderful anti-Alexandria Ocasio-Cortez ad from the New Faces GOP PAC. With historical photos, it depicts the bodies and piles of skulls that tend to result from the communist philosophies with which AOC and others on the left are now openly flirting.

Such a simple, emphatic ad and yet it clearly got under the socialists’ skin, with their allies in media and tech declaring the ad offensive and graphic. It wasn’t all that graphic, but was a rare reminder in an anesthetized republic how high the political stakes really are, which is itself shocking. Good. More of this, please.

Or you can hypocritically condemn such comparisons between democratic socialism (as if the commoners will be calling all the shots) and nightmarish really-existing-socialism, then go right back to likening all non-leftists to Nazis.

We’ve reached the point where even self-proclaimed liberal (but largely libertarian) Nobel Prize winner Friedrich Hayek, deceased for two and a half decades, is condemned as semi-dictatorial by the loathsome French economist Thomas Piketty, who appears to have decided to join the Nancy MacLean school of history, smearing libertarians as radical anti-libertarians to avoid having to grapple with their (potentially appealing) real messages. She tried to make milquetoast libertarian economist James Buchanan out to be a de facto Klansman. Others tried a similar attack on economist Ludwig von Mises afterwards (even though he actually fled Continental Europe to escape the Nazis).

Then they came for Hayek, and there were far fewer libertarians left to defend him than there should be—because so many libertarians were busy trying to find something nice to say about liberals and Democrats instead of defending their own core principles. Give it up. The Democrats know our love of freedom makes us their natural enemy. It’s high time we were as clear-eyed about the situation, hard as it may be to keep one’s eyes open during another Democrat debate.