There's a reason he hasn't offered any details. 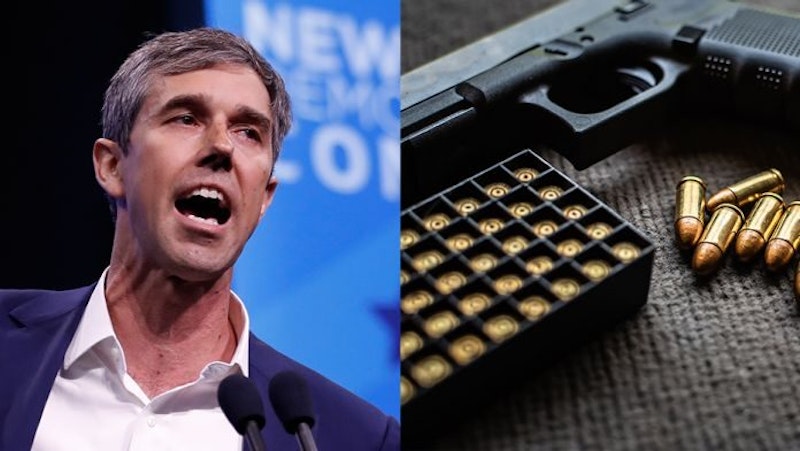 Disarming the next school shooter's a great idea, but Beto O'Rourke's new, blunt-instrument proposal for accomplishing this via confiscation of all "assault weapons" is full of holes he either doesn't want to talk about or hasn't thought through. Beto's not worried about the details. The August 3 El Paso mass shooting has given some direction to the once-promising candidate, and now he's running with it.

The New Beto is bold and decisive. Whereas the old, gentler Beto persona, with its lingering traces of the feckless skateboarder persona, used to speak in dreamy terms about bringing people together via their aspirations, the butch Beto we see now on the campaign trail says fuck this and fuck that and gets right up in the faces of AR-15 owners. "Hell yes, we are going to take away your AR-15," he tells them, like he's Marshall Virgil Earp talking tough to new arrivals in Tombstone, Az. who are reluctant to drop off their guns at his office as soon as they get to town.

Beto's mandatory assault rifle buyback plan's a hastily conceived idea that's 90 percent empty rhetoric, given the minuscule chances that it will ever be enacted in this Second-Amendment-worshipping nation, which as a Texan you'd think he'd get intuitively.

Owners of so-called assault rifles don't like to talk about this, but their guns are different from other firearms. They're not hunting weapons, even if they do hunt with them or use them to deal with coyotes and other varmints. Their bullets are too big for small game, and too small for larger game. These people don't like their AR-15s, which are the nation's most popular rifle, described as "military-style," but they fire high-velocity bullets designed to do maximum damage to organs and flesh, which is what you want on the battlefield, but not in an assault on Walmart. You can purchase a magazine for an AR-15 holding 30 bullets, which nobody'd need for self-defense unless they had to fend off a home invasion by ISIS.

Nobody needs an AR-15, just like nobody needs booze or cigarettes. Americans could exercise their Second Amendment rights without owning AR-15s; they just don't want to. We'd probably be "better off" without any of these weapons, just like we'd probably be better off without other killers like cigarettes and booze. But Americans like their vices, regardless of their dangers, and are loathe to allow the government to take them away.

Beto's in dicey territory with his confrontational talk about taking guns away from armed citizens. He forces us to imagine the inevitable scenario of law enforcement agents visiting a home in rural Texas and ordering a law-abiding citizen with a Gadsden flag decal on his Chevy Silverado to turn over his weapon of choice, under threat of arrest. That could go a number of ways.

How some of these police home visits will inevitably end, however, is just one part of the equation. I'd love to hear Beto's strategy for getting his mandatory gun buyback law through Congress. It's a radical idea, but even the most modest of gun reform proposals die, regardless of the horrors of the mass shooting that's just happened. I suppose that, in 2020, a Democratic president could be elected and there'd be 60 Democrats in the Senate, or that the filibuster rule could be repealed, but don't bet your Barack Obama inaugural commemorative plate on it.

Let's entertain the unlikely scenario that the confiscation law gets passed—how do things then proceed? There's no national gun registry, so there's no way of knowing who owns a proscribed weapon. In a number of states, you can give away or sell a gun with no paperwork. There are also the unserialized weapons known as "ghost guns," which are built without the government's knowledge and available on the black market. Would Beto have us believe that assault rifle owners, even the freaks with the potential to shoot up a school, will operate on the honor system and turn them in for cash? No, many will keep their guns and take their chances with the law.

How does the government find all those weapons that won't be turned in for cash? It can wait for an AR-15 to be used in the commission of a crime and seize it, which would get a handful of guns, or it could try using a list of hunting license owners to carry out door-to-door searches, which puts it up against the Fourth Amendment. This would look like government tyranny to many armed Americans.

So we return to the scenario of the cops knocking on the doors of rural citizens in West Texas and elsewhere across the nation and demanding their guns at gunpoint. This would go badly in a certain percentage of instances, just like it would if the cops were demanding that they turn over all their whiskey or cigarettes. Some Americans who've never had more than a speeding ticket in their lives are going to make themselves into criminals and fight back.

Is it worth it to enact Beto's panicky plan, which puts the lives of police officers at risk for very little payoff? Using the FBI’s definition, 85 people were killed in mass shootings in 2018. The Virginia Tech student who killed 32 people in 2007 did it with handguns, so how many of those 85 lives would have been saved if nobody'd owned an assault rifle?

Beto, rather than offering a real plan to stop mass shootings, is really just sloganeering. It fits his new badass image, but it's merely a distraction from workable solutions that may not have as much dramatic appeal.