Animals Seen as Competition for Victimhood Status By Intersectionalist Vegans

Vegans of color instruct the privileged on the true meaning of veganism. 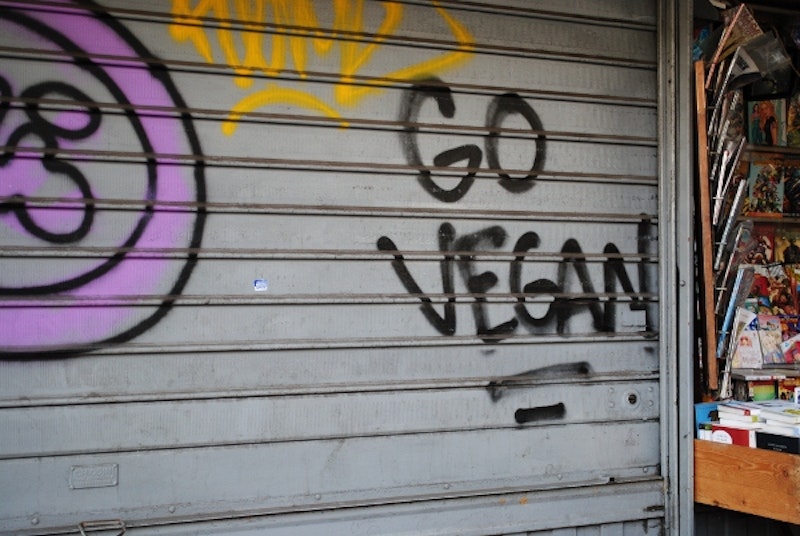 Veganism may, on the surface, appear to be a health-based dietary approach, or one centered on the ethical issues pertaining to human treatment of animals. But when the adherents of intersectionality, who feel they don't have the luxury of a single-issue approach to anything, apply their lens, things get complex quickly. Anti-speciesism is a good start, but intersectionality calls for deeper scrutiny and a search for interconnectedness. The role of issues like colonialism, whiteness, classism, and racism must be parsed in order to understand the phenomenon of consuming no animal products.

The Vegans of Color blog offers a glimpse into veganism as viewed as one small part of the struggle against global oppression of the unprivileged. You can read posts like “Hemp Seeds For Racial Tension Headaches,” and “The ‘Broken’ Black Community Can Be ‘Fixed’ Through Afro-Centric Cissexist Heteronormative Framing Of Plant-Based Dietary Health.” You can also learn about the racial privilege inherent in “voting with your dollars” for a sustainable and ethical food system, and how to think about food in an era of systemic racism and neoliberal capitalism.

Vegans of Color is Dr. Amie “Breeze” Harper’s blog. On it, she contemplates such matters as whether she must be killed by a racist cop on her way to a vegan event in order for “you to finally get it,” without explaining why her destination would be relevant were a cop to do such a thing, who “you” is, or even what you need to get. Dr. Amie, who is black, is enamored with the concept of white privilege, as it's one of the cornerstones of intersectionality. She's found ways that its pernicious influence has a toxic effect on veganism which, depending on your point of view, is either remarkably insightful and progressive, or represents a self-centered, narcissistic stance that divides and weakens the vegan movement.

Amie studied French philosopher Michel Foucault at Dartmouth, did her Master’s thesis on “Cyber-territories of Whiteness: Language, ‘Colorblind’ Utopias, and Sistah Vegan Consciousness,” and wrote a doctoral dissertation at UC Davis entitled, “Vegan Consciousness and the Commodity Chain: On the Neoliberal, Afrocentric, and Decolonial Politics of 'Cruelty-Free.'” She's a vegan of color who’s devoted time to “critical whiteness studies,” and makes a distinction between the whiteness of a Caucasian from Appalachia and that of a Paris Hilton (whose whiteness she calls “proper whiteness”) from Beverly Hills even though both may have the same blue eyes and the exact same skin tone. This intellectual sleight of hand then allows her to be critical of “whiteness,” as if it's an actual ideology instead of a physical trait, while immunizing her from criticism that she's claiming that all whites are automatically more privileged than all blacks.

If you're inclined to accept such dialectical trickery as separating inconvenient parts of a group in order to define that group as you wish, then the tortured logic Amie and other intersectionality proponents employ to make veganism linked inextricably with colonialism and white supremacy is easier to accept. Others may wonder why you're shoehorning issues into areas where they're peripheral, and perhaps suspect you of having ulterior motives such as trying to hijack a movement that transcends issues of personal identity and racial politics.

The intersectionality approach instructs that cruelty-free veganism is not possible in a globalized capitalistic world. It's merely a myth born of privileged myopia, and all of those regular middle-class Whole Foods shoppers purchasing their Tofu Pups and their Vegenaise Mayo are just lost in their privileged, delusional world.

Veganism isn't really about treating animals ethically or humanely. No, it's all about marginalized people and how they're the real victims. If you don't get this, maybe they'll hold another “The Vegan Praxis Of Black Lives Matters” online conference like in 2015, and they'll let you in as a privileged “ally,” so long as you're willing to cop to your overwhelming privilege. You'll learn not to pat yourself on the back as you occupy your lily-white vegan spaces because espousing animal rights doesn't take into account such depredations as xenophobia and systemic racism. A cynic might think that animals are seen as competition in the intersectionality victimhood contest, so their plight must be put into perspective. Such a skeptic might also see intersectionality as narcissism, as evidenced by the seeming need of its adherents to co-opt any movement involving a concept of justice and making it all about themselves.