With liberty and technocratic fixes for all. 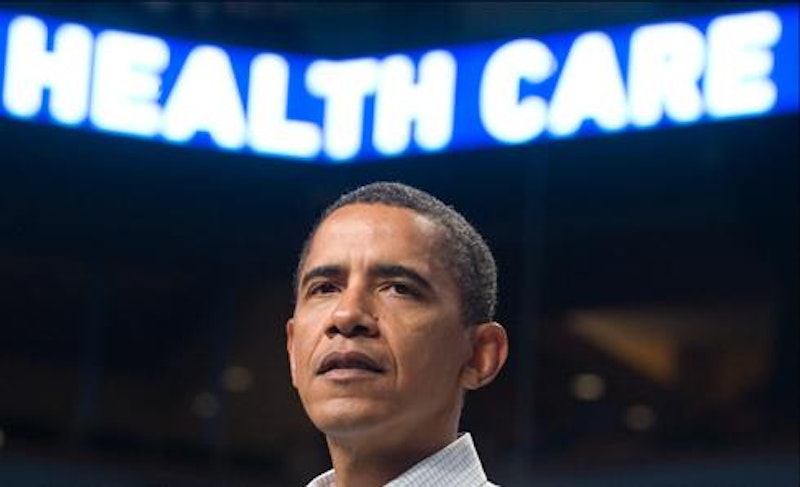 I'm sure everyone's got their own, but here's my story of being jerked around by America's oligarchy of insurance providers. My son was born at home, and our midwife recommended a pediatrician in the area who was willing to see newborns. We trotted off to her, and she was great—very low key, very competent. Best of all, she was at the University of Chicago hospitals, a five minute car-ride from our home in Hyde Park. We fully intended to continue seeing her until my son was a bit older and could go to his own doctor.

But then the inevitable happened. The University of Chicago decided it wasn't going to take our insurance anymore. So instead of going to the convenient five-minute-away doctor we loved, I'm traipsing my child halfway across the city to see a decent doctor, but certainly isn't the one I'd choose if I had my druthers.

Is this a tragedy?  Of course not.  Is it irritating?  Absolutely. Is it a good way to conduct our health care system? No. In general, health care outcomes are better when you stay with the same doctor over time so they can get to know you, and you want to be close to the doctor so you can get to them in an emergency. Randomly forcing people to switch doctors is nobody's idea of what a reasonable health care service should be doing. It's inefficient, expensive, and dumb. It's the sort of thing that makes you wonder why on earth anyone thinks our current health care system is a good idea.

Of course, nobody does actually think our health care system is a good idea—except perhaps for the insurance companies and their paid slaves in Washington. Still, this is in theory a democracy. Our health care system doesn't work. Presumably all the people who use the system realize it doesn't work; they're all being forced to switch doctors and/or not getting the medicine they need and/or being turned down for preexisting conditions just like I am.  So… what the hell? Why are we doing this to ourselves?

Eli Zaretsky's new book Why America Needs a Left offers an interesting explanation. His thesis is that the American left has traditionally been the force pushing for equality—and more than that, the force that has attempted to define progress in terms of equality. Zaretsky points out that the end of slavery could have meant a society based on racial equality, or it could have meant a reorganization of capital in which slavery was abolished but blacks remained second-class citizens. In the event, America chose to go with the second… but the left's struggle for the first eventually blossomed in the Civil Rights movement. Similarly, the Civil Rights movement could have meant a more egalitarian (and not incidentally, more peaceful) society—or it could have meant a meritocratic society in which women and minorities were able to compete in greater numbers alongside men upon the neoliberal field of global capital where everyone receives bonuses for stepping upon the faces of their peers.

Zaretsky argues that President Obama's 2008 campaign promised to take up the banner of the left and equality. The enthusiasm people felt for that campaign wasn't because Americans are idiots and dupes; it was because there's a hunger for a more just society. That hunger for a more just society is a political force to be reckoned with. Obama showed himself able to use it, at least for a time. He got elected, but unfortunately proved himself unworthy of the vision he had evoked. Instead, he reverted to type—a Chicago machine pol, interested mostly in looking competent and throwing bags of largesse at his donors, not necessarily in that order. Thus, his great vision for health care system is to make it more efficient and less expensive, and to make sure the insurance companies are happy.

Obama's plan is an improvement over what we've got, but it's not exactly an exciting improvement. As mentioned above, I'm happy to bitch and moan about my health care, but that's bitching and moaning; it's low-level irritation. Everybody would like the health care system to work better, but you don't get an effective political movement built on a desire to smooth out small scale, or even mid-scale, annoyances. The insurance companies care a lot more about keeping the system the way it is than I care about going across town for a doctor.

If you want change you can believe in, you have to offer change you can believe in. Tinkering around the edges to build a better mousetrap isn't going to do it; nor is cost-curbing. The issue with health care in this country isn't that I can't get exactly the doctor I want. The issue is that there are millions of people who can't get care; millions more who put off going to the doctor because they can't afford it; and millions more who live in fear that they will lose their job and be unable to get treatment for a loved one's preexisting conditions. The issue is that we have a system that says it's okay to let the sick slide away as long as the sick are poor. In short, we have a system that is unequal, unjust, and wrong.

Obama was never willing to make that case, though. Instead, we are supposed to believe that we should focus on balancing our budget rather than caring for our neighbors; on propitiating current stakeholders rather than on helping those in need. Obama presented himself as a technocrat, not a leader, and then he seemed surprised when his grand scheme gets snagged on technocratic details like church funding for birth control or the commerce clause.

Of course, just framing health care as an issue of equality wouldn't necessarily mean that you could pass health care. Maybe what Obama got was the best deal possible from Congress. But as Zaretsky says, how you present these things matters, and what ideals you're pursuing matter as well. There is a not unimaginable world where universal government health care was seen as a way to help people who lost their jobs in the recession, or where the Occupy movement was centered specifically on health care for all, rather than on a nebulous dislike of Wall Street. That's not the world we've got though, in part because the President we have wasn't interested in leading us there. So I'm still dragging my son cross-town to the doctor, and a lot of my fellow citizens are still getting sick and dying needlessly, to no small degree because our leaders insist on pretending that you can fix the first without ever thinking about the second.