Marco Rubio Gets His Boost 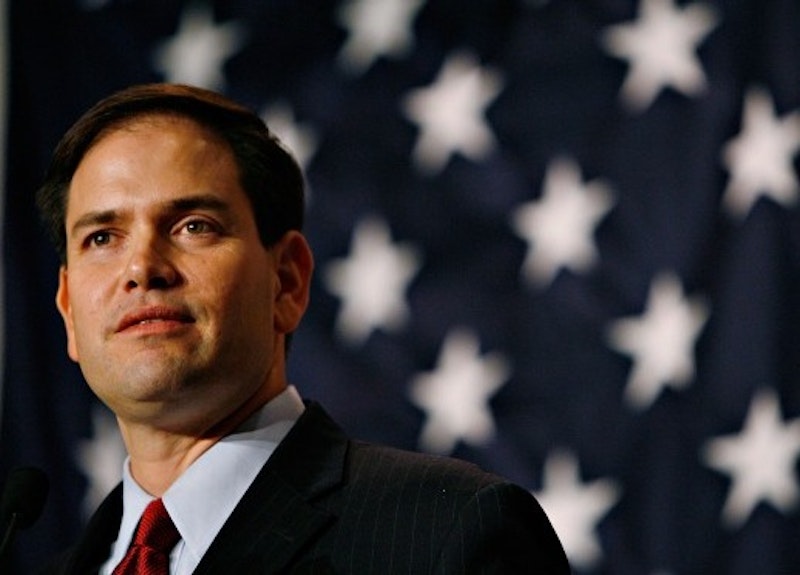 Marco Rubio is getting the alley-oop he was supposed to get in December. The establishment is rallying at last. “Marco Rubio Is Now Winning the Race for Endorsements,” says 538. Fox News has been plugging him, notably with a post-debate focus group that marveled over the Senator’s performance. Maybe the powers-that-be decided Trump was vulnerable after placing second in Iowa. He’s looking more vulnerable now. “New Globe Poll Shows Rubio Closing In on Trump in N.H.,” says The Boston Globe.

Ted Cruz might’ve been looking this hot, or hot enough to keep Rubio from burning so bright. But Cruz had a mishap coming out of Iowa. Having won there, he also triggered a fierce public pout by Ben Carson, who was unhappy that the Cruz campaign had dropped election-day hints that Carson was leaving the race. Of course, Carson will be leaving the race soon. Nobody but Carson still thinks he can be president, and even he is more interested in his campaign’s money-making potential. But Republican voters, especially the fundamentalist Christians, prize the doctor as a pet rock of holiness. The pet rock now has a grievance with Cruz, a candidate who relies on votes from holiness fans.

I sympathize with Cruz. Carson is running a vanity campaign; he’s clutter on the runway. Cruz is awful, but he’s a competent politician with a plan to get to the White House. He charges along and there’s Carson, history’s banana peel, waiting for his feet.

Reince and Rand. I think GOP presidential candidates see themselves as customers at a badly-run restaurant. For example, Rand Paul got ticked off with Reince Priebus. He really didn’t like Priebus’ attitude. He thought Priebus was treating something as funny and it wasn’t funny and this bothered Paul, and okay, he let Priebus know. Priebus is the chairman of the Republican National Committee, meaning he’s what the party has for a head right now, and the something was that security people had wanted to see Paul’s identification. The security people had no idea who Paul was. Apparently this was before one of the debates.

After the senator finally got past them, he told Priebus all about it, and it may be that Priebus laughed. From Politico: “He thought Paul was joking. Paul informed him that, as a matter of fact, he wasn’t joking at all—and Paul told the chairman he wasn’t happy about the way he was responding to his complaint.” Note that Reince Priebus looks like a human pencil stub and, as befits the head of the RNC in this bumpy year, just wants to stay out of trouble. Even so, Paul got sore. Priebus had to send staff to talk with Paul’s staff, “assuring them that Priebus didn’t mean to offend by not taking his concerns seriously.” That’s how things are done when a senator needs relaxing of the poodle curls.

The joke is that, in complaining, Paul reminds people of his failure. If random personnel don’t know him, it’s because he flopped as a candidate. But he marches up to the RNC head and throws a willy. The customer exists on a different plane than the normal individual. Donald Trump doesn’t realize he’s weak when he stays away from a debate. “You gotta stand up for yourself,” he says. That’s how they talk on a busy Saturday night at the Olive Garden. Out in the parking lot, they replay the showdown with the swamped hostess. Look, dear, there are things we don’t have to take, okay?

No doubt that was Rand Paul’s theme with Reince Priebus. He voiced it not long after Priebus laughed. Then Priebus reflected on leaders and on customers.

Franz von Papen’s responsible conservatism. People say Donald Trump is like Hitler, and it’s kind of true. Trump isn’t as scary as Hitler, but he works the same side of the street: the thug vote. The Trump-Hitler match-up comes with another. We have the Republican establishment, Weimar Germany had the Nationalists, the party of aristocrats, generals and big business. These people thought they would boss Hitler. Instead Hitler bossed them, and Trump means to do that too.

But here’s the establishment doof whom Hitler swept aside. Chancellor Franz von Papen thought the past couple of centuries were a mistake and had to be undone. For example (I quote The Coming of the Third Reich by Richard J. Evans), “He abolished the use of that classic symbol of the French Revolution, the guillotine, for executions in parts of Prussia where it had been introduced in the nineteenth century, and replaced it with the traditional Prussian instrument of the hand-held axe.” His program was to reintroduce the headsman.

The Chancellor provides a lesson for the Trump era. Yes, there is now somebody to the right of the right, and this person is dangerous. But that doesn’t mean that the right, the regular right, has stopped being crazy.