Don't Write Off Rubio Yet 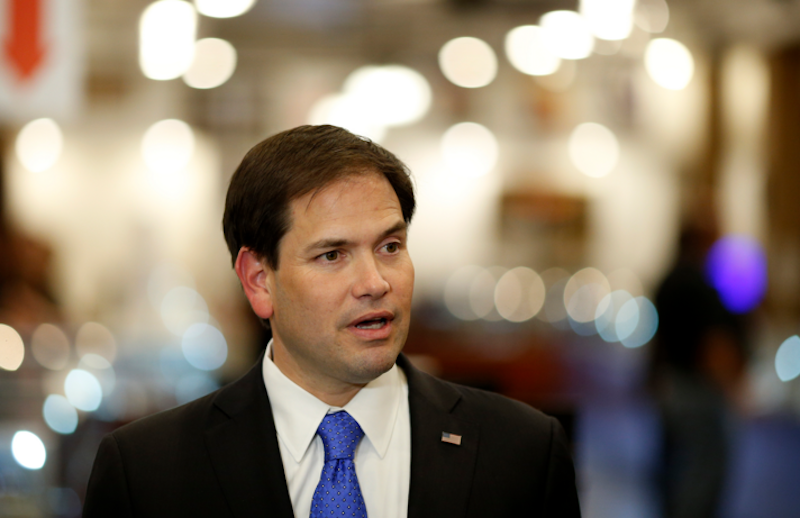 If Marco Rubio wins the New Hampshire primary it could effectively end the Republican nomination contest.

The current conventional wisdom is that Rubio's disastrous Saturday night debate performance wounded him badly. But that could actually help him. If he gets a solid second despite lowered expectations, he'll look resilient. And if he wins, he'll start to look unbeatable. After months of hysterical pundits speculating eagerly about the Trumpification of America and the death of the Republican Party as we know it, a nomination wrapped up in early February would be a serious anti-climax.

But it's a definite possibility. Rubio surged in post-Iowa polls; he's solidly ahead of Ted Cruz, Jeb Bush, and John Kasich in most polls since the caucuses. Gravis showed him picking up a full 10 points from mid-January, going from nine percent to 19 percent, and drawing within 10 points of Donald Trump. If, as in Iowa, Trump's polling strength turns out to be a mirage, Rubio could win the state, just as Cruz took Iowa. Five Thirty-Eight's polls plus forecast, which did better than its polls only forecast in Iowa, gives Rubio a 15 percent shot at winning—a bit down from a high of 19 percent a day or so ago, but not out of the question.

If Rubio were to beat the odds and win, he'd be in a commanding position. He'd clearly be the front-runner, and the uptick of endorsements that led him to finally pass Jeb Bush in 538's endorsement tracker would become a lot more than a bump. He’d receive even more cash than post-Iowa. Though Rubio's a very conservative politician, he's been running center-right compared to Cruz—and with his victory, most of the other acceptable center-right establishment-approved candidates would be pressured to drop out. Assuming Cruz took third place, Bush, Kasich, and Chris Christie would be floundering along in fifth or worse, with single digits. At least two, and quite possibly all of them, would almost surely drop out. They'd probably endorse Rubio.

Cruz and Trump would stay in the race at least for another few weeks. A New Hampshire win wouldn't ensure Rubio of victory in every state—but it would mean that his support base would go from the low-20s into the mid-30s at least. In a three-way race with Trump and Cruz, that would be tough to beat over the long haul—especially since a Rubio victory would mean that Trump's polling numbers are inflated.

It might not happen that way. Trump could hold on to his New Hampshire lead, or Cruz could surge late, or, unlikely as it seems, Kasich could find his feet again (he's at around eight percent in the current 538 poll plus tracker, pulling ahead of Cruz). New Hampshire's volatile. But it's significant that Rubio is the only one whose victory could conceivably end the race at this point—and really the only one who doesn't need a victory to end it. If he finishes a strong second, say with 25 points to Trump's 27, Bush, Kasich, and Christie will be marginalized, as the establishment party vote consolidates.

If Rubio does do well, and the Republican race ends up being much like Republican races past, what will be the significance of all the early Trumping? Claims that the electorate was especially angry, or hungry for an outsider, or that the U.S. was on the verge of authoritarian rule, certainly will seem exaggerated. They'll look even hollower if the more moderate Kasich or Bush or Christie manages to come from behind over the campaign and take Rubio out.

If Trump loses in the end, even if (as seems likely) he wins NH, his candidacy will be exposed as a particularly bloated example of a right-wing carnival. Conservative media has long blurred the line between entertainment and politics, and as a result, the presidential race has become a venue for unserious shills, from Ben Carson to Newt Gingrich, to sell themselves and their books to a credulous national audience. They don't have the wherewithal or perhaps even the desire—to get elected. But they do make the political conversation dumber, not least because, in Trump's case the media covered him with such excessive, disproportionate fervor. If Rubio waltzes to victory with relatively little drama, maybe we can all be a little more skeptical of the reality television stars the next time round.