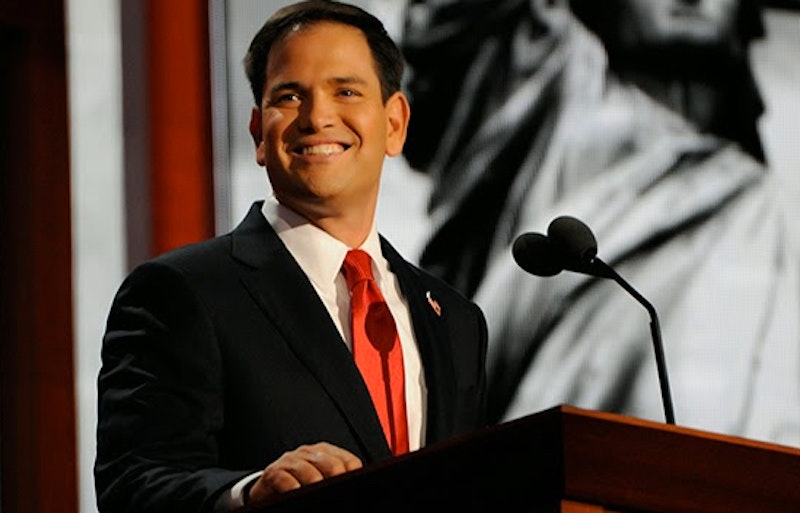 It’s fitting so many in the conservative establishment—particularly its warmongers—placed their faith in a hollow, robotic shell of a politician who bumbled his way through his last pre-New Hampshire presidential debate. After all, it’s that establishment that’s most devoted to building actual war robots, which one day soon enough will probably destroy everything, not just the electoral prospects of the Republican Party. Rubio’s ineptitude is just a foretaste of our end at the hands of purportedly responsible experts.

The three governors—Kasich, Christie, Bush—probably came out of Saturday’s debate least-damaged. They were already the ones with whom New Hampshire is probably most temperamentally aligned (polls notwithstanding), so they may do fairly well tomorrow, whereas the three big Iowa winners—Trump, Cruz, Rubio—may all have a tougher than expected day.

The downside for all of us is that this partial reversal of candidate-performance tiers (with Carson wandering off to the side somewhere) will only serve to protract the primary process. The longer it goes on, the more likely Trump wins in the end by plurality. Then he will bring back “things worse than waterboarding,” as he promised Saturday—outdone in his violent impulses only by the robotic Rubio, the only politician I’ve ever heard talk about the importance of expanding the prison at Gitmo rather than debate whether to shut it down.

(At least Cruz sounded hesitant to endorse the drug war, opting instead for what I think was a deliberate time-killing strategy when he told that long anecdote about his half-sister’s addiction.)

There’s a whiff of fascism in the air. I think even leftists like Matt Yglesias are enjoying it on some level, which may explain things like the recent tweet in which he joked about the Nazis having some good ideas. Everyone online—and even in presidential debates—engages in so much irony and hyperbole these days I’m rapidly losing my ability to tell how serious and thus how dangerous political commentators are. That may be just what they’re hoping for. They’re keeping us confused while looking for an angle of attack. I know I’m confused, anyway.

Is Trump our best defense against Latin American violence—or is he, ironically, a Latin American “strongman” type himself, our own Hugo Chavez rising? Is New Hampshire about to hand him his first primary victory because they like politically-moderate mavericks or because the state’s over 90 percent white and still kind of racist?

When Bell Curve author Charles Murray said at a talk last week that he’s concerned the political results may prove “ugly” when people learn the full details of emerging science on ethnic differences in IQ and temperament, is he really worried? Or is he salivating? Does it help that a Latino won a presidential caucus for the first time last week, or does it somehow not count because it was Ted Cruz? I can’t tell anymore.

For my part, always hoping to steer clear of things as irrational as ethnic conflict, I occasionally notice factoids like non-white Democrats being more likely to favor tax cuts than white Democrats are—whereas Sanders just announced he’ll raise taxes not only on the rich but on the middle class. See, there ought to be the seeds there of a government-shrinking coalition that veers away from ethnic conflict.

I’m somehow not as optimistic as I used to be that the politically-active people want to avoid conflict, though. Ethnic differences are subtle, but the desire of political people to get into fights is unmistakable. It now looks a bit less likely that Latino conservative Marco Rubio will be the man to square these circles, much as I like squares.