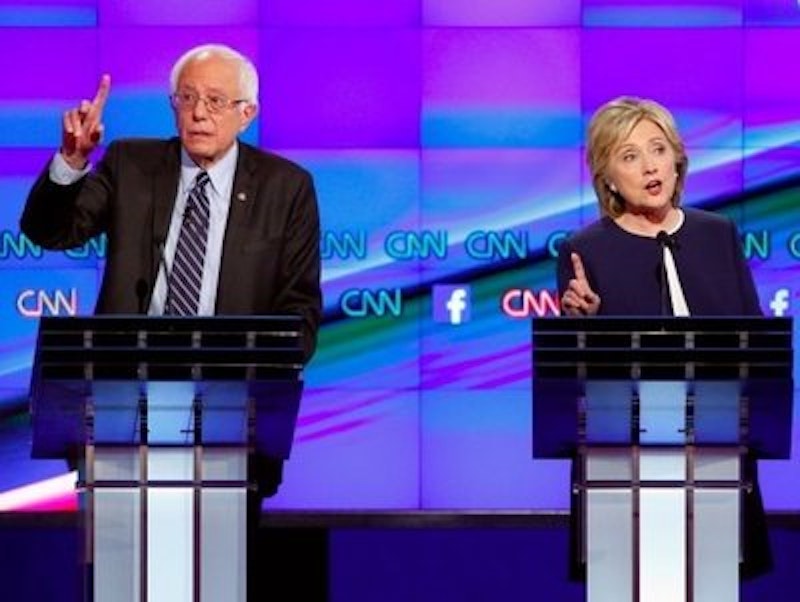 Mort Sahl, the comedian, observed that anyone who maintains a consistent political philosophy will eventually be tried for treason. Neither Democrat has to worry about facing a firing squad.

So let’s not forget, as Democrats consider their newly narrowed choices, that Hillary Clinton was once a pom-pom girl for Barry Goldwater, campaigned for Richard M. Nixon and was president of Wellesley College’s Young Republicans Club. Upset over the Vietnam War, Clinton defected in the early 1970s to become a Democrat and work for George McGovern. Yet the re-born anti-war Democrat’s inner hawk re-surfaced and she voted for the war in Iraq as a U.S. senator and wanted, as secretary of state, to bomb Syria into rubble.

Sen. Bernie Sanders, by contrast, is and always has been one and the same, undeniably—in his own words—a socialist Democrat. But there is also an idiosyncratic aberration. Sanders is identified on the U.S. Senate roster as an independent but Sanders caucuses with the Democrats. And he’s on the presidential ballot, repatriated as a Democrat.

Such is the elasticity of politics that Clinton is now locked as much in intramural debate, as in an election, over definitions and the degrees of separation over policy issues. It should be noted that Clinton is a lawyer and this is what lawyers do. But the debate this time swirls not around war and peace but over what defines a “progressive” and whether baby-step politics is preferable to an all-out damn-the-torpedoes approach.

If this signifies the level of debate in this election, civility has overtaken the Democratic Party, usually known for its rough-neck politics. Clinton’s opponent, Sanders, has even rendered the hitherto unmentionable word, socialist, as acceptable in American politics, especially among young people. Socialism no longer denotes communism and the Cold War. In Sanders lexicon, the word means a Scandinavian-style expansion of government programs to benefit and include everyone.

This was the theme that dominated the recent debate. Such a distinction over identity politics is unusual for Democrats. Ordinarily it’s Republicans who argue over who’s the most extreme. But it’s rare for two Democrats to fight over space at the margin, in this case who’s the most liberal.

Yet Clinton is hung up on the idea that incrementalism is an effective political strategy for accomplishing big things and achieving broad goals. But Sanders is the candidate of the big, bold approach, which is the main reason his pied-piper campaign has caught on with idealistic young people, much in the same way as the heroes of Clinton’s youthful years. (In toss-up Iowa, for example, Sanders won 84 percent of the 18-29-year-old vote while Clinton collected only 14 percent. And the latest polls show the same generational spread in New Hampshire, where Sanders even leads among women voters.)

Progressive, it should be noted, has become a euphemism for liberal. It came into fashion during the duck-and-cover early years of President Barack Obama when Democrats were terrified of being identified with the party’s left flank. Progressive became the polite opposite of tea party. But progressive, or progressivism, dates back to the early 1900s and Theodore Roosevelt’s Bull Moose Party.

To frame the Democratic primary in Sanders’ words, this election is about evolution vs. revolution or, in the summary phrase of a Sanders spokesman—“radical, revolutionary change.” And the evidence of history seems to be leaning in Sanders’s direction so far as the big-picture approach to governance has achieved proportionate results.

Franklin Delano Roosevelt’s New Deal surely was no soft-sell resolution to the Great Depression. It was a time of bold, brash experimentalism that reinvented government and introduced a new economic system and a new social order to America. It created programs such as Social Security, unemployment insurance, workmen’s compensation and banking laws that until recently (the Bill Clinton repeal) kept the nation solvent and secure. Many of those programs originated with Rep. David Lewis, a Republican-turned-Democrat from Western Maryland, who identified himself as a progressive. Roosevelt delivered the America we live by today.

One of the most revolutionary decisions ever made in America was Harry S. Truman’s choice to drop the atomic bomb on Hiroshima. As morally questionable and destructive as it was, the bomb changed the way nations engage each other in war and peace and how they negotiate at the diplomatic table. Dropping the bomb ended a war that might have gone on and taken even more lives. It was no small, incremental decision.

Dwight D. Eisenhower campaigned in 1952 to bring peace to Korea. He delivered the uneasy truce, to this day, by slicing Korea into two nations at the 38th parallel. But he lacked the interest and the will to silence Sen. Joseph McCarthy (R) at the height of his alcohol-soaked witch-hunt until it was too late. This illustrates the bold juxtaposed with cautious politics.

John F. Kennedy surely soared beyond mere words when he inspired the nation to march with him to the “New Frontier” which to him and his generation was not only here on earth but into space as well. And it was no small, incremental gesture when Kennedy forced Nikita Khrushchev to withdraw Russian missiles from Cuba and summon his ships back to Moscow.

Lyndon Baines Johnson, the master manipulator, loved to think big. He built on Kennedy’s New Frontier by conceiving the “Great Society.” Johnson gave America Medicare, the enduring program that’s at the heart of the debate between Clinton and Sanders which Sanders wants to expand to Medicare-for-all or a single-payer, universal health care system. And Johnson, among the most significant of his monumental achievements, delivered the Civil Rights Act of 1964 and the Voting Rights Act of 1965 which together transformed America’s politics. Truly these were not baby-step programs.

And Richard M. Nixon, scoundrel that he was, is regarded by many historians as America’s last certified liberal president. Nixon funded and even expanded Johnson’s Great Society programs. And thoroughly big-picture and revolutionary in its time was Nixon’s federal revenue sharing program with the states. And lest we forget in all of the trashing of Nixon, he ended the war in Vietnam and he opened the door to China.

And if Clinton need be reminded, her husband, Bill, despite the priapic misadventures and other distractions, chalked up some bold accomplishments during his eight years as president. He’s credited with one of the largest economic expansions in history with record employment and wage gains as well as the largest government surplus ever. (To be fair, many economists believe the financial collapse of 2008 began with the Clinton Administration’s deregulation of the financial industry.) He presided over a period of significant nuclear disarmament. Clinton created family medical leave. But as much as any accomplishment, he took on the NRA and fought for sweeping gun control reform which we know as the Brady Bill.

It was Theodore Roosevelt, a Republican, who first proposed universal health care in his state of the union message in 1907. He repeated the call in the 1912 Progressive Party (Bull Moose Party) platform when he proposed “the union of all existing agencies of the federal government dealing with public health into a single national health service…”

Nearly every president since has fancied a system of universal health care. The closest we’ve come is the Affordable Care Act, or Obamacare, that was adopted under the patronage of Obama. And even then, Obama said: “I would have preferred Medicare for all but I couldn’t get it through Congress.” Exactly the bold step Sanders is advocating. (House Republicans have voted 54 times to repeal Obamacare and Speaker Paul Ryan (R-WI) has promised that it will be repealed when a Republican is elected president.)

So whether to reach for the sky or to settle for what is achievable on the lower shelves is the debate that separates Clinton and Sanders and is likely to continue for a much longer primary season than was originally expected until the inevitability aura around Clinton evaporated in Iowa. The recent debate achieved the intended purpose of amplifying the distinction and clarifying the choice.