Clinton’s from an era before Sanders. 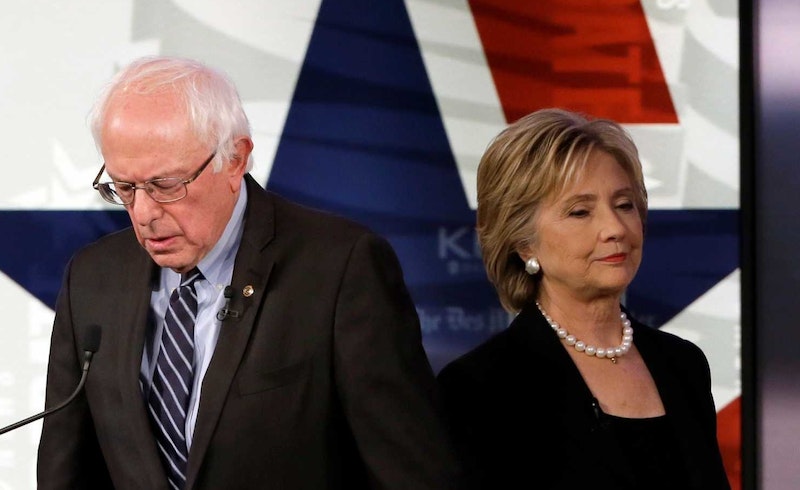 The day before Bernie Sanders and Hillary Clinton’s big New Hampshire debate, Sanders kept hitting the theme that Clinton doesn’t sound very “progressive.” She wants that mantle on some days and the “moderate” mantle on others, depending on which audience she’s trying to reach. Sanders, to his credit, just keeps doing his thing, man.

Consider the big tweet Sanders sent out the day before the debate listing left-wing complaints about Clinton, which is lengthy but worth repeating: “[Clinton p]leads guilty to being moderate and center. Has a Wall Street-funded super PAC. Promoted fracking. Opposes Medicare-for-all and says a single-payer system will never ever happen. Blamed homebuyers for the financial crisis created by Wall Street. Opposes reinstating Glass-Steagall. Hasn‘t ruled out raising the Social Security retirement age. Hasn’t ruled out cuts to Social Security. Supported the invasion of Iraq. Supports a no fly zone in Syria. Architect of the forced regime change in Libya. Supported NAFTA. Supported [trade pacts and the PATRIOT ACT]. Opposes tuition-free higher education at public colleges and universities. Championed the 1996 welfare reform. Supports the death penalty. Called to deport children fleeing from violence in Central America from the U.S. Supported the Defense of Marriage Act. Supported Don’t Ask, Don’t Tell. Supported ‘three strikes and you’re out’ sentencing. Voted for a 2006 bill to create a 700-mile fence along the Mexican border.”

All in all, Sanders inadvertently makes a powerful case for Clinton being a moderate who will probably appeal across party lines and prevail in the general election. But there’s also an important sense in which Clinton is more authentically Progressive.

A century ago, when the term “Progressive” first took on a specific political meaning, it very much implied corporate ties, ties to central banking, a zeal for global warfare, schoolmarmish aversion to drugs and alcohol, a love of major industries, a trust in technocrats and experts, and wariness about immigration—with sympathy for abortion thrown in, in large part because so many of the Progressives were advocates of eugenics. The overall thinking at Progressive organs such as The New Republic was that it was better gradually to consolidate power at the center via cooperation between government and big corporations than to risk revolution by handing all power to socialists.

Now we live in the half-socialist, half-corporate mess those early Progressives desired, and it turns out to be the perfect breeding ground for political double-talkers, bribe-takers, triangulators, and have-it-both-ways public/private cronies like the Clintons. You can’t blame well-meaning ideologues of all stripes wanting to escape the morass somehow. I’d suggest (as I did in yesterday’s column) completely ditching the governmental half of the mess.

But Sanders and many others now use the “progressive” label to sum up all the frustrations felt by the activists who thought the original Progressive compact was a road to socialism and now can’t believe we aren’t getting there faster. We weren’t meant to, and I doubt we’d be happier if we did—but I know the system we do have is a formula for ever-greater frustration, since no idealists of any stripe can win. I’m not sure where that frustration ultimately leads, but this election cycle’s nuttiness is part of that 100-year Progressive plan reaching its self-contradictory climax.