Trump Didn’t Want to Be a Sore Loser 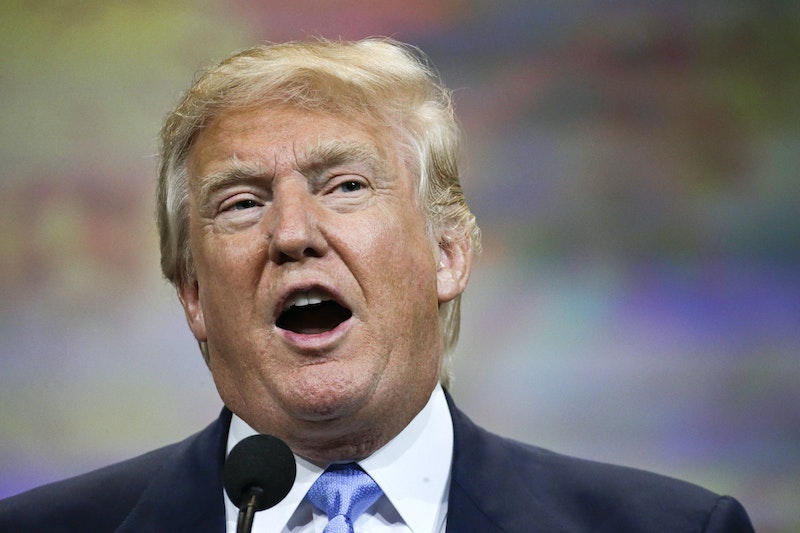 Donald Trump’s Iowa campaign spent $1.2 million on hats and just $560,000 on data. Somewhere in Iowa there may be a few thousand Trump fans who are quite happy with their headgear and still don’t know they were supposed to vote. Ted Cruz spent $3.6 million or more on data. His people tracked down Cruz voters and did it so well that the team knew ahead of time it was going to win. Trump and his hats lost, and naturally now he’s crying voter fraud. They have to do the Iowa vote all over again, or maybe just disqualify Cruz and bump the other candidates up a notch, and yes he’s going to sue.

The surprise is that it took the Big Anus two days to start saying no fair. Monday night, with all eyes watching his concession speech, he didn’t let a word of complaint pass his lips. He briefly congratulated “Ted” and then stuck to his main theme of, hey, Iowa you’re great. The next day, a little late in the morning by his standards, the tweets started up. His tone stayed positive, but there was a worm in the apple. First the Anus tweeted about his “great” experience in Iowa and how he’d shown the “experts” by placing second when (allegedly) they said he would get nowhere. His next tweet stayed on the “Great honor” theme, but now he was mongering excuses: “Because I was told I could not do well in Iowa, I spent very little there.” Notice that now the experts are people who talked to him, not voices on the television. He’s gone from dismissing pundits to reproaching advisers.

Next one: “The media has not covered my long-shot great victory in Iowa fairly.” Now he’s outright on the attack and claiming unfairness. But everybody hates the media, so he’s chosen a safe target. There’s another tweet about “unfair treatment by the media,” and then he hits dangerous territory: “I don’t believe I have been given any credit by the voters for self-funding my campaign, the only one.” In 36 minutes he’s gone from his great Iowa experience to getting heavy with the voters.

There follow some tweets and retweets dwelling on the marvelous nature of his non-victory and on the great things ahead. Trump has lulled himself; his defenses are down. Suddenly he lunges: “Anybody who watched all of Ted Cruz’s far too long, rambling, overly flamboyant speech last nite would say that was his Howard Dean moment!” Trump is attacking the one target he wanted to stay away from, the man who beat him. He would rather sniffle at the voters than go after Cruz. The reason is that Trump knows what he’s bound to say once the name of his enemy passes his Twitter thumbs. He’s going to be the ultimate sore loser and say the other guy cheated.

On Wednesday morning, at 8:44 a.m., the fateful tweet arrives: “Ted Cruz didn’t win Iowa, he illegally stole it. That is why all of the polls are so wrong any [sic] he got more votes than anticipated. Bad!” Seven minutes later Trump has deleted the tweet and reissued it, this time with the typo fixed and no sign of “illegally.” From this point on Trump labors one theme, that Cruz committed “voter fraud” without buying, destroying or miscounting any votes.

If he could, Trump would say the election was a sham. That’s what he itches to do, that’s the impulse he finally gave in to at 8:44 a.m. But making the claim would require evidence of criminal activity and apparently there’s none. So, while still crying voter fraud, he falls back on complaining about Cruz’s scuzzy but legal tactics. Cruz’s campaign told voters Ben Carson was quitting the race when he wasn’t, and it sent out a sly mailer designed to make unwary folks believe they’d be crosswise with the authorities unless they voted Cruz. Low tactics, but no worse than the lies told in a typical speech by Trump or the senator. On this ground Trump must make his stand.

I don’t think he wanted to be there. After ragging on Fox News and Megyn Kelly and skipping last week’s debate, he found out he finished second in Iowa instead of first. That may not be cause and effect, but I bet he thinks it is. Monday night and on Tuesday he struggled to be a different Trump. But he had to tweet, just like he has to whenever he sees Megyn Kelly’s insolent face on his TV screen. Now he’s the sore loser he didn’t want to be. Whether that will do him in, I don’t know. But if he can’t handle Twitter, please don’t give him nukes.