Why isn't the GOP establishment rallying around? 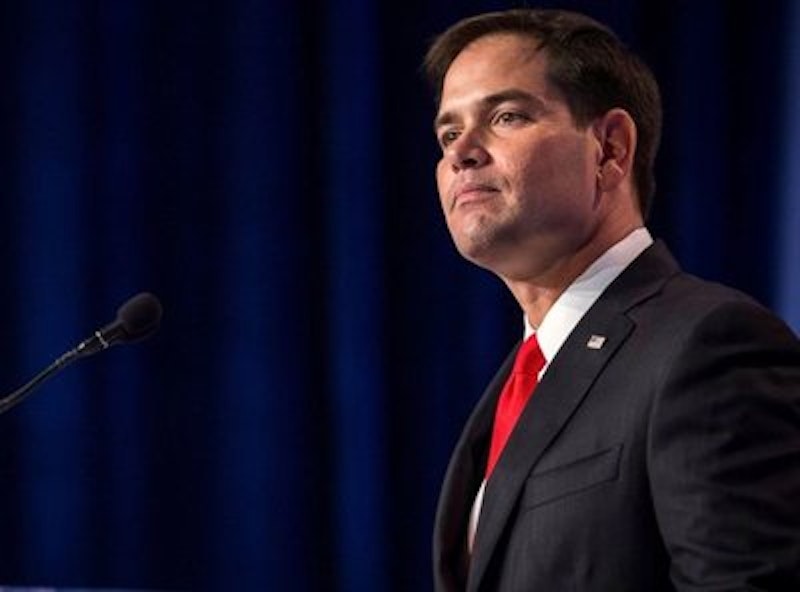 Most pundits and commenters have figured out that Marco Rubio is the most logical Republican nominee at this point. Donald Trump and Ben Carson will never get establishment Republican support; they have no experience and are both horrible general election candidates. Scott Walker dropped out. Jeb Bush is staggering from gaffe to gaffe while his donors prepare to abandon ship. Who's left? Kasich? Jindal? Come on.

There's only one problem. As Ross Douthat points out, despite being the logical selection, Rubio has lagged in endorsements and money—two ways that the party establishment traditionally signals its enthusiasm. Good debate performances have got him favorable press, but not solid frontrunner status.

So why is Rubio having trouble consolidating support? Douthat isn't certain, and I don't know either. But there is one obvious possibility. Maybe donors are leery of Rubio because he isn't white.

In 2008, Barack Obama's race was a major consideration in the Democratic primary. The Democratic establishment was concerned that he couldn't win white votes—which is why his victory in overwhelmingly white Iowa was so important. Even after that, Clinton attempted to argue that Obama's weakness with whites would hurt him (comments she'd no doubt like to forget at this point.)

Political scientists think that white voters did hurt Obama in 2008 and 2012. The popular narrative is that black turnout was such that Obama's race was a net positive. But in their book, The Gamble political scientists John Sides and Lynn Vavreck found that in 2008, and even in 2012, unfavorable attitudes towards black people overall depressed Obama's vote share.

Sides and Vavreck are careful to argue that this doesn’t necessarily mean a white candidate would’ve beaten Romney by more in 2012, since another candidate would have other strengths and weaknesses. Still, if you were a Republican Party muckety-muck, it would be hard to read that data and not start thinking. There's been a lot of chatter about how Rubio will, or could, help with Hispanic voters—but what about with non-Hispanic voters?

Despite recent poll slips, the GOP is still giving a wide berth to Trump, driven in large part by nativist panic over Latino immigration. Trump frothed that immigrants bring drugs and crime and concluded "They're rapists." The Republican base, apparently, adores racist screeds demonizing Hispanics. Are they going to come out in force for a man named "Marco Rubio"?

My own guess is that they will. At this point, I think Rubio will win the Republican nomination. After he does so, he'll have a very good chance of becoming the first Hispanic president of the United States.

But it's not crazy to think that being Hispanic could lose Rubio votes, just as being black cost Obama. The media sometimes talks about minority identities as if they're an unfettered political positive. Obviously, there are advantages to being a "first" in terms of excitement, media coverage, and appeals to particular demographics.

But none of that should lead us to forget that the United States has been, and remains, quite racist—and for that matter, sexist. There's a reason we've had a couple of hundred years of white male presidents. White guys get advantages. The electorate rewards them. They have connections and resources, so, like Jeb Bush, they are inundated with money until they prove that they're completely incompetent.

Again, there could be other reasons that the Republican establishment has been slow to rally to Rubio. Maybe it's just hard for the party to give up its long, baffling, but seemingly unbreakable romance with the Bushes. But either way, it's worth remembering that the way things generally work in America is that people of color have to work twice as hard to get half as much recognition. That certainly seems to apply to Marco Rubio, as he continues to slog towards the nomination.