Get Rid of the Journalists

Let someone else moderate the debates. 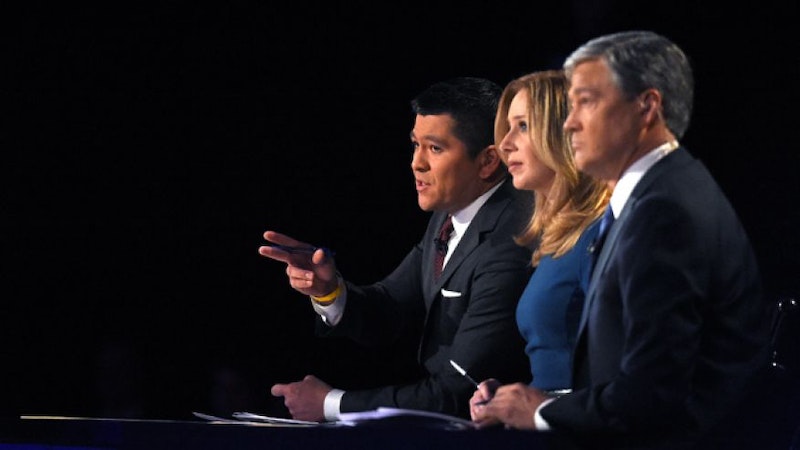 Another GOP debate, another round of complaints from the left and right about the moderators. CNBC was criticized for failing to control the debate, and for a revolving round of stunt questioners and gotcha questions. At one point moderator Becky Quick had to admit that she didn't know Donald Trump's position on high-skill immigrants, even though she was supposedly grilling him on just that. Outlets from lefty Think Progress to conservative News Busters were united in their verdict: the moderators sucked.

Which raises the question: why did we get these moderators, anyway? And, more generally, why do journalists moderate all these debates?

Yes it's true: debates are news, and journalists report on the news. Reporters often interview politicians. TV journalists are accustomed to being on TV. And when CNBC runs a debate, it's easy to staff it with its own regular personalities.

But there's also a strong case against journalists moderating debates. A debate is supposed to be a chance to hear politicians introduce their policies to voters. It's a way to examine the breadth of their knowledge and their command of important issues. They can draw contrasts with each other; they can even criticize each other's plans or proposals. But, for the most part, they're not there to scream at each other or deliver some sort of catastrophic knockout blow demonstrating that (say) Trump is a vacuous blowhard. If such knockout blows were possible, a competent media would have delivered them already, because that is the media's job.

The candidates aren’t going to announce devastating new revelations about their opponents. They're there to tell voters, and party interest groups, in an official public manner, where they stand, and whether they can minimally remember their own policy proscriptions. In part, they're even there to reveal which policies they won't talk about.

Debates are not intrinsically interesting or riveting. They should, ideally, provide information. They don't need to generate news beyond that.

Which is a problem for the news media, which is in the business of generating scandal, excitement and headlines. Journalists want candidates to attack each other; they want quotable, inflammatory headlines. They don't want to just ask the debaters, "What is your position on immigration?" Where's the incendiary soundbite there?

So, journalists are not necessarily well positioned to ask good debate questions. Why not try getting someone else to ask them? Academic historians or political scientists would be one route. A couple of serious, thoughtful, up-to-the-minute questions on the war in Yemen, or the current workings of Obamacare would be revealing. Even if the questions stuck at, "What would you do about tax policy?" that would be fine. Academics might be tempted to get into the weeds, but they'd surely stay away from gotcha silliness. And an expert might at least call Carly Fiorina when she confusedly lauds government retirement plans as an alternative to big government.

In a primary, you could also have the panel moderated by people with a stake in Republican Party politics, and an interest on getting candidates to pledge support to their issues. Someone from AEI, Heritage or Cato. On the Democratic side, someone from Brookings or the Center for American Progress. Primaries are about finding out who can best, or at least adequately, address different sections of the base. So have different sections of the base ask the questions.

Along the same lines, you could get former politicians, or even current ones who haven't endorsed yet, to ask questions. Neutrality isn't an issue in primaries; a GOP primary is for the GOP, so why not get the GOP to participate? At the very least, if you had Jim DeMint up there asking questions, you wouldn't get candidates whining on and on about the unfairness of the mainstream media.

The chances of breaking the journalistic lock on moderation is slim to none; the networks, like the reporters, are desperate for fireworks. Still, I'd like to see someone try it, just once. How much worse could it be?