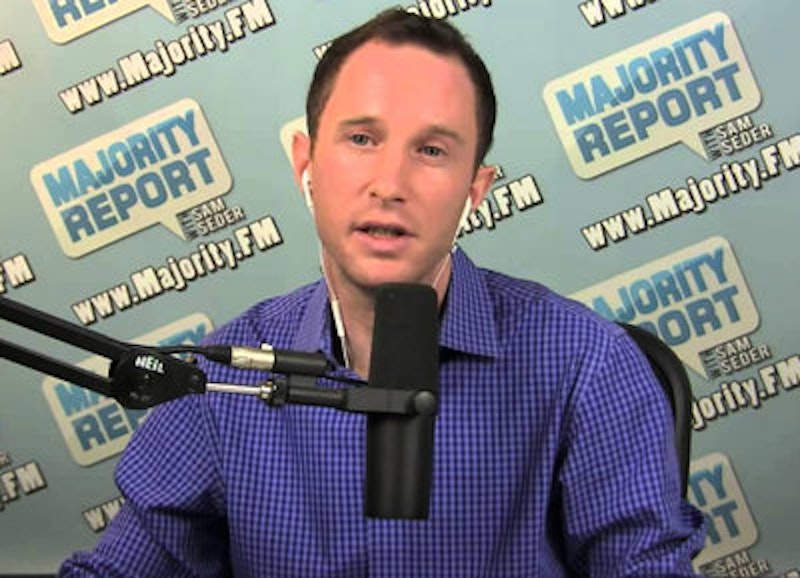 A noted atheist and outspoken critic of Islam, Sam Harris never has anything good to say about Islam. He called the religion “the motherlode of bad ideas” on Bill Maher’s Real Time program on HBO. Imagine the outrage back in January on his podcast when he had British “Muslim reformer” Maajid Nawaz as his guest: “What is the fuckin’ point of having more Muslims in your society? It seems perfectly rational to say we don't want any more. Increasing the percentage is not a help to anyone who loves freedom of speech and any other liberal values. It's only rational not to want to live in a world that looks like Jerusalem at the height of the intifada.”

That's a heavy-handed message. It certainly doesn't sound like one a public intellectual would make. Nobody said much at the time, but recently vocal champion of Islam, Reza Aslan, saw the words quoted in a tweet that he then retweeted. All hell then broke out among the myriad Harris haters who saw the incendiary statement as just the latest confirmation that Harris is a bigot. One of them was Michael Brooks, Sam Seder's second banana on his left-wing political show, Majority Report. In a recent episode, in which his contempt for Harris was palpable, Brooks devoted a segment to Harris’ words.

There's more to this story however. For the sake of argument, Harris was adopting the persona of someone in Europe who’d seen too many terror attacks. Brooks conveniently left it out, but Harris prefaced his blunt remarks with, “I think many people will feel:” He wanted Nawaz to respond to a widely-held, though not PC, opinion. Brooks then proceeded as if the words were Harris’ straight-up thoughts, which was no shock. Taking Sam Harris out of context is a favored tactic of regressive leftists, who instead of listening to what he says just wait for things they can cherry-pick and attack.

Even though it was clear that Harris was adopting a European persona, Brooks’ response, dripped with disdain, was strictly from the American point of view. “I would suggest,” he said, “that the way to preserve, quote unquote, liberal values is to protect robust constitutional norms while they're under assault.” What do Germans, alarmed by terror attacks in their nation and throughout Europe, care about the U.S. Constitution? Then, speaking of Trump, Brooks says, “A far-right extremist is trying to push a (sic) unconstitutional violation of non-religious (sic) discrimination, which is written into our constitution.” This sentence is mostly incoherent, but it refers to Trump's “Muslim ban.” Harris opposes it, as does Nawaz, so why bring it up? Perhaps it's to falsely suggest they do.

Harris reacted on Twitter with: “I just don't understand this level of dishonesty. Everything in this video is a lie.” Nawaz, who Brooks had said “really just comes off looking pathetic and embarrassing,” jumped in with: “Brooks, it would've taken minutes to check, *before* humiliating yourself, that Sam was setting up a hypothetical for me to knock down.” He then demanded an apology, but the only response Brooks had was to invite Harris on the show.

It's as if Brooks hadn't even bothered to listen to the response Nawaz, who identifies as a non-devout Muslim, gave to Harris’ immigration comment. He said it was an understandable response to fear, and called for a controlled immigration policy, arguing that an open-door approach would feed the far-right’s momentum and lead to further degradation of the EU. Nawaz has put his life at risk for his outspoken views about Islam, but Brooks treated him with colonial disdain. One of Brooks’ off-camera crewmembers mocked Nawaz for his lawsuit against the Southern Poverty Law Center, which put the activist on its list of anti-Muslim extremists. Brooks went along with it, as if the idea is ridiculous, although if he'd done his homework he'd realize the potential horror of such lists and the fact that Nawaz has never expressed extremist anti-Muslim sentiment. He doesn't express any anti-Muslim sentiment at all.

Harris and Nawaz are used to their left-wing critics getting triggered and resorting to underhanded attacks against them, but this one stood out for its shoddiness. One example: “Islam is not really about ideas. Religion is everything from custom, culture, philosophy to politics to social norms, many of which are problematic and terrible in all religions okay? Not terribly complicated.” Really? Religion is only about ideas. It resides entirely within the human mind. And it's not complicated? Few things are more complicated than the state of Islam in 2017.

Brooks didn't get any better as the show continued. Evaluating his demeanor towards Harris and Nawaz, one might think they'd just mugged a family member. He's way too emotional to argue effectively. Brooks said that Harris had given a “shout out” on the podcast to toxic ethno-nationalist Richard Spencer, when he'd actually mentioned Robert Spencer, and it wasn't even a shout out. He implied that Harris thinks all Muslims are terrorists, which is false, and also said that when Muslims kill Muslims, people like Harris think they deserve it. It was a bad faith effort that just makes him look like his only concern is “winning.”

There's no victory possible when you play the game as Michael Brooks does. The idea is to have open and honest debate, but he simply confirms biases for the already converted and trashes people personally. He even demeaned Harris's PhD from UCLA, as if that had any connection to the current debate. The host’s smug “I know so much that others don't” attitude is ineffective at advancing a point of view outside of the regressive leftist community. People don't tune into shows like this to learn something new. The irony is that Brooks does have specialized knowledge of the Middle East and the historical context of terrorism that are important to learn about. The problem is he has no idea how to communicate his knowledge in a way that might make somebody on the other side of the fence want to listen to him for more than a few minutes.