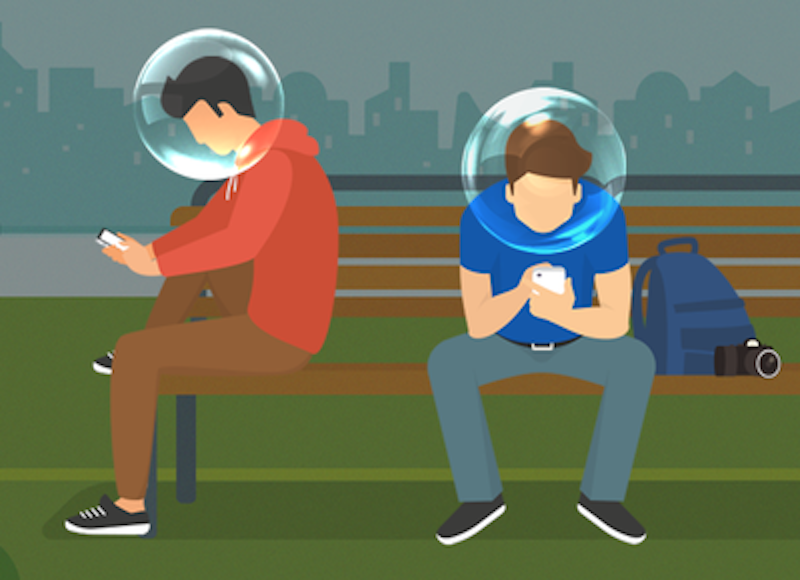 Even before the algorithms took over, I found it a bit unsettling how difficult it can be to step outside one’s own usual box to find reading material that offers new perspectives. It’s so easy to inadvertently, even subconsciously, return to your comfort zone, like the time I grabbed a short story collection off a bookstore shelf almost at random, only to find the editor went to the same college I did. We’re surrounded by a lot of “new” things that turn out to be fairly familiar.

Nonetheless, on July 5, the day after a Splice Today piece of mine was posted about politics, superheroes, and alternate universes, I realized I’d reached the end of my to-read book pile (maybe for the first time in my life) and, mindful of how many libertarians and conservatives I normally read, Googled for “new” “books” that are “left” and “protest”-oriented (while realizing, of course, that Google personalizes your results).

One of the first hits was a review of a book that was described as one of the first significant pieces of literature to arise from the Occupy movement. All right, sold! I walked to a bookstore and bought it the old-fashioned way, barely pausing to note the title (Dear Cyborgs) or topic, just to broaden my horizons.

After I bought it, the back cover was the first indication I’d failed. Instead of thinking outside the box, I had once more shoved my head up my own personal safe space.

The cover copy begins: “In a small Midwestern town, two Asian-American boys bond over their outcast status and a mutual love of comic books. Meanwhile, in an alternate or perhaps future universe, a team of superheroes ponders modern society during their time off. Between black-ops missions and rescuing hostages, they swap stories of artistic malaise and muse on the seemingly inescapable grip of market economics...”

On top of all that, the novel’s narrator is a superhero who likes karaoke bars and is sometimes a political ghostwriter. It’s as if I wrote this novel myself, it turns out. Oh, and the author, Eugene Lim, lives here in New York City, to boot.

The book is good. I’m not complaining. I’m just growing accustomed, like all of us, to assuming that only with superhuman effort will I ever again see the truly unexpected. I imagine we’ll have to try harder and harder to do that in the years ahead, a conscious rebellion against the algorithms (literal and figurative), in much the same way we strove in years past to talk to people from other towns, change the channel occasionally, or question prevailing religious assumptions.

As I write this, YouTube just offered me videos about kittens and Dyson spheres, so of course it knows me.

The algorithms have a lock on me—and the unsettling thing, as in the case of my Lim purchase, is that I don’t even know what portions of computer algorithms, mere chance, subconscious sorting on my part, and the general zeitgeist/great minds/wisdom of crowds effect led me to this familiar-feeling work of art. That’s without even getting into the more speculative possible influences such as synchronicity, matrix glitches, God’s plan, what have you.

Furthermore, the inescapability of the algorithms turns out to be a major theme of the novel itself. (Meta!) And this, I suppose, is roughly how the left feels about markets. Those things are everywhere, you know, even when you’re not looking. Lim implies that it is this sense of overwhelmed futility that shapes Occupy’s blend of activism and resigned inactivity, or at least his fictionalized analogue of Occupy.

I’ve thought since that movement began that it has a somewhat healthy sense of the magnitude of the political problem it faces, though I would have opposite policy prescriptions to Occupy’s on many issues. Still, in 2011 there was briefly a visible anarcho-capitalist (as opposed to just left-anarchist or socialist) component to the Occupy rallies.

There was at least a tiny chance, for a moment, even if it was never more than a hypothetical longshot, that AnCaps and Occupiers and a tiny resurgence of anarcho-syndicalists around that time in Europe, plus perhaps some populists of the sort who would end up Trump supporters, might all agree that the centrist Establishment is the common enemy and needs some adjustment (in something like the way the New Left made people suspicious of the Establishment 50 years earlier without offering one clear solution). The Establishment doesn’t respect strict right/left boundaries, so why should its opposition?

I notice one non-AnCap acquaintance of mine, who built that weird “shrine” you may have glimpsed in footage of Occupy’s Zuccotti Park encampment, is now attempting outreach by running for Congress from Queens as a Democrat. He started out so radical-left that this is something of a mature effort to reach across the aisle for him, assuming there isn’t just one aisle right in the boring middle.

He’s probably becoming a bit saner with age, but Dear Cyborgs makes me think he was also onto something with the ambiguous shrine—not because Occupy was doctrinaire like a religion, as detractors might fear, but because it was a little vague-yet-hopeful, like a more loosely-defined mystical impulse. There are worse things. Stalin, for instance. Or complete despair.

Of course, since I’m not mystical or religious, nor strictly speaking a leftist, now I have the troubling thought that maybe the algorithms will be the closest real-world thing to psychic predictions or prophecy. If there are no magical powers but there was (some argue) still something useful about bouncing ideas off of seemingly-random tea leaf configurations or mood swings during “psychic reading” sessions, surely refined algorithms will be even more useful. Surely they outshine anything even the most gullible user of psychics or horoscopes has ever claimed for those ancient methods. Google knows me better than any palm reader does.

However, at some point, even the most phenomenal predictions will start to seem routine—and randomness will be the exciting new oddity. Simply doing the unexpected may become art, protest, and spiritual affirmation in the very near future, claustrophobic as that thought may be.

Will efforts to be chaotic/good prove futile? That poignant question, and the very cautious answer “No, you at least have to try” are at the heart of Dear Cyborgs. I’m glad… something… led me to read it.