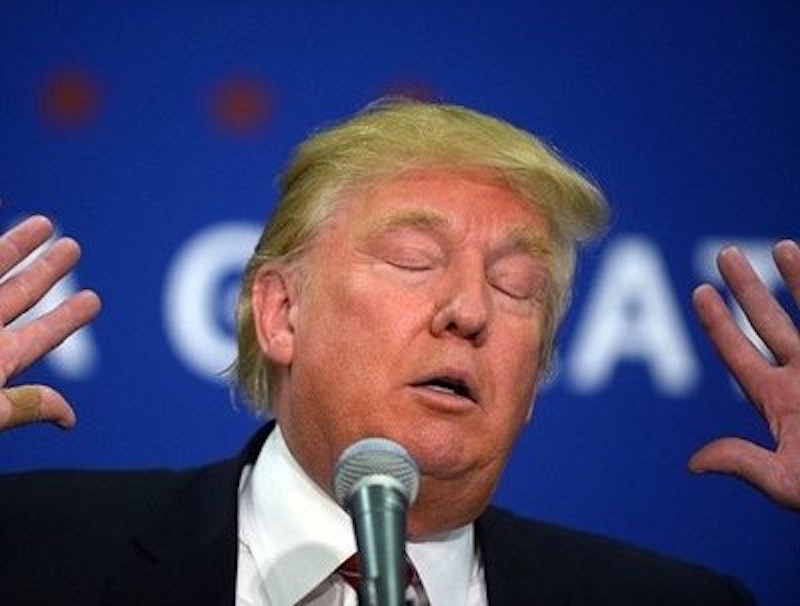 Donald Trump doesn’t know what he’s talking about. But talk he must: the cameras are on him. So he opens the spigot and lets the words gush. Then the officials he’s appointed, the people running the government, have to say they agree; otherwise he’ll notice and be displeased. The officials march before the cameras and announce they agree with babble, which loses them any respect the public once gave them. Trump didn’t plan this, his mouth just ran as usual. But the outcome serves him well. The officials, having become damaged goods, will find it a good deal harder to turn against their boss—they’re out there on the same limb he is. Trump, as a brainless but hyper-active mouth that has fluked into power, is short of friends with the know-how to run a government. Therefore, he’s been forced to include a good number of strangers in his inner or inner-ish circles. But the strangers are turned into confederates by the Trump mouth. Make outsiders publicly swear to enough lies, and they’ll be on the same side as you are. They may not like it, but that’s where they’ll be.

The above represents most of Matthew Yglesias’ “The Bullshitter-in-Chief,” which takes 5000 words to explore the idea that Trump expects no one to believe the shit he puts out. The article bumps from here to there. Past the halfway point, we get this: “Critically, though bullshit plays a genuine functional role for the Trump regime, there is no particular reason to believe its adoption as Trump’s primary rhetorical mode is a strategic choice.” Mention that up top, why don’t you? A stream of paragraphs about the cunning of the situation, and we didn’t know the cunning had nothing to do with the situation’s author.

A point Yglesias does make at the top is that a man named Harry Frankfurt wrote an essay called “On Bullshit.” To recap Frankfurt’s argument: a liar wants to fix the agreed-on record of facts so that it says something untrue; a bullshitter, by contrast, doesn’t care about the record. What the bullshitter wants people to take away from his or her discourse is simply that the bullshitter talked and it sounded all right. Pure bullshit doesn’t even have a meaning. It sounds like something has been said, but you’re not sure what, and closer inspection causes more confusion. Yglesias points to Trump as a quintessential bullshitter in the Frankfurt sense, and I’ll concede that Trump comes as close as anybody could. Perhaps the fact that he isn’t this being just shows that it’s not humanly possible, the way an Olympic gold medalist still isn’t Superman.

Trump bullshits a tremendous amount, but he also lies a tremendous amount. There are specific points that he wants people to believe: that he’ll make sure everyone has health insurance, that he’ll defeat ISIS within x number of days, that really he won the popular vote. These lies of his are shoddy and he doesn’t mind tossing them aside. But while they’re around, they’re supposed to convince people.

Given how much meaningless garbage comes out of Trump’s mouth—for a big-league politician, he spews more Frankfurt-style bullshit than anyone but Sarah Palin—it’s surprising how Yglesias has to fudge his examples. After a bullet list of allegedly “pointless” lies, Yglesias writes, “None of this is useful in moving the ball forward on any kind of policy goal.” Au contraire. One of the lies is that NATO members owe the US money. That’s called smearing an opponent: Trump hates NATO and wants to undermine it. Another from the list is that China kept manipulating its currency until Trump became president. But that’s easy: Trump wants the public to think he gets results, and specifically that China will screw us unless he’s standing guard. A third: the popular vote was fixed, and really Trump won. The advantages of this line are obvious. It’s better for a politician if he gets more votes than the other fellow.

I think Frankfurt’s bullshit idea is a bridge that helps head types discuss a common reality, namely that spoken words can matter less as verbal communications than they do as atmospherics augmenting the speaker’s presence. Or, as one might say, words just help a person talk, and talking is just the Stereophonic way of being who you are. You’re broadcasting yourself, and the words help. Sometimes there’s a message you want to deliver, but the message can be dropped and you’re still there, broadcasting.

This is commonplace in day-to-day conversations with people, at least in my experience. But progressive intellectuals, I guess, are head types. They’re too cerebral to experience what goes on in a room, not until they’ve processed it with a theory. Frankfurt arrives with his playful thoughts on bullshit. The progressive thinkers unbend and experiment; they take a look at what’s in front of them. Then they have to square the results with the theory, which apparently can take 5000 words.

I’d say bullshitting suggests a level of shoddiness beyond lying, and Trump also enjoys reaching this level. But that connection is what Yglesias might call emotive. Frankfurt’s bullshit theory, as a matter of intellectual explanation, doesn’t cover the phenomenon that is Trump with an open mouth. He’s a huge bullshitter, but he’s a huge liar. He’s all-over verbal and moral shoddiness, what Yglesias might call a global case of shoddiness. That’s the angle I suggest for Trump examiners: crappiness, shoddiness. But Frankfurt’s a start.