Pence is the Incandescent Flame of Religious Right

A hard choice for those who detest Trump. 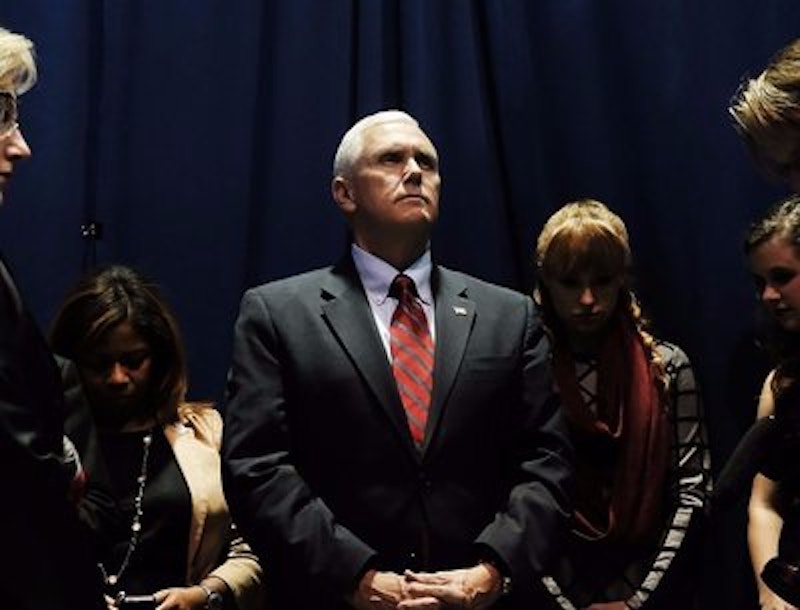 Be careful what you wish for when talking of President Trump’s removal from office. Itching to succeed to the presidency is Vice President Mike Pence. Next in line is House Speaker Paul Ryan. And after him comes Senate President Pro Tem Orrin Hatch. Anchoring the top-four tag-team relay is Secretary of State Rex Tillerson. Titillating as it may seem on the one hand, but equally depressing on the other, that’s the immediate line of succession if Trump leaves a vacancy in the Oval Office.

Not suicidal yet? First, release the breath you’ve been holding. Energy Secretary Rick Perry, or even Education Secretary Betsy DeVos, to everyone’s despair, are not among the in-waiting. They rank a piddling Nos. 14 and 15 respectively, dashing their fading chances of becoming president. But get a load of the remaining six, in this order: Treasury Secretary Steve Mnuchin; Defense Secretary James Mattis; Attorney General Jeff Sessions; Interior Secretary Ryan Zinke; Agriculture Secretary Sonny Perdue; and Commerce Secretary Wilbur Ross. Surely the gods jest. But, then, we are taught in civics class (if such a thing still exists) that any American-born person can grow up to be president—a lesson we’ve learned the hard way.

Thus, we have a panorama of Trump’s round table, a collection of billionaires, millionaires and generals that is supposed to signify, in Trump’s image, that good money means good management. The cabinet portrait also includes a bobblehead or two, none more pliant, until now, than Pence, Trump’s Little Sir Echo. Pence is the man who would be president if anything legal, or otherwise human, befalls Trump. And he’s beginning to let his ambition show by not first getting permission slips to go it alone. If further evidence is needed, Pence has hired a new chief of staff and Mr. Fixit, Nick Ayers, 34, a Republican operative and former executive director of the Republican Governors’ Association.

There are three legal ways out of this mess—impeachment and the 25th Amendment—and those who wistfully cite the emolument clause that prohibits profiteering from the presidency wherein Trump is both landlord and tenant of the Trump Tower in Washington. Any one option would give us Pence, and he’d be free to select his own vice president, preferably Jesus, if he had the choice. But that choice might not work for Pence, either. Jesus believed in the separation of church and state (Mark 12:17). Pence would fuse the two into a caliphate, based on his beliefs. Pence is the incandescent flame of the religious right and a man so chaste, or so weak, that he has vowed never to have a meal after dark with any woman but his wife.

When it became known, for example, that Donald Trump Jr. met with a Russian lawyer to gather dirt on Hillary Clinton, Pence’s office issued the following statement: “He was not aware of the meeting. He is also not focused on stories about the campaign, especially those pertaining to the time before he joined the campaign.” That’s more than a few chilly degrees of separation. But Pence shouldn’t be allowed by voters to disengage from the president whose views and programs he shares and whom he has supported and defended as Trump’s principal apologist as if they’re joined at the hip.

The line of succession was laid down by the Founding Fathers, who’ve hounded us for 250 years from their graves. It is set in the Constitution and the Presidential Succession Act of 1947 and is occasionally tweaked to accommodate officials of newly created cabinet departments. It allows the next person in line to step up to the presidency “if the president becomes incapacitated, dies, resigns or is removed from office.”

Impeachment is a stretch right now because Democrats lack control of the House, where the process originates. You can give long odds, though, that impeachment will happen if Democrats win back the House in 2018. Nonetheless, Democratic Leader Nancy Pelosi has agreed to allow Rep. Brad Sherman, a fellow Californian, to introduce an article of impeachment—the second article to be proposed—though it lacks support even among Democrats. The 25th Amendment allows the assembled cabinet to simply remove a president from office because he is unfit to serve for whatever reason. This, on its face, is unlikely to happen. As is often said in politics, if you’re going to shoot the king, better not miss.

Trump’s a few croutons short of a salad. But Pence is a real piece of work, a rigid ideologue of the first order. A lawyer, talk-show host, six-term member of Congress and governor of Indiana before Trump plucked him from sure defeat for reelection, Pence is a former Catholic and now an evangelical who describes himself as “a Christian, a conservative and a Republican, in that order.”

Over the years and even now, Pence is anti-abortion, opposed to LGBT rights, full-out for the NRA pro-gun agenda, opposed to stem-cell research, refuses to accept climate change, dismisses evolution and accepts strict creationism, supported privatizing Social Security, voted for the Patriot Act which encroached on freedoms, opposes sex education, favors severe restrictions on immigration and opposed the Dream Act, is a born-again Christian and as governor supported and signed Indiana’s Religious Freedom Restoration Act which angered his state to the point where it probably would have cost him reelection.

This is the dogma according to Pence that Trump would bequeath us to lead a diverse nation. We’re better off under Trump, who talks a lot but gets little done, than under a modern-day Savonarola who would ignite his own bonfire of the vanities as president.

Trump’s ravings on Twitter may not get him impeached or removed from office, but they’re entertaining for the falsehoods they propagate as well as the Strangelovian psyche they belie. For if Trump has learned one thing as president it’s how to dig a hole but not recognize it while the task is underway. And the laying on of hands by the likes of Pat Robertson, the Elmer Gantry of the religious right, will not wash away the many fibs and falsehoods.

The Trump White House is under siege from within and without. The Russia imbroglio continues to follow Trump like an ominous cloud. It was there with him in Paris, where he traveled to celebrate Bastille Day, when he was again compelled to defend his son, Donald Jr., for meeting with the Russian lawyer who duped him. Trump defended him as a naïve kid who’s unfamiliar with the sinister side of politics, but whom he nevertheless trusts to manage the family’s billions in business activity while Trump dallies at being president.

The Russia story now leads directly to the door of the Oval Office with Trump’s son in-law, Jared Kushner, ensconced in the White House as a senior adviser to the president, identified as having participated in the same meeting as Donald Jr. Kushner’s security clearance is now in question. To add to the growing intrigue, a fourth person, a former Russian intelligence officers, has also been identified has having been in the meeting. As Shakespeare observed, “When trouble comes it comes not in single spies but in battalions.” As if proof were needed, the Trump family is lawyering up for the ever-expanding special counsel’s inquiry.