Trump talks a lot about infrastructure, but Schaefer did something about it. 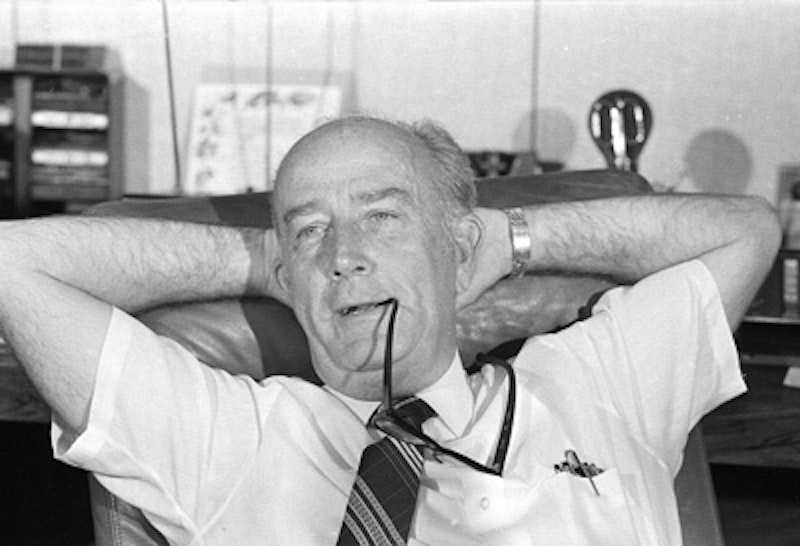 President Trump and William Donald Schaefer would’ve loved each other. They’d have a lot in common, like two nuts in a shell. Trump employs Twitter, Schaefer wrote nasty notes. Trump is narcissistic, Schaefer was idiosyncratic. Trump is authoritarian, Schaefer was a Dutch-uncle scold. Trump wallows in flattery, Schaefer reveled in it. Trump can’t take criticism, neither could Schaefer. Trump bashes the media, and so did Schaefer. Both live, and lived, in the fantastical world of my-way, or get-out-of-the-way. And let’s, for the sake of brevity, skip over egos.

Maryland has produced a good share of loveable as well as despicable eccentrics, political to courthouse hang-abouts—Mr. Diz, Melvin Perkins, Hyman A. Pressman, Morgan Amaimo, George P. Mahoney, Robin Ficker, Thomas D’Alesando Jr., to name a few, but none as revered, and feared, so much as Schaefer. Cross him and get a cold shoulder that could send a chill through a bucket of ice. But Schaefer’s peculiar demeanor was not driven by malevolence as much as it was by shtick, for most of his zany behavior was simply yanking our chains. It was his way of test-polling for reactions. But somewhere, Schaefer, too, went over the edge in slow but decisive motion.

Before teary-eyed nostalgists pop their blood pressure cuffs, the comparison of Schaefer and Trump ends with their mercurial personalities. Unlike Trump, Schaefer was a civic cheerleader who had empathy for his constituents as well as a dream of homogenizing a divided city and state. Trump feeds the division nationally, encouraging nationalistic violence and hatred.

Schaefer surrounded himself with competent people who worked to assemble the disparate parts into a symbiotic whole. Trump surrounds himself with sycophants and converted them to liars—to defend his own misstatements and fabrications. Schaefer governed like a manic Machiavelli; Trump has no grasp of governing beyond telling audiences, “I’m the president.” But both demanded fierce loyalty, Trump with his televised cabinet fawning over him, and Schaefer whose staff was once likened to “Kool Aid kids,” prepared to drink from the poisoned cup at his whim.

Marylanders of a certain age shouldn’t be surprised, or alarmed, by Trump’s erratic, often vulgar, behavior because they actually lived in similar conditions for many years. Millennials and new arrivals missed a terrific and entertaining show and must settle for Trump’s daily Tweets without Schaefer’s incessant bleats. But those who were around remember Schaefer as the persnickety do-it-now four-term mayor of Baltimore, two-term governor and two-term comptroller of Maryland—50 kvetchy, bellyache-y, angry years in public office that earned him (behind his back) the nickname Mayor Annoyed, intentionally rhyming with paranoid.

Schaefer was finally voted off the public payroll as comptroller in 2006 after several lapses in public behavior that uncannily mimic Trump’s bizarre conduct. That led voters to wonder whether Schaefer, like Trump today, appeared to be coming unhinged. On one occasion, he publicly berated a Hispanic waitress at McDonald’s for not speaking proper English and failing to serve his happy meal fast enough. In another display of political indelicacy, he referred to a potential opponent, Anne Arundel County Executive Janet Owen, as an old lady in baggy dresses. What finally led to Schaefer’s undoing, though, occurred at a Board of Public Works meeting, when he expressed admiration for a young female staff member’s backside and asked her to turn around and jiggle by a second time. Schaefer died in nursing home care in 2011.

Trump’s coarse behavior is a carryover from his louche life in New York when he regularly fed fanciful items and questionable boasts about himself to gossip columnists at the city’s gullible tabloids—often under a false identity. He was also a regular guest on the X-rated Howard Stern show. On Stern’s show, he once described his daughter, Ivanka, as “a piece of ass,” and he openly discussed his wife, Melania’s “contraception.” And Trump was very explicit, verbally and visually, about groping women’s body parts. As president, Trump has continued his fixation with women, assaulting television hosts Megyn Kelly and, most recently, Mika Brzezinski, via Twitter for their questioning of him and his abilities.

Trump fumes and fusses on Twitter, responding to cable news reviews of his administration, attacking his critics as well as his political enemies. Most frightening of all to allies and enemies alike, Trump conducts international diplomacy in angry bursts of 140 characters or fewer. Schaefer pre-dated the age of Twitter and unleashed his fury the old-fashioned way. He took pen in hand and scribbled his rage in short spluttered fragments that usually lacked verbs. (I have a collection of 10 letters Schaefer wrote me fuming over columns he disliked.)

Schaefer and Trump are both are showy and theatrical. Trump was a bona fide television star and still is whenever he chooses to face the cameras. Schaefer, as the world knows, once slipped into an old-fashioned bathing suit and dunked into the Aquarium seal pool. And when segueing from mayor to governor, Schaefer dressed in an admiral’s uniform and set sail on a yacht from Baltimore to Annapolis.

Both Trump and Schaefer like their news sunny-side up. And both exhibit a flair for deflecting stories they dislike—Trump with tweets in a different direction or mode of attack, and Schaefer by pointing to Harborplace whenever another program or part of town was criticized. Schaefer, too, found comfort in characterizing critics as “negative,” and by making himself and Baltimore one and the same. Criticize one, you criticize the other.

Trump’s feud with the media as “the enemy of the public” is well-known. Press briefings are mostly not televised, mainly so they don’t obscure Trump’s tweets. Trump has met the press face-to-face only once, and his press secretary, Sean Spicer, is about to get the hook for not being sufficiently aggressive in his defense of Trump. Schaefer expressed his disdain toward the media in other ways. He often waddled out to news conferences by flipping the bird to assembled reporters. And on one occasion, when asked a question he didn’t like, Schaefer said, “That’s the dumbest damned question I’ve ever heard,” turned and walked out of the news conference.

Trump has a running feud with CNN, which he classifies with other media outlets as “fake news.” Trump recently posted a doctored video of him body-slamming at a wrestling ring Vince Mahon, who was wearing on a cap the letters CNN, which was widely interpreted as a signal to assault reporters. Schaefer, by coincidence, was a huge fan of Hulk Hogan and once went to a Hogan match in Atlantic City.

Schaefer and Trump are both bullies, Schaefer by coaxing and cajoling, Trump by lying and bludgeoning. But the appearance of similar personalities takes a curious turn. To begin with, Trump is the first president who has no government or military service. He was a Fordham transfer to the Wharton School of Business, but took the soft courses instead of the tough stuff, though he often cites his degree as proof of his brilliance. Schaefer, by contrast, saw combat duty as a ranking Army officer in World War II, earned a law degree and a master’s in public administration. He also worked his way up the ranks as a City Council member and its president before ascending to the city’s and the state’s highest offices.

Trump talks a lot about infrastructure, but Schaefer did something about it. As a bricks-and-mortar mayor, Schaefer remade Baltimore. Schaefer convinced Gov. Marvin Mandel to build a subway, the World Trade Center and the Convention Center. He then extended Baltimore’s entertainment zone in one contiguous stretch along Pratt St., from Paca St. to Fells Point. As governor, Schaefer added the light rail system and the downtown stadiums. And Schaefer beamed when Trump’s 282-foot yacht, “Trump Princess’” (before he was forced to sell it) came calling to the glitzy new Inner Harbor in the 1980s. Schaefer erected signs with his name and picture at construction sites wherever he could. They were real. Trump hung Time Magazine covers of himself at his golf resorts. They were Photoshop phonies.

Trump and Schaefer were both Democrats. But Trump emerged as a Republican after fiddling for years about running for president and as the nation’s leading birther—the conspiratorial claim that Barack Obama was born in Kenya and not America (Hawaii.) Schaefer, flattered beyond party lines by a phone call from President George H. W. Bush, crossed over in to endorse the Republican for reelection in 1992.

Finally, Trump and Schaefer both wear permanent masks, Schaefer a scowl, Trump a sneer, as if they both woke up in the morning with a smile just to get it over with.