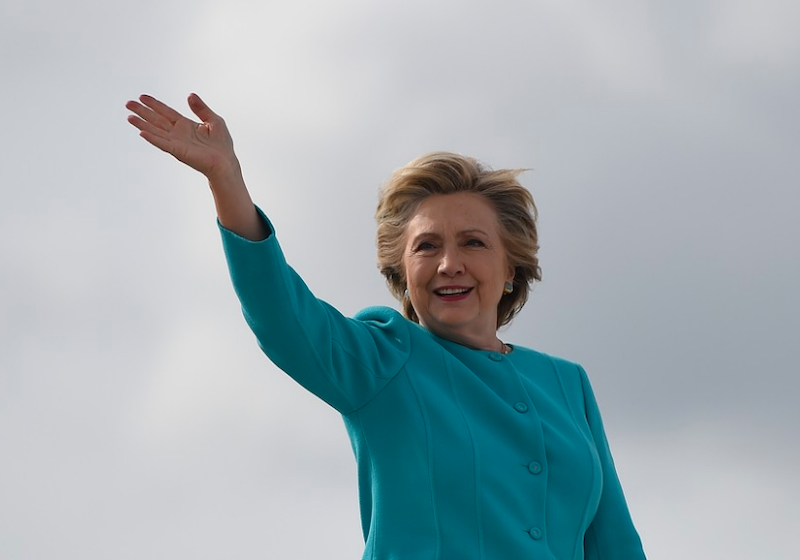 Everyone’s mad about Hillary Clinton: “Lock Her Up” idiots, Sanders supporters that reluctantly voted for her, other Democrats that white-knuckled their way through her incomparably clumsy campaign. But she’ll always have her cult of obsessives and sycophants that muse about her well-being and fantasize about what could’ve (“should’ve”) been. Embarrassing Twitter accounts like @IfHillaryHad retweet compliments while tossing out gems like this: “DAY 103: Spoke in complete sentences. Made Ryan cry (and I'm not sorry about it). Sent Bill to Crate & Barrel to pick up a new crockpot.” Would love to read about Hillary pegging Bill and Huma castrating Anthony, Crate & Barrel is boring. Get creative. There’s nothing else to do…

Except continually analyzing and re-litigating the results of the election. Hillary took another step out of the woods yesterday, telling CNN, “If the election had been on October 27, I would be your president.” This was directly after she took “absolute personal responsibility” for her loss. Getting seasick. Though Donald Trump may be the most famous person in the history of the world, Hillary Clinton’s up there, and as nauseating and infuriating and frustrating as our president is, the Clintons’ unique brand of intellectual dishonesty and naked scheming has had its day in the sun, and it’s time we took that horse around the barn.

Chris Hayes, by no means a party-line Democrat or a Clinton obsessive, said yesterday, “I find this obsession with Clinton taking full responsibility for her loss from ostensibly ‘objective' observers really weird.” Really? Even after her and her husband’s history of making excuses, not taking responsibility, and blaming other people? Whatever. I’m sick of the Clintons, and I’m not alone. I wouldn’t be writing this if not for the unnecessary and absolutely characteristic coda to her apology about James Comey and the FBI. This isn’t about re-litigating the election, it’s about dispensing with a worn out politician that can’t be trusted to try another run in 2020.

In a mostly, um, “objective” opinion piece for The Washington Post, Jennifer Rubin expressed the same, common sentiment among weary Democrats: “I’m not sure why it matters now—and still. I don’t know what psychic pleasure people get out of her public self-flagellation. (Gore was not required to do so after the 2000 loss.)” Gore and Clinton’s losses are not comparable—in 2000, people rightfully blamed people like Katherine Harris, Jeb Bush, and the Supreme Court. His loss was razor-thin, and Hillary’s margins were bad, but Trump won. No one is contesting that anymore, not even Jill Stein. Also, the Rust Belt losses that killed her highlighted a running theme of her campaign: obvious mistakes, maddening hubris (remember “expanding the map”?), and the alienation and hostility that Sanders supporters and former Obama voters felt toward her for… well, a number of reasons.

Rubin continues: “I understand the ongoing angst over the Trump presidency (and share it!), but it does seem a bit perverse to insist Clinton—who apparently apologized to Obama for the loss—continue to rend her garments in public every single time she shows up.” Again, not the issue—the Comey caveat renders her “apology” moot and shows not only that she’s learned nothing since November, but that she’s positioning herself or her daughter to run for office again. She was already one of the most disliked people in the country, but now Hillary Clinton will forever be the Buffalo Bills of politics. I don’t care if she takes full responsibility for anything, but the ire for her is real because, unlike Trump, she really hasn’t changed at all since November.