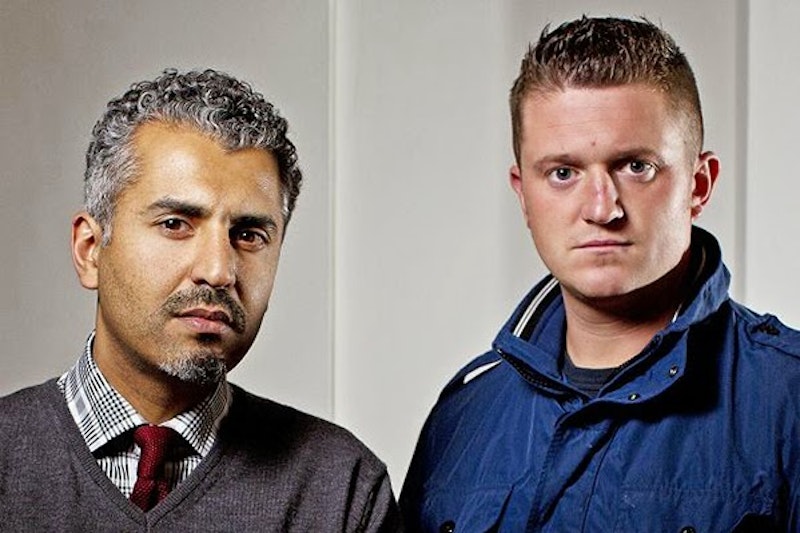 British anti-Islam crusader Tommy Robinson is pissed off. The Guardian recently published a piece by Quilliam Foundation researcher Julia Ebner lumping him in with far-right white supremacists that enraged him so much he paid an unannounced visit (with camera and microphone) to Quilliam’s London offices to confront her.

Quilliam's staffers didn't receive the feisty Robinson in the spirit of open exchange. Ebner attempted to spin her story to her unexpected interlocutor, but his sudden arrival panicked the skittish Quilliam people, who then decided not to allow the two to converse. Eventually they called the police and had him escorted into the street.

Ebner tried to tell her surprise guest that she hadn't specifically called him a “white supremacist” in her article, but it's hard to read it and come away with the impression she’s making much of a distinction between him and banned far-right group National Action, which held a Miss Hitler competition in 2016. Robinson quit as leader of the English Defence League (EDL) in 2013 over his concerns about the “dangers of far-right extremism,” and has since disassociated his views from those of groups like National Action.

The office visit was the latest chapter in the feud that's broken out between the U.K.’s two most prominent critics of Islam—Robinson and anti-extremism think tank Quilliam's founder, Maajid Nawaz, who’s a reformed former Muslim extremist. While Nawaz has publicly backed the EDL founder in the past, he’s lately called him an extremist. In Robinson’s opinion, Nawaz's approach to reforming Islam isn't sufficiently hard-edged.

Robinson has criticized Quilliam for its class-based hypocrisy. As he sees it, because they wear ties and are considered part of the metropolitan elite, they get away with saying the same things he says. Because he's working class, which the media portrays in caricatures, he's a bigot and a white supremacist. I've seen him accused in this way over and over, but have yet to find one piece of evidence to support the charges. Watch his appearance on the BBC television program Free Speech, where he’s subjected to 15 straight minutes of such treatment.

It's no wonder Robinson’s sensitive about this issue. As a lightning rod for controversy, he expects flak, but there's nobody in the U.K. who's been more unfairly maligned than the native of Luton, England. Exposing the dark side of a powerful religion with a death-fixation has made him a target. Many “religious” people would like to see him dead. Most Muslims in the U.K. have dark skin, so Robinson's opponents take the easy route and call him a racist. That's what the left does. It's a lot easier than defending the teachings of Islam.

The media class and the comfortable British left don't know how to handle the rough-edged Robinson because he doesn't play by their genteel rules. His uninvited appearance at the Quilliam offices affords them yet another opportunity to characterize him as a barbarian, even though he was polite and never presented any sort of menace. They'd prefer he offer a more conventional, “respectable” rebuttal, as if The Guardian article, which got tweeted out to the publication’s 6.4 million Twitter followers, were itself respectable.

Quilliam’s playing a dirty game. They’re participating in the ongoing pigeonholing of the working class as ignorant white racists. If the think tank is serious about reforming Islam, this should be the last thing they'd want to do. Automatically smearing Islam’s critics as bigots is a popular and successful tactic to silence them.

If Quilliam's really dedicated to exposing the truth, then it shouldn't get hung up on propriety and convention. Robinson barged into their offices and was trespassing? Who cares? He got pissed off by their distortions so let him have a direct talk with Julia Ebner and sort things out right there on the spot. That's how you cut through layers of bullshit in a few minutes. Instead, they acted like the staid BBC, which regularly suppresses the truth. Sucker-punching someone and then calling in the cops makes Quilliam look like elitist cowards. It's emblematic of how the metropolitan class deals with the working class from the safety of its posh neighborhoods.

Besides implying Tommy Robinson’s a white supremacist, Ebner’s article characterizes him—just like every other mainstream media outlet does—as “far right.” The intent is to marginalize him and avoid discussing uncomfortable issues. How many of these outlets have actually asked him what his politics are? My guess: zero. I asked Robinson about his politics. “I'm simply opposed to the violence and fascism in Islam,” he replied. “The rest of my political views are liberal.”

The British media’s not interested in asking Robinson what his politics are because it interferes with the story they want to tell. If he self-identities as a liberal on many issues, why isn't anyone writing about that? Maajid Nawaz and the Quilliam Foundation are supposed to be bucking the MSM’s dishonesty on the topic of Islam. They know Robinson's not a white supremacist. If they don't reverse their current course, they may find that their most valuable asset—their credibility—has vanished.