Trump’s Only Goal Is Crushing Opponents

But Nancy Pelosi cleans his clock. 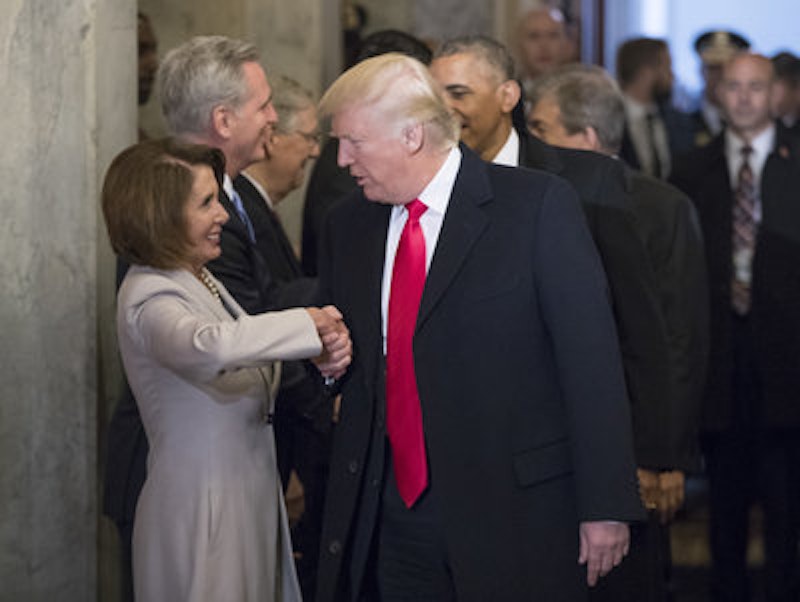 Here’s an authentic ration of Fake News: President Trump’s a hard-nosed, no-nonsense, tough-as-titanium negotiator. He’s said so. He’s published books about how tough he is. Trump’s so tough he let the Democrats walk away with $5 billion in new domestic spending in the $1.1 trillion stop-gap budget for which he got next to nothing in return—not even his illusory border wall. He’s angry because he’s been made to appear soft.

And now Trump’s ponied up $8 billion in new money to show how tough he is by forcing a narrowly won vote on the House Republican version of health care so he can now claim at least one dubious legislative victory even though the bill is viewed as likely DOA in the narrowly divided Senate. Most health care experts doubt that Trump’s $8 billion sweetener will benefit people with pre-existing conditions as intended. But he also stole $800 million from the Medicare poor to give a tax cut to the Cadillac-plan rich. Trump’s Rose Garden after-party was the sound of one hand clapping.

Trump cares not a whit about content. He cares only about winning and crushing his opponents. So, it must’ve been humiliating to have his clock cleaned by House Minority Leader Nancy Pelosi (CA), the more so because she’s a woman, a liberal, a feminist, and from San Francisco, for crying out loud, where half the population is gay, and there isn’t a trace of rust—as in rust belt—in the entire gilded Bay Area. And that’s the rub. Pelosi’s not from Trump Country, where tough guys drink their Perrier from the bottle, and she hammered him and she’s rubbing his nose in it. Pelosi’s making Trump appear not so tough, which wilts his macho-man image, though he still pouts when ruffled.

Trump’s such a tough negotiator that he’s now invited two of the toughest guys on earth to the White House. He wants to test his tough negotiating skills on North Korean leader Kim Jong Un and Philippine President Rodrigo Duterte (not to mention that Trump has business interests in the Philippines.) Trump’s giving Un exactly what he wants—recognition as an equal among equals on the world stage. Un exterminates family members who get in his way and Duterte has eliminated 7000 drug dealers just for sport and without due process. Compared to the two, Vladimir Putin’s a pussy. But neither is a match for tough-guy Trump. But who knows what they’ll talk about. Maybe they’ll arm wrestle. That’s a tough guy thing—as long as Trump is allowed to win.

Tough guys eat chocolate cake. Trump said so. Chinese President Xi Jinping didn’t come to America to feng shui Mar-A-Lago. He was invited to show how tough Trump is about currency manipulation. But Trump’s whisperers advised it was no longer a concern, so Trump backed off, his toughness intact. Instead, one tough guy to another, Trump encouraged Xi’s help in dealing with another tough guy, North Korea’s Un. Xi is the smoothest of the tough guys. His chipped edges don’t show, and he has a polite smile.

Trump has no time for softies. That’s why he exchanges phone calls with only his equals, strongmen with killer instincts such as Un, Duterte, Putin and Turkish President Recep Tayyip Erdogan, who has all but suspended Democracy in Turkey to enforce his will and whims and hang on to power. Trump also has on his brimming plate a problem that will demonstrate what a really tough negotiator he is, and that is reconciling the differences between Israel and Palestine so that peace can reign in the Middle East. This one is tougher than running short of eggs at the annual White House Easter Egg Roll. But if anybody can bang heads and make it work, Trump can. Ask him. As he’s said, “Only I can fix it.”

Trump’s so tough he likes being surrounded by other tough guys, especially generals with stars on their shoulders, bars on their sleeves and lots of metal and ribbon on their chests. Trump’s so tough he managed to avoid military service. Trump’s no wimp like George W. Bush, who famously said that when he looked Putin in the eye he saw his soul. What Trump sees in Putin is not only business opportunity, but a bare-chested, black-belted Karate fighter who’s his equal in toughness. That’s why Trump enjoys the phone calls with Putin and even looks forward to the planned get-together so the two can work out a peace deal for another tough guy, Syria’s Bashar al-Assad. Beside Putin, who Sen. John McCain called a “butcher,” (Putin also snuffs his opposition) it’s an even match. Trump will appear tough, so tough that Putin will get to keep his naval base in Syria as part of the deal.

Trump’s having a difficult time settling on another tough predecessor president as a mentor and role model. John F. Kennedy? Ronald Reagan? Abraham Lincoln? How about Andrew Jackson, a tough old cuss who gave us a brief spell of muddy boots democracy. Trump believes that inviting a few roughnecks and boozehounds to muddy up the White House, as Jackson did, is the origin of populism. And somehow Trump associates Jackson with the Civil War. With Trump’s tough-guy knowledge of history, he probably believes the Civil War was about the price of cotton.

And now Trump and Jesus are in the same pew at 11 o’clock on Sunday morning. Trump, the tough guy, went soft on God. Trump signed another of many executive orders, this one easing the prohibition against religious institutions directly engaging in politics without jeopardizing their non-profit tax-exempt status. Promise made, promise kept, to the evangelicals and fundamentalists who supported him. This is the same bluster-prone Trump who told the NRA that freedom (and inferentially, guns) is a “gift from God,” without considering the millions of lives that helped to secure that very human and fragile gift that we enjoy.

Trump pledged during his campaign to be tough on Wall Street, a contrapuntal attack on Hillary Clinton for accepting huge fees for speeches whose content she refused to divulge. Trump’s tough love is a huge tax break to the Street’s kleptocrats. Trump’s other notable hardline gift to the monied class is one to those who’ll earn their money the hard way—by inheriting it. Trump proposes to eliminate the estate tax. And who might benefit more from that tightwad gift than the Trump children who will inherit Daddy’s billions (we’d know how much for sure if he’d release his tax returns.) The swamp’s no less fetid since Trump’s arrival.

Trump’s toughness often inhibits intellectual function. He still doesn’t grasp the concept of separation of powers. He has threatened, for example, to reorganize the 9th Circuit Court that has repeatedly blocked his travel ban (federal judges are lifetime appointments.) And he has counseled the Senate to eliminate the filibuster because it slows the process and interferes with his agenda. Senate Majority Leader Mitch McConnell quickly batted down the president’s suggestion. The filibuster’s there for a reason.

Trump claims to be a quick sketch, but he’s a slow learner. Trump’s accustomed to the one-on-one face-to-face business of toughing out land deals and construction costs (some of which he pays, some not.) Tough though he may be, Trump hasn’t yet figured out that Congress is pretty much the same way. It’s not a 535-member monolith that can be ordered into lockstep by a presidential bark. Its members and their constituents have individual wants, needs and peccadilloes. And very few congressional districts have identical problems that can be solved with a single dictate. You’d think a tough guy would’ve figured out that members of Congress have to be treated as individuals and not as a gang. But that’s the way it goes in the alternative universe of fake news. Fake news, for Trump, is a necessary shield: he can’t allow his supporters to consider actual facts and events and to think, for a pellucid moment, that they might have been wrong. The real fake is Trump.