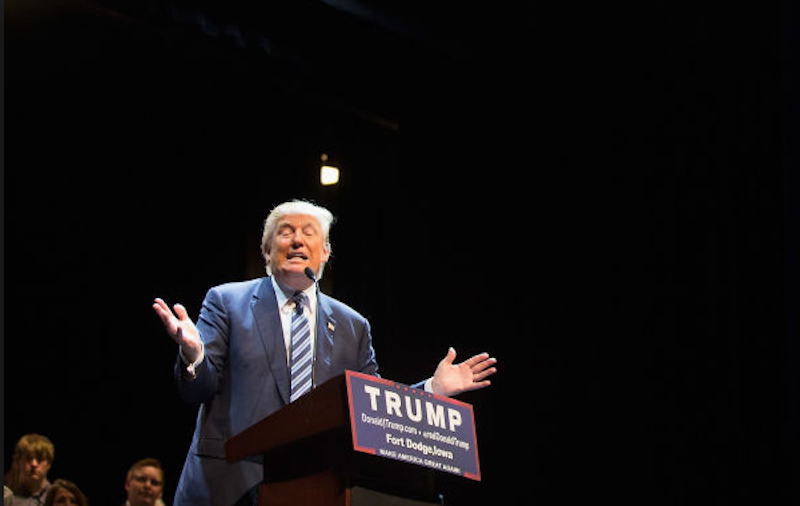 I could swear Donald Trump said “fu—” I mean, as in “On leadership I was number one by fu.” At which point he broke off and said, comprehensively but a bit disjointedly, “Everything.” Later, talking about oil fields controlled by ISIS, he said, “I would bomb the shit out of them.” He said this loud and clear—he seemed impressed by his own resolution—and received a good hand from the crowd. He referred to the reporters present as “these idiots here” and also as “scum” and “garbage,” and he gave a cheer for the Taliban's abuse of Sergeant Bowe Bergdahl. “Boom, boom, boom, they beat the crap out of him,” Trump said. “Which is fine. That's fine.”

This was all at Fort Dodge, Iowa, during the now famous speech where Trump got a bit wiggy about Ben Carson. Pundits suggest that this incident may finally do Trump in. They have a case. Trump's nine-minute fulmination about his rival was so politically stupid that it seems to have been untouched by thought. He had to do it, like a man with a full bladder who doesn't think about his shoes.

Writing up the speech, The Washington Post made it sound like Trump had gone haywire: “As Donald Trump took the stage in a community college theater on Thursday night, something was off. The usually punctual executive was nearly 40 minutes late. His voice was hoarse, his hair mussed, his tone defensive.” But going by YouTube, Trump's voice and tone seemed pretty much the usual, and his hair was far more coiffed than mussed; perhaps a couple of cowlicks had broken out along the part, but the whole had its usual solidity, not to say sculptured weight. Trump seemed to be in a good mood. Apparently he talked longer than usual, but he's an exuberant type. The first version of the Post article reported the Carson nuttiness without dwelling on the ominous touches about behavior. A few hours later, there they were; seems like hindsight was dressing up the story.

But even so. That stuff about the mussed hair and something being off should’ve been true. A speech with the Tourette's episodes and the Carson interlude ought to be strange all the way around. It's weird when you see a man with his hands on his midriff, crotch toward the public as he yanks his belt up and down. That was Trump explaining why Ben Carson's story about the belt buckle and the stabbing is a big laugh. I mean, ostensibly that's what Trump was doing. I think he was thrusting his personal meat at the Iowans. Next stop he'll be reaching behind himself and scooping out invisible handfuls for flinging; he'll say he's demonstrating how Carson's trousers are a bad fit.

Trump can't breathe when he's pretending that other people come first. It messes with his system. For months now he's had to live with an Iowa whose opinion counts. For the past three weeks he's had to live with an Iowa that puts him second to Carson. Last week some of the national polls got in the fun: Trump's long run at the top was broken, and Carson was there instead. Not by much, and not in every poll, but being first was no longer his sole domain. On Thursday we saw Trump's self-control burst.

The base doesn't like attacks on Carson, and Iowa doesn't like attacks on Iowa. There were good reasons for Trump to hold himself in. He couldn't because his character is malformed. Maybe not pathological, but as a boy he threatened to call the police because a little girl's ball fell on his lawn. As a man he acts the same way. He seems to be happy enough regarding his parents and kids, so I guess he isn't neurotic. His personality doesn't malfunction and cause problems. It functions and that causes the problems. God has his jokes, and one of them is Trump's personality. It's set up wrong.

For five months we've been watching Trump and wondering if he was acting out a spasm or a plan. He wanted it to be a plan; he wanted to set his course and govern his mouth as a candidate going for the top prize. But maybe his campaign has really been more of a spasm. Trump can't tolerate a world that doesn't, finally, make him president, so he runs. But neither can he tolerate a world where he is second in Iowa, or where Megyn Kelly rolls her eyes when his name is mentioned, or where Bill O'Reilly talks to a columnist Trump doesn't like. Trump is always bursting, and he can't cope. Now he's splattered himself up to the chin.

I hate to agree with pundits, but the Fort Dodge episode may finally cause Trump to spring a leak. Yes, Trump sneered at John McCain and POWs without suffering damage. But Quinnipiac says Carson has 76 percent net favorable with Republican voters; McCain is trying to stay afloat in his primary next year. Nor does the GOP base get touchy about POWs, not when it has Benghazi. The base doesn't carry all that much from the past: a picture of Ronald Reagan, a clipping about Vince Foster or Monica Lewinsky. They've thrown out tons, at least a decade's worth of failed memories, and they're desperate for replacements. Ben Carson is a replacement, John McCain is a failed memory, and POWs are no memory at all.