It's your very own people, not anarchists, right-wing provocateurs or outside agitators. 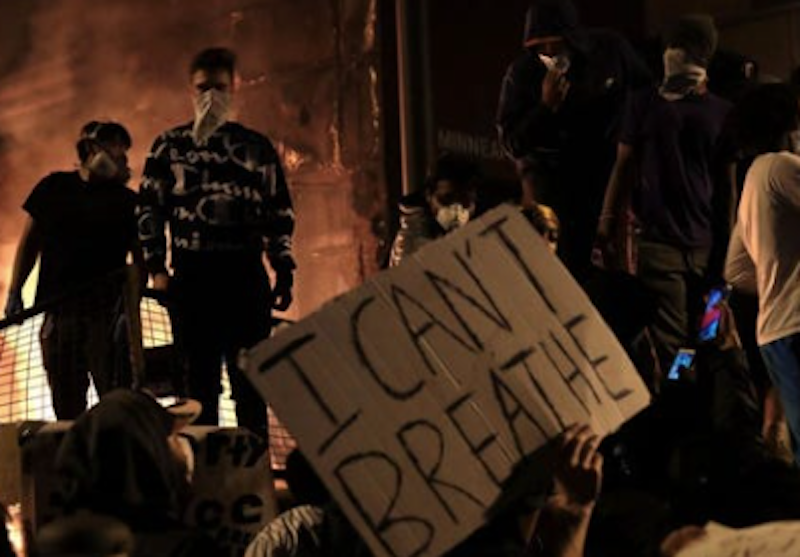 The first thing mayors and governors will do, again today, is apparently admit that the people attacking the institutions they represent are right, devoting 30 seconds to "I think it was murder. I am outraged, like you. I know this city sucks, but it's not my fault. We've got to pull together." And then: "There are two kinds of people out there: people who are outraged by George Floyd's killing and who are exercising their First-Amendment rights of self-expression. And then there are people, probably from out of state, who are here to destroy our city. They don't care about George Floyd at all, and are dishonoring his memory."

The Washington Post points out that Minnesota or national officials "variously assigned responsibility for the escalating violence to far-right nationalists, left-wing radicals, drug cartels and possibly foreign agents in statements, news conferences and presidential tweets." They provided no evidence for any of that. St. Paul mayor Melvin Carter asserted flatly that 80 percent of the people arrested in his city were from out of state (then he took it all back), as other officials nodded along. Amy Klobuchar came very close to demanding that a wall be built along the border with Wisconsin to prevent the further ingress of outside agitators.

There were protests in virtually every state, as each tried to blame the people of other states, while also calling for us all to pull together as Americans in this ass-wipe time. According to the authorities, it would seem that whole cities have been switching places for some reason, exchanging rioters. It's all a pitiful bunch of bullshit, and authoritarian bullshit, to boot, in the service of white supremacism.

Similar authorities purported to believe that the daytime peaceful protests after the assassination of Martin Luther King were genuine expressions of grief and anger, and the fact that city blocks started burning that night was the work of outside criminal elements, communist infiltrators, and so on. People comforted themselves and one another with the same pseudo-distinction after the 1992 Los Angeles riots following the Rodney King verdict: the people who were semi-understandably outraged vs. the “thugs” and “gang members” who were looting stores.

That you wish something were the case, or that it would make things easier if everyone else believed it to be true, is not any evidence for it. It'd be nice to think that "This is just not who we are as Minnesotans." Then again, who Minnesotans are is perhaps better demonstrated by what they’re actually doing than by a wishful yet pernicious little story their "leaders" are cooking up. Some people are expressing their anger by taking a knee in the street for eight minutes with their hands up. And other people, or the same people, are burning police cars. Don't ask me to infer from the latter sorts of actions that the people performing them aren't genuinely outraged, you doinks.

What happened in '68 and in '92 was insurrection, directly and obviously set off by particular events that were emblematic of racist oppression. It’s evidently the same thing here. The re-narrators are trying to depoliticize the violence, or not to take cognizance of its political content. Meanwhile they’re responding desperately to it in a political fashion; the threat of violence is exactly why they start every paragraph with an acknowledgment of "legitimate pain and anger."

All sorts of people are trying to find any reason at all not to regard the violence as a political expression emerging from their own communities, even as their own reactions show that they know that it is. Of course, if it’s a political expression emerging from their own communities, the authorities are cast as the oppressors who are being resisted. So it's just going to turn out to be something else somehow, according to those authorities. It’s "anarchists," for example (the new communists). Prove it. It’s right-wing provocateurs. And finally, it's "criminals." And what does Minnesota governor Tim Walz picture when he pictures a criminal? Perhaps someone who looks like George Floyd.

It's true that if people are looting stores, that's in part because they want the stuff inside. But the distinction between sheer criminality and political expression dissolves in these cases. One effect of gazing at something like the Rodney King beating or the killing of George Floyd is that it's liable to give one the experience of being psychologically released from the rule of law, and for extremely good reasons. One might rationally emerge from the experience of viewing the videos with the conclusion that one can’t possibly be under any sort of moral obligation to obey the police.

It’s often said that the rule of law rests on an implicit social contract, perhaps among the people as a whole, or between the people and the authorities. That’s one justification for the alleged fact that observance of the law is incumbent on each of us: we’ve agreed to it, by also accepting its protection and the other benefits of being a member of a reasonably well-ordered society. Well, contracts can be broken if one of the parties is in massive breach. And one thing those videos show is a legal system in massive breach of any social contract that may have existed.

If you came out of the experience of viewing those videos feeling that you and people like you had been released from any moral or contractual obligation to obey the law, you’d be drawing conclusions compatible with the political philosophies of John Locke and Thomas Jefferson. In a context of an overwhelming history of racially-oriented police brutality and mass racial incarceration, it's going to be difficult to maintain that the exercise of authority and the rule of law rest on the consent of the governed.

So, mayors and governors and Senators and prosecutors and police chiefs, decry and discourage the violence. But don't pretend that it's not intended as a message to you from the people you supposedly represent.