Walking the streets of Virginia as history plays out across the country. 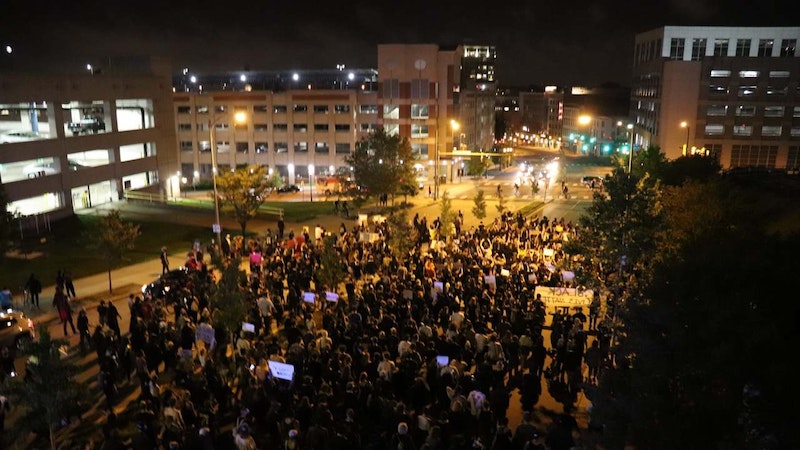 I went out after midnight on Saturday evening here in Richmond to get a look at what the protesters were up to. The first thing I saw was a bunch of people with spray paint cans at the national headquarters of the United Daughters of the Confederacy on Arthur Ashe Blvd. Some on the Left believe UDC’s the female equivalent of the KKK, although its chief archivist is a black woman. They were scrawling messages all over the stone building—"kill pigs, "police are creepy," "fuck 12" (fuck the police), "built on our backs," etc. The riot soundtrack was playing in the background—the chuf of helicopters circling in the sky overhead mixed with the blaring of sirens coming from all directions. The police were on the way. I didn't want to be there when they arrived, so I left.

Later in the evening, the mob set the building on fire. Nine fire trucks arrived at the scene to extinguish the blaze. They’d already defaced the bases of the massive Stonewall Jackson and Robert E. Lee monuments, just blocks away, with similar scrawlings. I'd heard talk of taking the monuments down that evening, but you'd need heavy-duty industrial equipment to topple those massive structures. They’d been defaced before, of course, but nothing on this scale. My first thought was to wonder why this took so long to happen. Those statues of Confederate generals who fought to preserve slavery are imposing in their size, dwarfing the modest Arthur Ashe monument that went up many years later on the same street, Monument Ave., Richmond's grandest boulevard. The contrast is disturbing, especially since the tennis great wasn't allowed to train in the city's top tennis club as a youth because of his race.

I walked back to the UDC building the next morning and caught a strange scene upon arrival. Several civilians with AR-15s slung over their shoulders were standing on the front steps, guarding the place while several cops stood off to the side. An older man, enraged, went up and snatched the American flag they were displaying. “I fought in two wars for this flag," he screamed, "and I don't want it in your hands." "Give it back," said one of the armed men, but without much conviction. He knew there was no way to win this battle, and he was barely going to try. "Take it from him," said one of the taunters in the crowd who was holding up two extended middle fingers. "No, I'll let the sheriff do that," he replied. The angry veteran left with the flag.

When I returned in about an hour, the armed men were standing inside yellow police tape, while the cops were standing outside of the tape. Liberals would say that the police would never allow black men such leeway, but I'm not really sure. I've seen plenty of photos from the 1960s of armed Black Panthers standing on the steps of public buildings, unmolested by the cops. The police really don't want to mess with anyone who’s carrying a firearm legally, and Virginia’s an open carry state.

The denim-clad armed men weren’t aggressive. They stood silently with blank expressions on their faces. A bunch of people who looked like they'd been at the building the evening before heckled them from a distance. "Black lives matter," said someone. "All lives matter equally," replied their leader, in a friendly tone of voice. That's the familiar, tiresome call and response of the American Left and Right as they talk over each other. A black man spoke eloquently about the black struggle. The men didn’t reply. They weren’t there to defend the police, or deny the black struggle. It was hard to see them as the bad guys in this face-off. They weren't breaking the law, and they hadn't committed arson a few hours ago.

When I returned one more time, in about 30 minutes, after inspecting the "new look" of the Confederate monuments, the armed civilians had vanished. Police officers were now standing both inside and outside of the tape. I regretted not witnessing the changing of the guard, but doubt it was too contentious. While many on the Left would characterize them as armed lunatics, they didn't appear crazy or dangerous to me.

There was a palpable feeling of menace in the air on Saturday night that I'd never felt in other protests. But I'm not sure you could call it a protest at that point. Recently, the legitimate protests happen during the daylight hours. Late into the evening, when the controlled rage is put aside for the day and the id takes over, they morph into wilding packs who need to destroy things to achieve some sort of catharsis. During my brief time at the UDC building that evening, I sensed a collective urge to settle some scores that weren't directly tied to the outrageous police killing of George Floyd.

You can hear about a police precinct house burned down in Minneapolis and understand the motivation. And when you learn that a Target was looted, you can at least get that people who've had to struggle financially for years might take advantage of an opportunity to get some things for free, even though that has nothing to do with the cause at hand. Conservatives are having none of it, but white liberals have been convinced that looting and burning stores down in your own neighborhood in a race riot is a justifiable reaction to the oppression that black people have always faced in this nation. You're not supposed to wail about the self-destructiveness of such actions because you can't understand their emotions. But what’s a good liberal to think when the mob incinerates a city bus, as happened here on Friday evening? The Richmond transit authority said it was thinking of shutting down service if it didn't believe it could keep its employees, who are mostly black, safe. What does it mean when a protest produces a mob that's ostensibly reacting against the murder of an innocent black man, but then endangers the ability of black people to get to work? You're getting into nihilism territory there. You can at least attempt to make the case that Target is part of the oppressive infrastructure of capitalism, but there's no way, from a leftist point of view, to classify public transportation in a negative light, especially since the majority of its riders here in Richmond are black.

There was a fire in the early hours of the next morning. When firefighters arrived, the mob tried to prevent them from entering the building. Reportedly, there was a child inside. The police had to rush in and teargas the crowd to disperse it. How does even the most hardened leftist justify such depravity?

Just before submitting this article, I learned that an 8 p.m. curfew had been imposed on Richmond. With the government-mandated shelter in place order already in effect, we’ve finally achieved peak authoritarian state. The government wants me to think it's doing everything it can to keep me safe, but I just feel uneasy.