Polite expressions of regard. 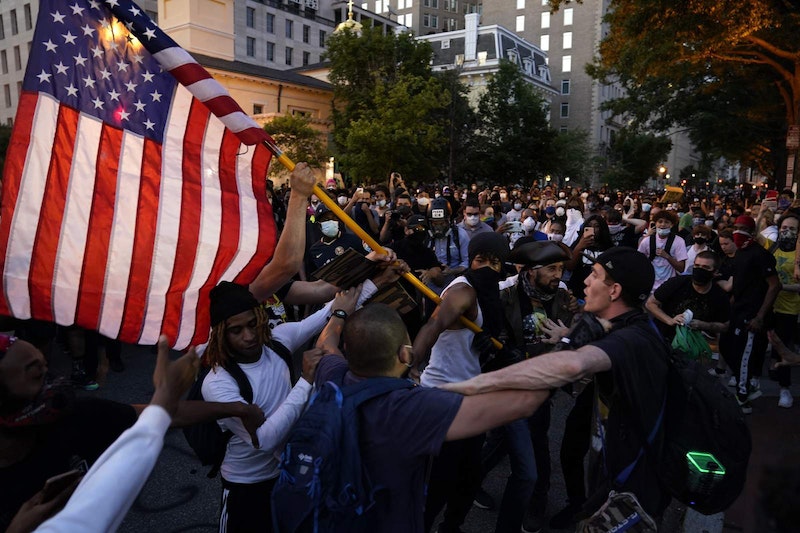 “I just told him I want justice,” said the victim’s brother. “I said that I couldn’t believe that they committed a modern-day lynching in broad daylight. I can’t stand for that. I can’t.” But the poor man was talking to Donald Trump. “He didn’t give me an opportunity to even speak,” said Philonise Floyd, remembering the phone call he received after the police killed his brother, George Floyd. “I was trying to talk to him, but he just kept, like, pushing me off, like ‘I don’t want to hear what you’re talking about.’ And I just told him, I want justice.” The news story relating this notes that Trump later said, “I spoke to members of the family—terrific people.”

From The New York Times: “Sean Hannity and Laura Ingraham condemned the demonstrators for, in Mr. Hannity’s words, ‘exploiting’ Mr. Floyd’s death.” Sean hates to see disrespect to a good man’s name. Trump feels the same way: “These THUGS are dishonoring the memory of George Floyd, and I won’t let that happen.” That’s the first sentence to his famous “looting starts, shooting starts” tweet. The facts in Floyd’s case are stark and well known, and the two shit-meisters are hemmed in to that degree. To stay on public opinion’s good side, they must shed crocodile tears before they do their agitating and accusing.

How much is this because of white opinion? A lot, one might think, since Fox doesn’t care about black viewers. On the other hand, the Trump campaign’s been trying to peel off some votes among black men. But trying this hard? (“MAGA loves the black people.”) For now even a lot of conservative whites seem unable to ignore the clip of Floyd’s death. That’s remarkable, but we’ll see how Trump plays things after the right has seen a few more days of riot footage.

African-American. In the Central Park dog-walking case, the lady said African-American. An op-ed at The New York Times reads a lot into this: “The moment provided a bracing tutorial in what bigotry among the urbane looks like—the raw, virulent prejudice that can exist beneath the varnish of the right credentials, pets, accessories, social affiliations, the coinage absorbed from HBO documentaries and corporate sensitivity seminars.” Yeah, I’ll give you urbane. Donald Trump, June 2016: “Look at my African-American over here.” Where are your pets and HBO documentaries now?

Using “African-American” says nothing except that a person has learned there’s a polite way to talk about black people. Such politeness is often a smart move; for example, when cameras are present or 911 is taping you. Of course, the person’s heart may not be in it—“my African-American.” Trump wanted to say “my black guy” or “my black.” But camera behavior means the full bib and tucker. “African-American,” Trump says. “African-American.” He says it eight times during the clip, an average of every 15 seconds. He’s telling the story of a black guy at one of his rallies, “this great guy, military guy,” who saw an anti-Trump protester wearing Klan gear and punched him—“coldcocked him,” Trump says. “The African-American guy said, ‘I had enough.’”

Funny, Trump heard the same thing this weekend. Meanwhile, his black guy left the GOP last year. “He and the party have just shown that they have no interest in any other group but whites,” the man said.