The Logic of a Trump Reelection

An abstract analysis may be counterintuitive. 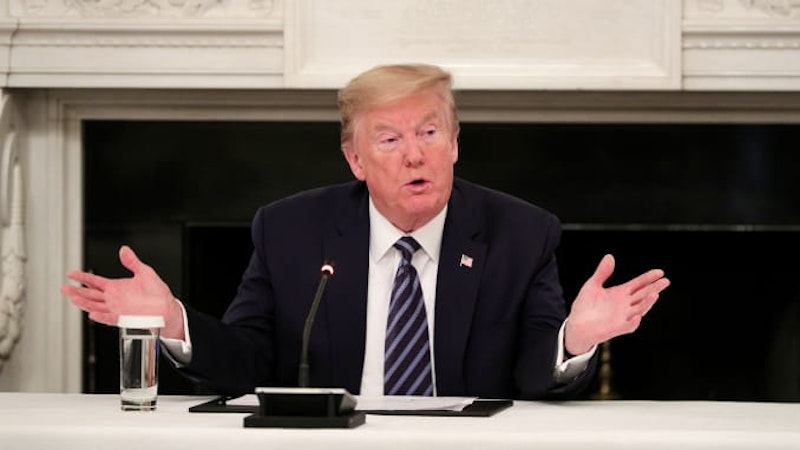 Propositional logic is a field at the cusp of math, computer science and philosophy that draws out the implications of statements, or propositions, being true or false. For example, let’s say you have a statement that “2 + 2 = 4” and one that “Donald Trump is currently president.” We’ll call those, respectively, statements A and B. Because both are true, the statement “A and B” is true. So is the disjunction “A or B," since it means that at least one of the statements is true.

The system is abstract and sometimes counterintuitive. Consider the conditional statement, “If A, then B.” That means that if A is true, we can expect B to be true, regardless of whether there’s any real connection between the two. “If 2 + 2 = 4, then Donald Trump is currently president” is a valid logical statement. “If 2 + 2 = 4, then Donald Trump is not currently president” is invalid, though, because it goes from true premise to false conclusion.

Interestingly, “If 2 + 2 = 5, then Donald Trump is currently president” is logically valid, and so is “If 2 + 2 = 5, then Hillary Clinton is currently president.” In standard propositional logic, a conditional statement starting from a false premise is true, regardless of its conclusion. As odd as that may seem, it follows from the requirement that “If A, then B” must be either true or false. The statements “If not A, then B” and “If not A, then not B” leave “If A, then B” intact.

Now let’s consider the presidential election. As in previous elections, there’s once again a binary choice; no third-party candidate will have any chance of winning. This amounts to a bi-conditional: “If not Trump, then Biden” and also “If not Biden, then Trump.” In 2016, “If not Trump, then Hillary” was enough to sway a number of voters to put aside their qualms about Trump. This year, however, polls show that people who dislike both candidates are in more cases intending to vote against Trump, now a known quantity as president.

At a more fundamental level, in each presidential election the parties bring a more or less enduring proposition to the table. The basic promise of the Republicans could be characterized as “If there is a Republican president, America will be strong,” with military power, economic growth and adherence to traditional values all seen as manifestations of strength. The Democrats’ basic promise boils down to “If there is a Democratic president, America will be fairer,” defined by more equitable treatment of various disadvantaged groups.

The two propositions are about separate subjects (“strong” versus “fairer”) and so aren’t readily combinable. Possibly, some people will agree with both propositions and then cast a vote based on whether they care more about strength or fairness. In practice, I suspect the election will mostly boil down to what voters think about whether “If there is a Republican president, America will be strong” has turned out to be a true proposition in the Trump years.

The question boils down to whether the Trump presidency has made America strong, or at least stronger than it would’ve been without a Trump presidency. Pandemic and recession notwithstanding, Trump can’t allow a perception that the country has been weakened by his presidency. That’s why his response to the crisis has been so marked by floundering and denial. A six-figure death toll and double-digit unemployment undermine the conditional statement of what a Republican president would do, and thus show a Trump re-election has no basis in logic.