Demand a New Way of Life

Does anyone really want to go back to "normal"? 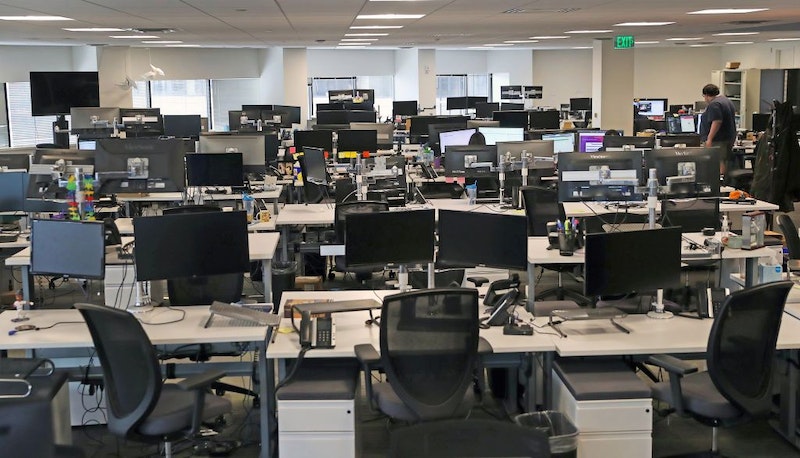 A quick scan of the media suggests there’s a significant portion of the workforce that’s champing at the bit to return to work. Some carry guns. Meanwhile, from their makeshift home offices, others wonder what all the fuss is about and would rather not catch the virus.

Is it true, though, that we really want to go back to work, business-as-usual? When the crisis started, libertarians were surprised that people didn’t immediately take to the streets in defiance of government-imposed quarantine. Libertarians value civil liberties above nearly everything else.

The Libertarian Party’s preamble: "As Libertarians, we seek a world of liberty; a world in which all individuals are sovereign over their own lives and no one is forced to sacrifice his or her values for the benefit of others.” Libertarians assert that the key affront to civil life is the imposition of controls and the restriction of civil liberties. Dr. Jo Jorgenson, recently elected Libertarian Party presidential nominee, called the federal government’s response to the pandemic “the biggest assault on our liberties I’ve seen in my lifetime.”

It’s a belief within libertarian circles that this sentiment is shared by many, including non-libertarian conservatives and others, even (perhaps especially) in the anarchist left. Many libertarians would claim this is rooted in the heart of the American psyche. It was surprising, initially, that, despite being justified by a deadly virus that threatens to take millions of lives across the world, people largely acquiesced to dramatic social control measures. Only in wartime, when under direct attack, have such controls been seen before.

We’re now starting to see people emerge onto the streets, some aggressively, others with placards, some wearing facemasks; many not. People want their lives back. They don’t want to be forced to stay at home, yet most remain there. Many have lost their jobs or have been sent home and they’re not protesting. Why? Some will say “for the common good, to prevent the spread,” others because they don’t have a job to return to. Perhaps the libertarians were wrong about our base priorities.

While markets have recovered somewhat, we’re still a long way from understanding the impact on the real economy. It’s impossible to state how big the effect will be because there’s no historic equivalent. Anyone making bold predictions right now is just speculatng. There’s no reason to believe things will return to what they were soon, perhaps not for a decade.

Which raises another question as we sit at home, un- or under-employed, relying on what government welfare there is or savings: do we really want to go back? What is the real meaning of freedom and liberty? Do we want to commute two or more hours a day to get an average paycheck? How many jobs require a commute? Can we perform our former jobs from home? The role of supervision can’t be denied in expecting people to go to the factory or office. Capital must always strive for efficiency and whipping people into line is easier when they’re a short, angry walk away. But if we’re so good at self-isolating, maybe we can also be trusted with working diligently from home.

Some jobs require physical presence. Factory and supermarket workers, teachers, nurses, construction, transport, food service, etc. These are the critical jobs. Society simply can’t run, at its current size, without the mass production and logistics of this essential work. These are the people we should value most. The opposite is true.

The people who can work from home are the office workers, those whose contact with others is via computer or telephone. Even doctors can do consulting work this way, although that can hardly be recommended. We have the technology to do it all at home. Many of the jobs that were immediately reduced or cancelled, fall into what some call “make-work.” These are jobs that society has created almost out of thin air, through increasingly complicated work practices and regulatory standards.

People in make-work positions know who they are, but their livelihoods also depend on that income, so we can’t begrudge them that work. We could, however, examine their labor relations and say, well, perhaps without them, their company would be more profitable. That profit is then available to taxation and the government could step in to relieve us of the make-work economy and still provide for the people so affected.

Relieving the economy of unnecessary work implies that the hyper-regulation of every avenue of business and life that creates these make-work jobs would also have to go; a scaling down of government, libertarian style. How should we balance less red tape against the need to provide for those not fortunate enough to be able to find meaningful work?

The gig economy of the last decade was both a blessing and a curse, with some successful entrepreneurs finding their work drying up as people now without jobs flood the market with their skills. The gig economy is like the libertarian dream. It works for some, but even they are now struggling, competing with the masses rather than just a niche.

We sit, working out how to house, clothe and feed our families, reading books we always said we’d read, catching up on streaming shows, having zoom calls with friends and family we never used to talk to, tidying our house and discovering new pride in our lives, however modest they may be. We’re right to ask why we put up with the dreary commuter make-work life that civilization has imposed upon us for 100 years or more. Maybe the heaviest impositions of society were there all along. Maybe we’ll fight back peacefully by demanding a new way of life.