Whether by strangling or arson. 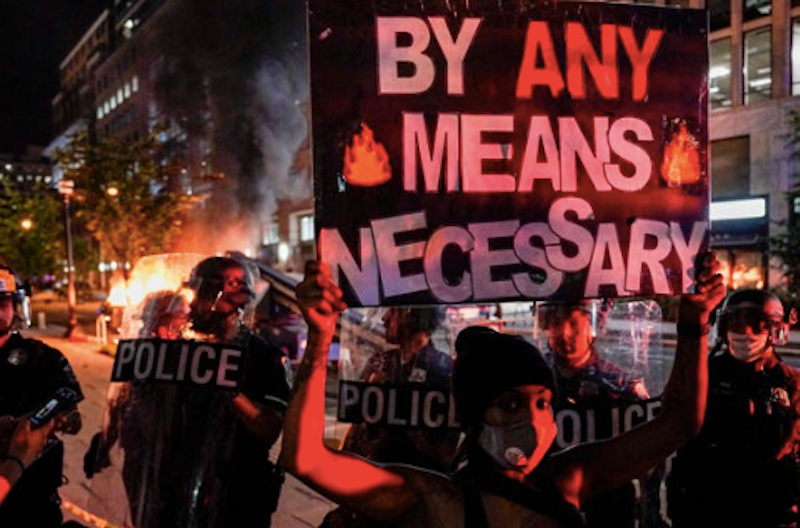 I don’t know any conservatives who think that because looters exist, cops should be forgiven for strangling immobilized arrestees.

By contrast, it turns out I do know some leftists—and you probably do, too—who appear to think that if a cop commits murder, large numbers of innocent third parties (even black third parties) should have their businesses and cars set on fire.

Those leftists are evil barbarians, not to mention people with impoverished imaginations if they can’t think of any alternatives besides the strangling and the arson. (It appears I know two fewer of them than I did a few days ago, judging by a couple exits from my Facebook friends list. Female Brooklyn-hipster types, naturally—the worst, most vicious, most self-righteous demographic alive, as I’ve repeatedly said.)

I also know a fair number of liberals who, spineless, won’t come out and say they’re pro-riot but will say huffily that it’s inappropriate for anyone to choose this time to complain about little things like looting and arson when we could talk about the strangulation exclusively. (It’s tempting to play their disingenuous, sanctimonious game by agreeing to talk exclusively about police brutality, then become enraged at them for not talking about, say, the slave trade. Do they want me to be myopic, etc., etc.?)

Doesn’t it seem likely that talking consistently about assault in general, whether by common criminals, cops, or politically-subsidized rioters, might be the best way to get the message across that all that behavior is evil and must end? Isn’t it obvious by now that anything else just perpetuates the tit-for-tat thinking that leads to cops treating citizenry as an opposing gang and rioters treating all of civilization as equivalent to murderer-cops? Do you honestly want to end this sort of thing or are you secretly enjoying it—like many a smirking cop, looter with a new free TV set, or college professor proud to show solidarity with those hot young campus activists?

The only thing stupider than the mayor of Minneapolis tweeting through this weekend’s rioting about how it’s being caused by white supremacists and foreign agitators—anyone except his police force or some of his black citizens—is the “property can be replaced” mantra that keeps getting repeated on the left, possibly even more among “respectable” left-liberals than among the Marxist far-left sorts, since the latter at least admit they don’t want property to be replaced or exist in the first place.

You know you’re hearing from comfortable, insurance-policy-possessing liberals when they assume the loss of a life’s savings, beloved family business, or (in one case from the current riots) an entire burned-up apartment complex is no biggie and can be quickly remedied, with everyone involved learning some heartwarming lessons about proper police conduct in the process.

It makes sense that these are often the same idiots who like the sound of Sanders/Ocasio-Cortez-style “Modern Monetary Theory,” with its assurance that money can just be endlessly printed for good works with no offsetting decrease in the value of money being used elsewhere throughout the economy (used by innocent people unaware they were just stealthily robbed). Hey, we all wish Star Trek replicators were real, believe me.

Twitter at least imagines itself to be helping calm things down. Long known for having a high tolerance for users who coordinate riots or even terrorist actions, Twitter nonetheless flipped out and briefly blocked Trump when he wrote the supposedly inflammatory words, “These THUGS are dishonoring the memory of George Floyd, and I won’t let that happen. Just spoke to Governor Tim Walz and told him that the Military is with him all the way. Any difficulty and we will assume control but, when the looting starts, the shooting starts. Thank you!”

Twitter said that “violates our policies regarding the glorification of violence based on the historical context of the last line, its connection to violence, and the risk it could inspire similar actions today.” Will Twitter take as hard a line against people glorifying the riots themselves, in far more explicit words, one wonders?

Not that I can blame the Twitter bosses for being in a bad mood after Trump’s executive order threatening, in a fashion neither libertarian nor conservative, to regulate Twitter. But there are more obvious threats to free speech amidst the current tumult. How about Minneapolis police arresting a CNN crew, for instance? Or that Atlanta protest mob attacking the CNN HQ, inspiring Trump to retweet a tweet saying CNN had encouraged this behavior, so “Oops.”

But those vandals were no Trumpers, to be clear. The left’s on a rampage, and press credentials will not save you.

Despite the left’s desperation to blame all bad things on Trump, much of the blame for the current chaos lies with leftist agitator groups. Meanwhile, the “intersectional” professoriate goes right on stoking the flames, encouraging everything to be examined six times over through tribal ethnic lenses, all while pretending to be the coolly dispassionate ones who know how to foster peace. Psychopaths.

I notice one ostensibly not-primarily-political tweeter saying she’s “squealing like a kid on Christmas” over all the riots breaking out, which raises serious questions about what some people think a happy ending looks like here.

The widow of George Floyd, the man strangled by Minneapolis cops at the beginning of all this, says her husband wouldn’t have wanted rioting (while CBS edited out the bit with her saying the deceased would even want forgiveness for the strangler cop). Meanwhile, overwhelmingly white activist groups such as the Anti-Capitalist Bloc seem, in an odd coincidence, to be stirring up street fights from the U.S. to Slovenia, as if there are plenty of international and well-funded people just waiting to use something like Floyd’s death as an excuse to run amok.

In New York City, with his usual brilliant timing, Mayor de Blasio has sent cops to confront peaceful crowds lingering outside bars and restaurants (remember coronavirus?), so it’s probably only a matter of time before one of those batches of revelers find themselves treated as unceremoniously as Antifa brick-throwers. Ideally, those who aren’t initiating an assault would be left alone, whether by cops or other mobs, and those who initiate assault would be punished (proportionally and in accordance with law) as individuals, without their entire neighborhood, race, or camera crew getting punished along with them.

That’s the essence of any truly modern, civilized notion of justice: proportionally punish the guilty individual, and leave the rest of the village out of it. Far from being a blinkered, insufficiently-intersectional view of things, that’s the only way humans ever learn.