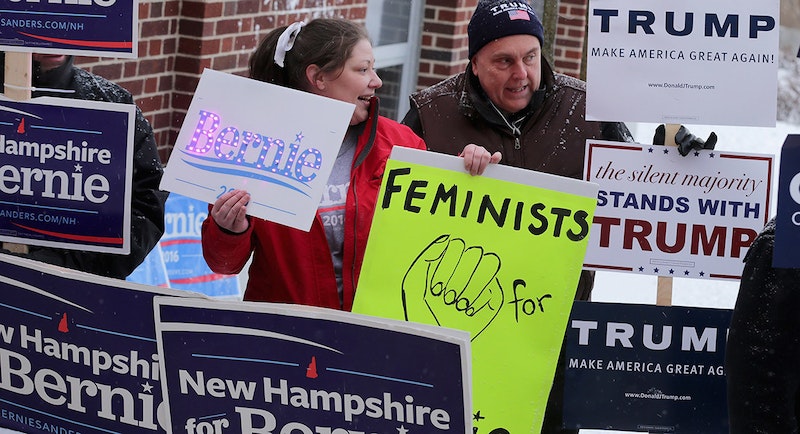 If the country is finally turning socialist/fascist (as Tuesday’s presidential primary results may suggest), at least I no longer have to worry that it’s just the libertarians who are doing so. That means the whole culture is in trouble, of course, but that’s less embarrassing to me than if it were only the libertarians. And they have indeed been sounding more like socialists and fascists over the past few years.

I hope that still strikes readers as a surprising assertion, since libertarians are supposed to be the staunchest of all advocates for shrinking or even eliminating government and maintaining strong property rights to foster a booming free market. I will have a book out in two months describing the philosophy and its factions, called Libertarianism for Beginners. Though people are always tempted to lump all their enemies in one category, I think it’s safe to say libertarians never bore much resemblance to socialists or fascists in the past.

Yet the temptation always exists for a tiny political faction to imitate or ally with larger ones in hopes of having a greater impact. For a few decades, that meant libertarians often sounded like liberals or conservatives, and my book goes into some detail about that era, but perhaps it is one that will soon end.

So, astoundingly, there are some Bernie Sanders-sympathizing libertarians emerging (as this piece by Andrew Kirell suggests), Trump-sympathizing libertarians including Antiwar.com editor Justin Raimondo and past Libertarian Party vice presidential candidate Wayne Allyn Root, and even among faith-keeping mainstream libertarians like Nick Gillespie a temptation to half-celebrate the Sanders/Trump moment for at least showing us how weak the two major parties' respective establishments are.

Even farther out on the fringes, with increasing frequency, one encounters things like left-libertarians who insist on seeing “the free market as full communism” in a bizarre (and very 19th-century) effort to gloss over the obvious conflict between property rights and socialism—and neo-reactionary, far-right, or “alternative right” libertarians and ex-libertarians who think, much like the early fascists before they took power, that racism might be a useful glue for society once government’s no longer there to do the job (as if they’re trying to prove paranoid liberals right about everything).

Unable to wield much influence over mainstream politics (aside perhaps from casting a few votes for Sanders or Trump), naturally these two factions spend much of their time bickering with each other. The battle manifests itself in weird, petty ways such as a gay pro-gun Web page being taken over by an apparent anarcho-communist of some sort and turned into an anti-gun pro-Sanders page.

This is a deeper problem, then, than people just feeling pressured every four years to vote for a Democrat or Republican. Scratch a BS or DT libertarian and you may find someone who isn’t just reluctantly taking a lesser-of-two-evils side for the duration of another painful national election but rather someone with very deeply-held non-market or even somewhat anti-market beliefs. It begins to appear that libertarianism is just too dry and rational a philosophy to satisfy some people, so they turn to the same old collectivist, tribal solutions for solace as the rest of the population.

The problem is exacerbated by the age-old problem that weird, counterintuitive beliefs that have been driven from polite society—but which contain kernels of truth—can appear to have powerful insights to the newly initiated, gnostic power that must be further explored and tapped. This is how something like the mysticism-studying Thule Society a hundred years ago ends up mutating into the Nazi Party.

The ongoing heavy-handed efforts of the political establishment to pretend all is well and suppress rebels only adds to the fringe activists’ conviction that they must be onto something. I’m sure there are left-libertarians whose sympathy for Sanders is made even stronger by the Democratic National Committee working overtime to deliver more delegates to Clinton than to Sanders even after his overwhelming popular-vote victory in New Hampshire. Sanders is being shafted the same way Ron Paul was by the Republicans in 2012, they’ll say—which is true as far as it goes but doesn’t make socialism a good idea. I can only imagine the xenophobic rage if the Republican establishment manages to snatch their nomination from Trump in mid-convention this summer.

If mainstream libertarians had a proven track record of political success, it would be easier to tempt people away from the fringe, but prior to these recent left-libertarian and far-right-libertarian rumblings, arguably not too much was achieved by various liberal-tarian, neo-libertarian, paleo-libertarian, or moderate-libertarian experiments either, even though hundreds of millions of dollars were spent trying, usually without so much as creating one culture-sweeping meme.

At least with all those projects, though, failure just meant not persuading the rest of the world’s population, which was always a tough test. Now, by contrast, I’m starting to worry that libertarianism doesn’t even persuade libertarians, which you’d think would be a far lower bar.

But no amount of frustration with one’s own principles can magically make other principles correct. I’m sticking to pushing libertarianism—without weird exceptions or reformulations—whether other libertarians want liberty to happen or not, the jerks.