Triumph of the Insult 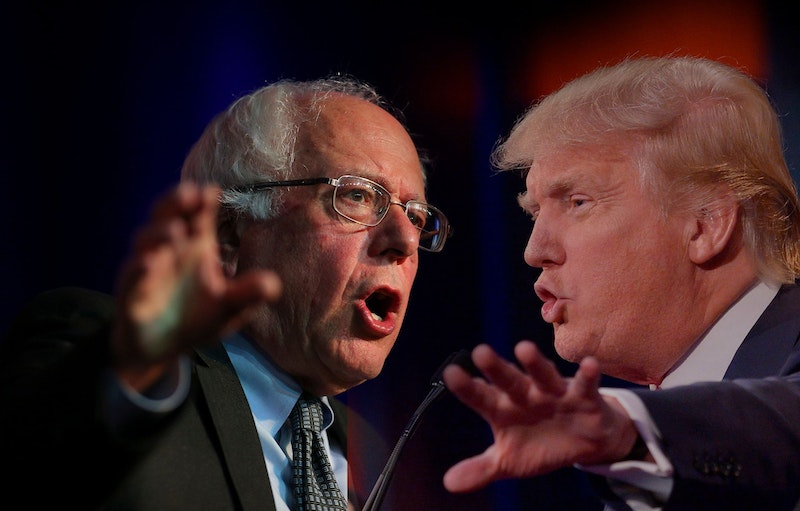 If Bernie Sanders and Donald Trump continue to win primaries, as they did yesterday, and go on to get their respective parties’ presidential nominations, this will be a pivotal election year for New Yorkers who yell and sound angry. It’s fitting that Triumph the Insult Comic Dog visited young people in New Hampshire during this primary season. To those fragile college students, he probably sounds like a presidential candidate.

Seriously, though, what happens in November, I wonder, if a candidate who “can’t win” (Sanders) meets a candidate who most of us “loser” Americans would never, ever vote for (Trump)? Yet horrible as it is to imagine, there’s something inexorably attractive about it all, like the cathartic massacre at the end of a Greek tragedy (called democracy). Left and right have long been each others’ co-dependent co-enablers, and it is fitting they mutate into the old monsters Socialism and Fascism at the end, even as the public thinks it’s participating in some sort of rebirth.

What we really need a polite-yet-funereal label for, though, if socialism and fascism really turn out to be our future, is the entire futile political tradition that contained liberalism, conservatism, and for a fleeting time libertarianism. Has there ever really been a good term that lumps all three of those factions together, perhaps in doing so even teaches their naively optimistic adherents that they were much the same (and similarly doomed) after all, despite that century or two of fighting? “Bourgeois democracy” and “moderation” don’t quite do the trick, especially since the former won’t likely end and Trump, at least, could make a strong (albeit strange) claim to the latter label.

Even if the “socialist” and “fascist” labels are too extreme—maybe you prefer “democratic socialist” and “populist” for Sanders and Trump, respectively—it is unquestionably true that if these two make it to the general election, one major party will have a previously non-Democrat nominee and the other a previously Reform Party-affiliated nominee. In some important sense, you’ve failed, mainstream political system—and you, too, America.

Perhaps we have finally become Europe, then: little talk of reforming the welfare state and a whole lot of talk of the left and the far-right, two things everyone used to say we don’t really have over here. A few skinheads in your local trailer park don't count, nor really did all those Marxist professors absent a candidate to represent them. They have one now, though his current near-stalemate with Clinton may keep the professors from celebrating for a little while yet.

I do have one quixotic remaining self-described “moderate Rockefeller Republican” friend who was up in New Hampshire during all this waving Kasich signs (Jonathan Funke: he and I appeared on the short-lived online video show The Run together, but that lawsuit is a story for another time). I’m happy for him that Kasich came in second. The establishment’s not completely dead, not yet. Then again, the establishment’s not so great either. Yes, I’m scared about what Sanders or Trump might do to global trade, but the very-establishment Clintons practically ran Haiti for the past decade or so, and how has that worked out? Yikes.

I don’t just worry about economic effects over the next few years, though. I worry about long-term political effects as well. Electoral success begets imitators: perhaps our future will be fascist and socialist demagogues as far as the eye can see. I’m not Catholic (I’m an atheist), but perhaps for Lent I will finally give up hope.

Or I can keep my fingers crossed that the Kochs and their allies finally decide to give a billion dollars to Libertarian candidate Gary Johnson. Maybe the Kochs have been away from the Libertarian Party a couple decades too long. Maybe a little working ski vacation with Gary Johnson is in order. It could save the world, you know. I’m running out of other ideas, anyway.